Zombies - Odessey and Oracle (Revisited): The 40th Anniversary Concert, The 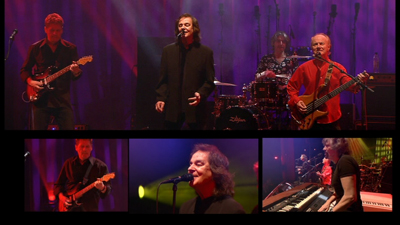 Band reunions are a tricky thing. Let's face it, it's never quite the same, and the older a band gets, the less likely that all the original members are going to be around and the magic is going to be far more elusive. Even when the band is sincere, when they aren't just cashing in, something is not quite right about seeing men in their fifties or sixties singing songs they wrote in their twenties. Not that I blame them for wanting to. If your dream was to make music, then who am I to cut off that lifeline? Audiences don't make it particularly easy for rock 'n' roll musicians to evolve, either. Too many people want it the way it was the first time, a distant past they can barely remember themselves--if they were even there the first time. I'll never forget arguing with one of my editors when I did music reviews, who complained that the Who had been playing a long, jammy version of "My Generation" on one of their late 1990s tours, insisting the classic track of youthful rebellion should be three minutes and no more. He was younger than me, and even I wasn't old enough to have been alive when that single came out. Not to mention his lack of Who knowledge was showing. Check your Live at Leeds CD, hipster; "My Generation" is almost 15 minutes long!

So, everyone stand up at their computers and give the Zombies a round of applause for doing the impossible. Their new concert DVD, Odessey & Oracle (Revisited): The 40th Anniversary Concert, chronicling a three-night gig in London in 2008, is what we hope all reunions could be. The two-hour show not only brings back the four surviving members of the group (the performance is dedicated to late guitarist Paul Atkinson), but it serves up a mixture of material from across their discography in a way that is fresh, honest, and altogether entertaining. Even better, the fellows don't embarrass themselves by cultivating some sad leftover look from a bygone era, or even trying to act like they are still twentyish punks with something to prove. Rather, they are confident musicians whose solid craftsmanship allows them to recreate their best material in a way that probably wasn't even possible in 1968.

Odessey & Oracle (Revisited): The 40th Anniversary Concert is actually more than a run-through of the band's psychedelic swan song. The show is broken into two distinctive sets. The first half of the show is devoted to what is referred to as "The Zombies' Touring Band," a group of musicians led by original members Rod Argent (keyboards) and Colin Bludstone (lead vocals) and featuring a string quintet. This band performs early Zombies hits like "I Love You" alongside solo work from Argent and Bludstone. The true highlights, though, are covers of Jimmy Ruffin's "What Becomes of the Broken Hearted" and Tim Hardin's "Misty Roses," the former transforming the midtempo, melancholy R&B number into an uplifting rock shuffle, the latter a beautiful, string-drenched elegy. Bludstone sounds amazing. His voice has deepened some over the years, but the original soft quality that made his singing so unique is still there. He's still got a fine set of lungs on him, and he and Argent both appear to be overjoyed to be on a stage. They approach the concert as a sort of "storytellers" session, sharing their history and inspiration in between numbers.

The second half of the concert is introduced by Al Kooper, the A&R man who helped Odessey & Oracle come out in the U.S. (He, unlike the band, clings to the ludicrous fashion of his youth; the man needs a style intervention!) He brings out the original band--Bludstone, Argent, Chris White (bass, vocals, and the main writer for the band), and Hugh Grundy (drums)--to perform their 1968 album in its full and original running order. The record yielded a couple of hits, including two of the band's best-known, "This Will Be Our Year" and "Time of the Season." Tacked on to this is the encore of the earlier smashes, "Tell Her No" and "She's Not There" (both penned by Argent). I am not sure the Zombies are that well-known of a band (though fans of Wes Anderson films or the Lars von Trier-penned Dear Wendy are certainly hip to the group), but these four songs are ones everyone knows, whether they can tell you who recorded them or not. Anyone hearing the harmonies on "Changes" will have to admit they are beautiful. The Zombies go all out to make these tunes sound the way we've always heard them, even bringing out a horn section for "This Will Be Our Year." Chris White struggles a little to maintain all the notes in "Butcher's Tale," but other than that, there is nary a fumble in the two-hour set.

Which actually makes it too bad that concert DVDs don't get bigger attention. If there was a way to get more folks to see this, I'd love for there to be a full-on Zombies revival. Their sound is so rich, so full of life, it's hard to imagine anyone resisting its gravitational pull. Odessey & Oracle (Revisited): The 40th Anniversary Concert is a slick production. Shot with multiple cameras and featuring sparingly used split-screen effects to give us various vantage points at once, it captures a band returning to the stage after four decades and proving they are as relevant and capable today as they ever were. I had low expectations going in, I'm not going to pretend otherwise, but I was totally won over. 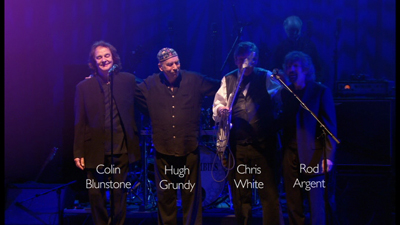 Part One: The Zombies' Touring Band: I Love You * Sticks and Stones * Can't Nobody Love You * What Becomes of the Broken Hearted * Misty Roses * Her Song * Say You Don't Mind * Keep on Rolling * Hold Your Head Up

Part Two: Odessey & Oracle: Care of Cell 44 * A Rose for Emily * Maybe After He's Gone * Beechwood Park * Brief Candles * Hung Up on a Dream * Changes * I Want Her, She Wants Me * This Will Be Our Year * Butcher's Tale * Friends of Mine * Time of the Season * Encore: Tell Her No/She's Not There 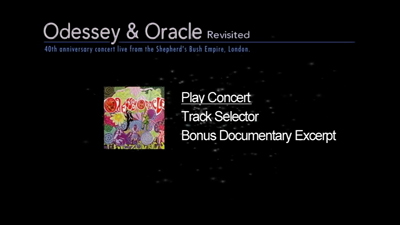 Video:
The DVD of Odessey & Oracle (Revisited): The 40th Anniversary Concert is blessed with a gorgeous widescreen image transfer. The colors are bright and natural looking, and the resolution is very good. It's a quality production for what could have been merely an easy tie-in.

Sound:
The sound quality is even better than the image. Mixed in both 2.0 and a naturally superior 5.1, the music comes across in full. The vocals and the instrumentation both occupy their own space, complementing one another while remaining distinct. There is no distortion when the volume is cranked, the manufacturers have considered that fans will want to play this loud.

Extras:
The DVD comes in a standard case with a folded one-sheet insert featuring liner notes, song credits, and performance details. The only on-disc bonus is a fourteen-minute excerpt from a (presumably) in-progress documentary The Odessey and the Oracle, with these pieces focusing on the origins of the seminal album, including the misspelling in the title.

FINAL THOUGHTS:
Highly Recommended. More than just a group of old guys getting together to make a buck, the Zombies prove in their concert film Odessey & Oracle (Revisited): The 40th Anniversary Concert that they are still a viable music force. Their seminal psychedelic masterpiece still sounds as fresh and vital as it ever did, and the band is at the top of their game. This is no nostalgic retread, it's instead a fresh polish on a glitzy treasure that should have been unearthed long before now. 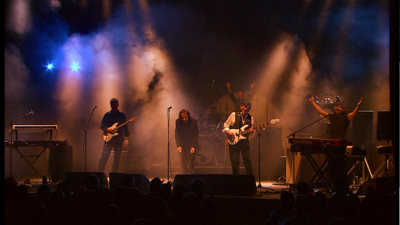