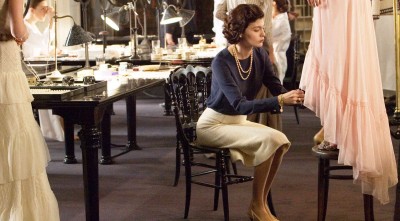 One of the first movies I reviewed here at DVD Talk was Coco Chanel, a biopic of the designer starring Shirley MacLaine originally broadcast on Lifetime Television. It was a terrible film that trivialized this remarkable woman's early life as a series of turgid affairs, without ever illuminating the sources of her artistry. I naively assumed that Coco Before Chanel, a French production starring Audrey Tautou, might right some of those wrongs. I presumed that a French director and crew would be more likely to treat a national heroine and global icon with a bit more probity. I was wrong. Not only is Coco Before Chanel an incredibly dull film, but it commits most of the same offenses as Coco Chanel, albeit with better production values and a more appropriate cast. Still, Anne Fontaine cannot resist the temptation to look at Chanel's youth as anything but a series of soap opera subplots strung together without ever asking the question "What made Coco Chanel a fashion revolutionary?" This is what she is remembered for, and despite Fontaine's best efforts, her reputation will remain unsullied by this empty-headed film.

As is usually the case, the writing is to blame. The plot of this film is almost identical to Coco Chanel: Coco (Tautou) is an orphan; then a seamstress; then a nightclub singer; then the kept woman of Etienne Balsan (Benoît Poelvoorde); then the lover of his best friend Arthur "Boy" Capel (Alessandro Nivola). This over-simplification is the film's fault. Along the way, Coco occasionally fusses about with fabric and hat-making, but we don't know why she's interested in such things or what kind of vision she has. It's just background activity for the predictable, rote romantic story.

The screenplay is the primary offender here. Its boring assumptions about Chanel's romances challenges neither cast nor crew, though they try hard. But they are up against a real drag of a story, and one that's already been badly told, too boot. Instead of investing this version with much-needed depth of character, it opts to essentially remake the awful Coco Chanel. This means a lot of cursory, expository plot development and character "moments" that deal strictly with the unconvincing romances. Chanel comes off as a bit more nakedly opportunistic here than in Coco Chanel, especially in terms of her romance with Balsan. But the affair with "Boy" Capel comes off as a Sex and the City-type female fantasy, and not the once-in-a-lifetime love that it actually was, according to Chanel herself.

It would be remiss to not credit the cast and the production crew. The performers try their best, and Tautou does invest the character with a credible hardness that develops gradually throughout the narrative. Poelvoorde is quite good as Balsan, too, and we feel his restrained pain when Capel shows up and sweeps Chanel off her feet. The film looks beautiful, with excellent photography, production design, and, yes, costumes (the movie was made with the cooperation of the House of Chanel). It's unfortunate that a film with such resources wasn't able to develop a fuller portrayal of its important, influential lead character. Coco Chanel's fascinating life is still waiting for a decent film.

The Video
The widescreen 2.35:1 image looks wonderful. The lush photography by Christophe Beaucarne is reproduced with loving attention to his use of low-light setups. The transfer is very solid, with deep dark blacks and artifact-free transitions from light to dark. One complaint: the yellow subtitles are jarring and distract from the image. White ones are always a better idea.

The Audio
The French-language Dolby Digital 5.1 soundtrack is quite good, but is not particularly active. Sound is consistently crisp, clear, and warm. But surrounds are limited mostly to ambient effects. The film just doesn't have a lot of action; it's a sedate track, but enjoyable.

A small set of rather good bonus features are included. First off is an audio commentary from co-writer and director Anne Fontaine; it's in French with English subtitles. The Making of Coco Before Chanel (46:14) is a thorough behind-the-scenes piece. Coco Before Chanel: The Meeting (18:17) focuses on Chanel herself and her influence. Walking the Red Carpet (7:50) features footage and interviews from the film's various premiere events. The Theatrical Trailer (2:03) wraps things up.

It's surprising how lifeless and "Hollywood" this French production is. I expected a more thoughtful treatment of this fashion heroine from her compatriots. Coco Before Chanel is fairly well-acted, but a silly script prevents the film from being anything other than an agreeable momentary diversion. Rent it.