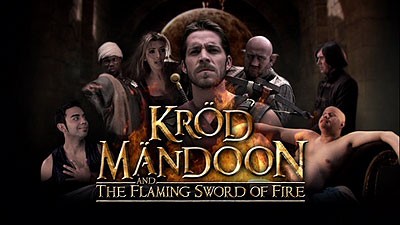 
The Show
I love a good historical spoof, which is part of why Mel Brooks is one of my comedy favorites. Instead of trying to bring the funny in a time-appropriate manner, he simply used the time-frame as a starting point and atmosphere setter, and told very modern jokes in an old-time setting. Watching Krod Mandoon and the Flaming Sword of Fire, I couldn't help but think of Brooks, and Robin Hood: Men in Tights in particular, and that's certainly not a bad thing.

Krod (played by Sean (Meet the Spartans) Maguire, a Brit playing a Brit with an American accent) is a leader in the resistance against Emperor Xanus (get it?), guiding his band of warriors in the battle for freedom. Naturally, it's a gang of misfits, including powerless warlock Zezelryck (Kevin Hart), dim ogre Quasto (Steve Speirs), and gay Bruce (Marques Ray), who brings little to the group beyond the opportunities for stereotypical jokes. Joined by Krod's on-again, off-again girlfriend, the beautiful pagan warrior Aneka (India de Beaufort), they make an ineffective fighting force, but a fun group to watch screw-up. 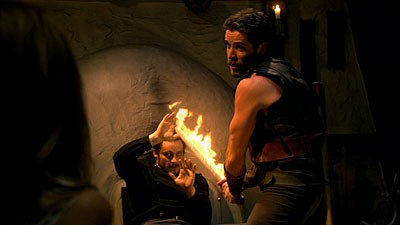 The series brings together a bunch of sword and sorcery and Middle Ages standards, including dangerous supernatural creatures, schemes to gain power and magical wizards, gathered around a season-long storyline about the rebellion and an all-powerful weapon falling into the wrong hands. The comedy isn't really about Dungeons & Dragons or the more humorous aspects of the plague, but instead fall close in line with relationship and workplace comedies, only dressed up more fancifully. So an episode about confronting a deadly cyclops is actually an uncomfortable encounter with a kinky loner, tilting the scale toward the surreal and hilarious.

That sense of humor is aided greatly by the presence of Emperor Xanus' top lackey, Chancellor Dongelor, played with over-the-top glory by Matt Lucas (Little Britain.) It is the role he was born to play, as he imbues this nutbar with the pomposity and lunacy you'd want in a psycho, killing subordinates with overwhelming ease and ruling with an immense ego. In many ways, watching him perfect the concept of the evil, yet idiotic leader makes one wish he could have been part of Black Adder. He would taken that brilliant series to an even higher level with his cheery madness.

Though Lucas is the main reason to tune in for this series, Maguire is very likable as the lead, a somewhat hapless hero who manages to succeed in spite of himself. Part of it is his very un-British accent, which makes him into an outsider right off the bat, but his displays of frustration with his team are great fun to observe, like his reaction to their observance of Casual Friday. That goes double for when he's dealing with Aneka, whose open sexuality makes it difficult for Krod to keep a level head about their relationship.

There are only five episodes to this series, with the first being double-length, so it's not much of an investment to watch the whole thing, but at the same time, if you enjoy it, it's over too quickly. On the other hand, if you liked the show when it was on Comedy Central, these episodes actually offer more to enjoy, as these are the BBC versions, which are longer, by about five minutes per show, and, according to the packaging, uncensored. Looking at these cuts, it's hard to figure out what needed cutting for American audiences, as the language isn't particularly harsh and there's nothing more explicit than Aneka's sexy dancing. 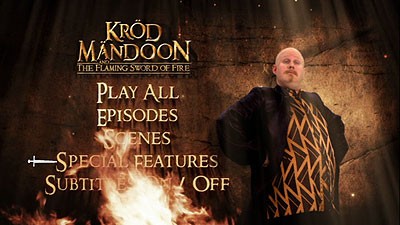 The DVD
Packed in a standard keepcase, this one-disc release features a static, full-frame menu offering options to watch all the shows, select episodes or check out the bonus features. If you leave the menu up long enough, the play-all option will kick in automatically. There are no audio options and no subtitles, but there is closed captioning.

The Quality
The episodes are presented in anamorphic widescreen, and they look very nice, capturing the show's production values quite well, including vibrant color and a great deal of fine detail. There are no issues with dirt, damage or digital artifacts.

When you look at the relatively lush visuals, you expect a strong audio presentation to match, but it's just Dolby Digital 2.0 tracks, though they do recreate the experience most had in watching the show on Comedy Central. There are no issues with the tracks, which feature clean dialogue, good music and solid sound effects, but you'd think they could be stronger.

The Extras
Things get started with a behind-the-scenes featurette hosted by Hart, running 4:35. It covers a bit of everything related to the show's production, in very little detail, but Hart's entertaining to watch as he messes around with the cast and crew. There's more info about the production in the nearly 11 minutes of casual interviews with the cast, including all of the main cast, except for Ray. The light atmosphere makes for some fun moments as they talk about the show.

The remaining extras are found materials, starting with over seven minutes of outtakes, which are tremendously funny, especially the interactions between Lucas and Alex Macqueen, marked by frequent fits of giggles, and Maguire's inability to unsheathe his sword cleanly. This is truly funny stuff.

There's a pile of cut footage available as well, including an alternate show opening (2:22), five deleted scenes (3:52) and eight extended scenes (8:20.) Nothing here was particularly eye-opening, but there are some amusing moments, and if you like the show, at least there's a bit more of it to watch. 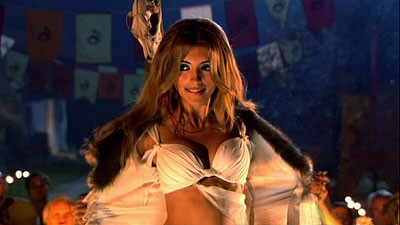 The Bottom Line
When I first learned of this series, I wanted to watch it, but I never did. Now, after taking it all in, I can't say I'm a devout fan, but there are a lot of worse ways to kill some time, especially with eye-candy like de Beaufort around. The DVD looks and sounds nice, and there's a small collection of bonus material that will be of interest to fans of the series, though its mainly found and promotional content. If you enjoyed any of Mel Brooks' historical comedies, or the great Black Adder, there's a good chance you'll get a kick out this show.