Paramount // Unrated // March 23, 2010
List Price: $39.99 [Buy now and save at Amazon]
Review by Stuart Galbraith IV | posted April 16, 2010 | E-mail the Author
While The African Queen (1951) has been available on DVD in other parts of the world - I still have my region 2 Japan DVD from 2003 - there had been no new home video versions in the United States at all since the last VHS release of the film in 1997. This makes Paramount's gorgeous Blu-ray edition all the more remarkable to the eyes. Though overly familiar to classic film fans that have watched it multiple times through the years, on Blu-ray The African Queen is something of a revelation.

I also like Paramount's approach to the extra features, eschewing the usual separate disc crammed with supplements, instead opting to consolidate everything into a single, superb hour-long documentary, Embracing Chaos: Making 'The African Queen.' In recent years I've grown extremely weary of labels overwhelming the viewer with extra features, subjecting him to an experience not unlike sifting through boxes of raw material at a research library. Casablanca? Maybe. But Barbershop 2: Back in Business? Forget it. Produced by Nicholas Meyer and directed by Eric Young, Embracing Chaos satisfies perfectly. 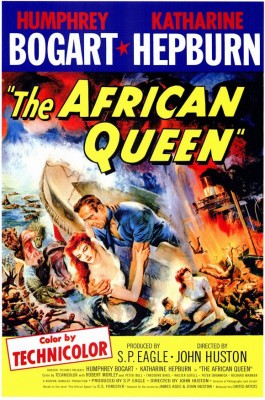 Did Katharine Hepburn ever actually look that glamorous?


The movie is based on C.S. Forester's 1935 novel of the same name; except for the ending and the nationality of Humphrey Bogart's character, James Agee (who did most of the adaptation) follows Forester's story quite faithfully for the film version.

At the outbreak of World War I, British Methodist missionary Rose Sayer (Katharine Hepburn) finds the church she runs with her brother Samuel (Robert Morley) behind enemy lines in German East Africa. German troops brutishly burn the village and take away all the men, and Samuel dies soon after.

She's rescued by Canadian expatriate Charlie Allnut (Bogart), skipper of The African Queen, a small transport boat used by a local mining company. Rose comes up with an interesting plan, to use the varied material onboard to fashion homemade torpedoes with which to sink a German warship, the Louisa, patrolling downriver. Charlie is steadfastly against the idea because navigating the river is next to impossible and fraught with other perils besides, including a German fort en route and treacherous rapids thereafter. Rose, however, will not be deterred.

Though an exciting, realistically suspenseful adventure story, The African Queen is mainly concerned with the relationship between these two wildly disparate characters: the refined, religious teetotaler Rose and the uneducated, indelicate and hard-drinking Charlie. At the start of the film they couldn't be more different, and yet their initially polite but awkward and class-conscious business relationship before war gives way first to bitterly conflicting attitudes and finally unexpected romance. She sobers him up, revealing abilities he didn't know he had while he intoxicates her with life on the river and a world she has never known.

As the documentary points out, the film was a shrewd move by its outspoken director, John Huston, and its liberal-leaning stars, all of whom were on the cusp of damaging their careers near the start of the Blacklist but which this once-removed flag-waver reinvigorated.

The performances are simply marvelous. Bogart is authentically world-weary, irritable and - unusual for Bogie - vulnerable, while Hepburn's innate poise and dignity are tested both physically and in terms of her character: there's a pivotal scene about halfway through the film where she literally transforms into a different person before the camera. It's something to see. 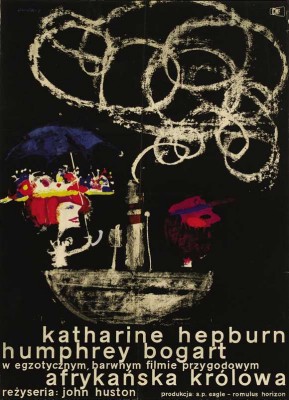 The film has excellent three-strip Technicolor photography by Jack Cardiff (with Ted Moore as the camera operator) which shows off the African locations to great advantage, but the real pleasure in this high-definition release are Bogart and Hepburn's expressive faces. The 1080p transfer simply reads so much more in the eyes and in the lines of their features, Bogart's deeply-etched wrinkles especially. It was hard not to keep freezing the image to study them: Hepburn's freckles (and wispy facial hair!) and Bogie's bloodshot eyes and nicotine-stained teeth. The restoration team has done a remarkable job minimizing the many process shots, which have never looked better. (The many miniatures and studio exteriors also are well integrated; the trickery isn't magnified in high-def as one might suspect.)

My single complaint is the opening titles, which match the original film's font but appear video-supered rather than like 35mm film. The complete Super-8 sound print that as a teenager I used to borrow from the Henry Ford Centennial Library in Dearborn Michigan bore a "Distributed by United Artists" title, but this release notes, "Distributed by Madison Reports and Releasing Corp.," a company I've never heard of.

Paramount was also wise to follow Warner Home Video's example and retain the original mono mix, which is supported by English, French, Spanish, and Portuguese subtitles, along with audio in French and Spanish.

The aforementioned Embracing Chaos (see comments above), in 1080p high-definition, wisely mixes informed cinema scholars and biographers like Eric Lax, Laurence Grobel, William J. Mann, and Natasha Fraser-Cavassoni with usual suspects like Rudy Behlmer and Richard "I Hate My Job Almost As Much as I Hate You" Schickel. Theodore Bikel (who has a small role as a German officer) and assistant director Guy Hamilton are on-hand ("Bullshit!" says the latter when asked about the infamous "long pig" incident*), while ageless Norman Lloyd, Mark Rydell, and Warren Stevens make interesting remarks from the sidelines. There's also good use of home movies and archival interviews Huston, Cardiff, Hepburn and, briefly, Bogart and wife Lauren Bacall. The making of The African Queen is a good story worth telling to begin with, but this tells it well.

Need I say it? This is a must for any and all serious film fans. A DVD Talk Collector Series title.

* According to Huston and others, the company was served delicious meals until their African cook was arrested following the disappearance of several natives....