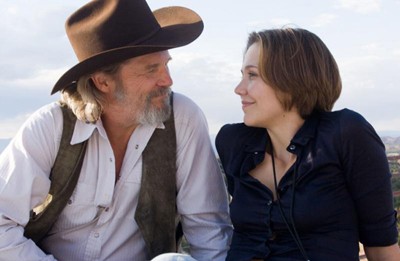 Grizzled old country singer Bad Blake (Jeff Bridges) is enough trouble that he comes with a warning label. He's bad in all the expected ways. He's a drinker, a smoker, a womanizer, and he's on the other side of a one-time successful career. At the start of the film, he's on a tour playing small-town dives, including a bowling alley in Pueblo and a piano bar in Santa Fe. It's at the second place that he meets Jean (Maggie Gyllenhaal), a reporter for the local paper. Bad accepts a sit-down interview with her because she's the niece of the guy playing keys for him that night, and something about her interrogation--or more specifically, about Jean--gets under his skin. Pretty soon, she's all he can think about.

Stories of old cowboys in need of redemption are nothing new, but the new movie Crazy Heart proves that just like a pair of worn-down dirtkickers that fit so comfortably, the genre isn't entirely worn out. Written and directed by character actor Scott Cooper and based on a novel by Thomas Cobb, Crazy Heart weaves a familiar tale about back roads, music hall dives, heavy drinking, and weary romance.

Bad Blake may be an alcoholic, but he's a professional who never misses a show and a bit of a cult legend. He may look like a mess offstage, but put a guitar in his hands and an audience in front of him, and Bad comes alive. Maybe it's because he shines this way that Jean is drawn to him, maybe it's just another notch in her cycle of being attracted to screw-ups, but she relents to his advances. Bad then gets one of the biggest gigs of his career, opening for his former apprentice. Tommy Sweet (played by a surprising Colin Farrell) was part of Bad's backing band, now he's a huge star. Not one to forget where he came from, even if Bad does count him out, Tommy hires him for the show and puts a lucrative deal in front of him. Bad now has a woman and career prospects, and the songs are flowing again. He just has a few mistakes to make before he can take full advantage.

Crazy Heart is really an actor's movie. The conventional story, fine as it is, lives or dies based on who are in the lead roles. For Bad, you couldn't ask for a better actor than Jeff Bridges. He plays the aging star with a remarkable sympathy, never allowing him to be the buffoon even when he's screwing up. Bridges is also extremely comfortable with the music, having recorded an album here and there during his own career. The tunes are written and produced by T. Bone Burnett (O Brother Where Art Thou?), actor Ryan Bingham (the singer in the band in the bowling alley), and the late Stephen Bruton, a former member of Kris Kristofferson's crew and a songwriter whose material has been recorded by Willie Nelson, Waylon Jennings, and others. The pedigree is there, and the collaborators deliver plaintive country songs without overdoing it. They are authentic because they are simple, never hitting any story connections too hard on the nose. Bridges sings them like he's been living with them all his life, and unexpectedly, Colin Farrell does a nice job with his performances, as well.

As the movie tells us, though, Bad Blake would be nothing without his women, and Jeff Bridges would not be quite as fascinating without Maggie Gyllenhaal. As he oh so slickly tells her in his early flirtations, it took a beauty such as hers to show him what kind of a dump he was staying in. In much the same way, Gyllenhaal's steady performance spotlights how unsteady Bad Blake really is. She's an extremely empathetic actress, and her reactions to what Bridges does are carefully attuned to the emotional tenor of the scene, creating more space for him to do it in. It's a marvelous skill for an actor to have, she is drawing attention to herself by diverting it to her co-star.

As things progress, savvy audiences will easily see some of the territory up ahead. Thankfully, Scott Cooper doesn't linger too long on some of the more standard components of Bad's redemption. His is such an easygoing cinematic style, he manages to shuffle us through the necessary mechanics of the narrative without us really knowing they are there. The third act also has one of the movie's most pleasing sidebars, the old fogey friendship between Bad and his local barkeep, played with understated humor by Robert Duvall. Crazy Heart has its own southern drawl. Nice and easy does it.

The one surprise for me is how Cooper wraps the whole thing up. Without revealing too much, the director ignores Bad Blake's philosophy that you always give the audience what it wants, and instead he lets Crazy Heart go to places that are far more emotionally satisfying and make way more sense in the long run. They certainly fit more with the lessons Jean has taught the singer, and which Bad has in turn put into the song he wrote for her. "Pick up your crazy heart and give it one more try...." 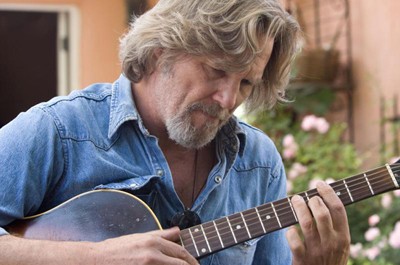