The Fullmetal Alchemist franchise began as a manga series written and drawn by Hiromu Arakawa in 2001 that finally ended its run in June 2010. In 2003, the highly successful anime version debuted and aired for 51 episodes in Japan and on the Cartoon Network in the United States. The original anime series diverged from the manga in many areas leading to much debate amongst fans about which version was better. These debates will undoubtedly carry on with the release of Fullmetal Alchemist: Brotherhood. This new series is a complete reboot of the anime series that aims to follow the manga much more closely than the original series did.

At the time of this review, the episodes are still being developed and aired in Japan with the total episode count numbering in the 60's. Fullmetal Alchemist: Brotherhood Part 1 collects the first 13 episodes of the series, which takes place in an alternate early 20th century. Here, alchemy is a science and practiced by state certified alchemists. Alchemy is a based on the Law of Equivalent Exchange: in order to create something, you must give something of equal value. You cannot create something out of nothing. 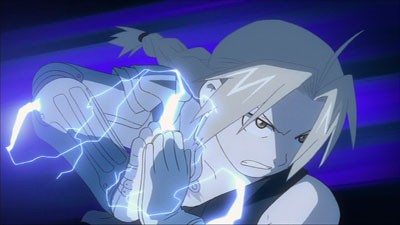 The story focuses on the two prodigal alchemist brothers, Edward and Alphonse Elric. The Elric brothers are co-dependent characters; they truly need each other and lean on one another to get through the tragic events of their lives. In their youth, their father abandoned them and, more recently, their mother died. A family friend, who they refer to as Granny, takes in the two boys. The Elric brothers make it their mission to bring their mom back from the dead and train in the science of alchemy. After much training and research, they make a disastrous attempt at resurrecting their mother, which results in a ghastly abomination. Aside from not working, the transmutation brings about some unintended consequences caused by the Law of Equivalent Exchange: Ed loses his leg and Al loses his entire body. To save Al, Ed has to give up an arm to bind Al's soul to a suit of armor. Winry, the girl who lives with Granny, builds Ed an automail arm and leg--think prosthetic only more advanced and made of metal. When Ed's talent as an alchemist is later discovered by the military, he is given the option of joining as a State Alchemist--a position that would give Ed access to restricted research that he may be able to use to get Al's body back. Ultimately, Ed and Al seek out the Philosopher's Stone, which amplifies an alchemist's ability by allowing them to avoid the Law of Equivalent Exchange. 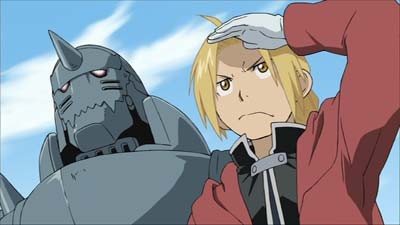 These 13 episodes merely scratch the surface of Ed and Al's journey to find the Philosopher's Stone. We are introduced to a group of homunculi, superhumans with mysterious origins who are named after deadly sins. The leader of this group appears to be a woman homunculus named Lust, who reports to some mysterious "Father" and is in the middle of executing some grand scheme that has yet to be revealed. A conspiracy within the ranks of the State Alchemists is also afoot. Colonel Mustang, who is highly ambitious and seeks to become Führer of Amestris, suspects that there are traitors in their midst. As the Colonel attempts to weed out the traitors, a select few are chosen to be in his trusted inner circle, with the Elric brothers being among those few. These subplots develop while Ed and Al focus their efforts on learning more about the Philosopher's Stone; this show is shaping up to be a fantastic multilayered adventure. 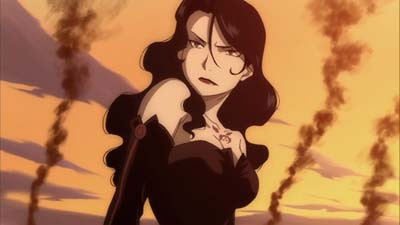 For newcomers to Fullmetal Alchemist, the opening episode can be confusing and feel a bit daunting. If I was not reviewing this whole set, that first episode ran the real risk of completely turning me away from watching any more. The episode jumps right into the thick of things--a lot of characters make an appearance and many of them have incredible powers that are left mostly unexplained. It's an exercise in frustration trying to make out what exactly is occurring on the screen or why I should even care. Fear not, fellow Fullmetal newbies, the subsequent episodes not only answer some of the questions brewing in your mind, but begin a series that promises to be one of the most impressive anime releases in some time. Outside of the first episode, all the episodes in this set are vital to the story and contain little, if any, filler material.

Fullmetal Alchemist fearlessly attacks topics such as science vs. religion with our heroes, Al and especially Ed, falling firmly on the side of science. Many of the episodes take on a decidedly anti-religion undertone with villains such as Father Cornello who deceives his followers with second rate alchemy he claims to be miracles of the Sun God. Another character is a surviving Ishvalan--a civilization of people that firmly believe their god is the "one true god." This particular character hunts alchemists that work for the state and slays them for turning their backs on god. The series does not, however, take a stand firmly against religion as it poses the idea that perhaps this character is justified in seeking revenge. 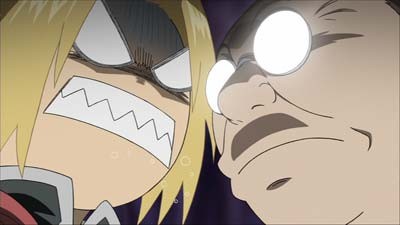 Fullmetal Alchemist: Brotherhood could easily take itself too seriously and maintain a dark, brooding atmosphere throughout; it would probably still be very successful. Refreshingly, there are smatterings of comedy and slapstick here and there to take the edge off the story. The comedy scenes are usually perfectly timed and placed in the episode and bring a laugh. These scenes remind you that while you are on an incredible journey with this story, it's ok to be a little silly, have a laugh, and still be awesome. It's very reminiscent of the comedy bits included in the classic samurai anime, Rurouni Kenshin, whose subsequent OVA's went all serious and dark; while still good, much of the Kenshin series' charm was lost as a result. The ongoing joke about Edward being tiny and people mistaking Alphonse for being the actual Fullmetal Alchemist is funny, but runs the risk of wearing thin.

Audio: Two tracks are included in this set: an immersive 5.1 Dolby Digital English dub and a Japanese language 2.0 track. The audio quality of the English track is superb. This is a show with a ton of action and your surround speakers will get used quite a bit with this release. The English voice cast does a great job with these characters. Vic Mignogna's voice acting as Edward was an acquired taste, but any dislike I had for the voice disappeared early in the series. All the rest of the characters are cast well. The opening credits include a great opening theme song that stands among my favorites.

Video: The video is presented in 1.78:1 anamorphic widescreen. This anime series does not sport the most detailed image, but it still looks great with no hint of artifacting. This is not the most colorful anime series out there, but what is there is vibrant and clean. There is some CGI used to animate things like ceiling fans and other background objects, but it mixes almost seamlessly with the rest of the art.

For the most part, the relatively simple art style looks good and the animation is beautifully done. However, a personal peeve is the use of a color other than black to outline cartoon characters. It always looks awkward. This coloring scheme is only used for a few characters, most notably for Ed's blonde hair, which is outlined in a slightly darker yellow. This coloring style, however, is not used for other characters, such as Winry who has blonde hair with black outlines. This may be nitpicking, but the inconsistency in the coloring distracted me from the show more than a few times as I wondered what's up with Ed's hair?

Extras: There are voice actor commentaries for both episodes 1 and 10. The commentary track for episode 1 is a little more subdued and focused with Mike McFarland, the ADR Director, serving as a mediator and interviewing the other voice actors throughout the track. The other voice actors involved in the first episode commentary are Colleen Clinkenbeard (Riza Hawkeye), Maxey Whitehead (Alphonse), and Travis Willingham (Roy Mustang). The Episode 10 commentary is all over the place. Voice actors, Caitlin Glass (Winry), Laura Bailey (Lust), and Sonny Straight (Maes Hughes), begin the commentary with a captivating reading of the ingredients listed on a can of Brain Tonic, a drink which apparently causes you to go off on nonsensical tangents. Voice actors are weird. So, it's no surprise that they deliver a wonderfully weird, but amusing commentary filled with crazy voices and bizarre observations.

Also included are textless opening and closing credits and trailers.

Final Thoughts: Fullmetal Alchemist: Brotherhood features a deep, multilayered story that promises to be great. The characters are rich and memorable. This series takes its time fleshing out the characters and their origins. The story has all the makings of that rare, amazing journey that you will never want to end. Newcomers to Fullmetal Alchemist, have no fear! This series is not a sequel to the original, but a complete retelling that follows the manga more closely than the original anime release. Stick with this series through the first episode, the story really picks up after that and is well worth your anime dollar. Highly Recommended. 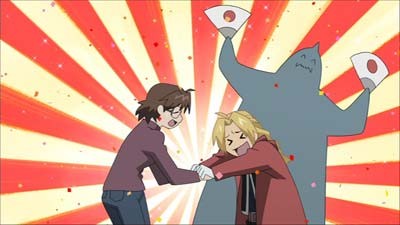