Vivendi Entertainment // Unrated // April 6, 2010
List Price: $14.93 [Buy now and save at Amazon]
Review by Justin Felix | posted April 9, 2010 | E-mail the Author
The Taglines:
THE PRAIRIE HIDES A DEADLY SECRET
No one invited them. NOTHING CAN STOP THEM. 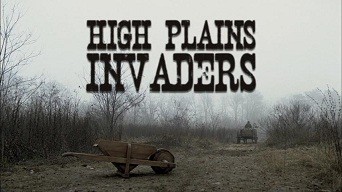 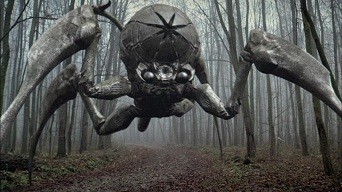 For a couple years now, RHI Entertainment and Genius Entertainment have been releasing creature features that aired on the SyFy Channel (usually during their Saturday offerings of cheap science fiction and horror movies) on home video under the banner Maneater Series. The Maneater Series has become rather reliable in offering diverting, if completely forgettable, cheap creature films. There must be some kind of fan base for this series, as the line has flourished over this time. Its official website is located here.

In the past two months, I've been sent the previous installments of the Maneater Series to review: Carny and Hellhounds. It appeared at the time those two films were released that the website had not been updated for several months (and it still hasn't been as I write this). Some changes appeared to be afoot on the business level as Vivendi Entertainment's logo - and not Genius Entertainment - was now featured on the cover art. The same holds true for this month's Maneater release: High Plains Invaders. If there are any Maneater Series fans out there, it's difficult to say what the future of this long-running home video series will be, as no new titles are in the immediate pipeline. However, I can say that Vivendi Entertainment at least intends to release a triple feature collection under the Maneater logo in May, though this merely collects the three previously available aquatic flicks Croc, Sea Beast, and Shark Swarm.

In any case, if High Plains Invaders proves to be the final Maneater Series title, then the series ends on a relative high point. Just like other entries, it's formulaic and sports an unconvincing CG menace. I wouldn't call it high art under any circumstance. However, this movie's got some grit to it. Like the aforementioned Hellhounds, High Plains Invaders is set in a historical period, the Wild West in this case, and like Dean Koontz's The Bad Place, it effortlessly mingles a number of genres together, in this instance the Western, horror, fantasy, and science fiction.

The protagonist of High Plains Invaders is Sam (played by character actor James Marsters), a train robber about to be hung for his crimes in a small Nevada mining town in 1892. His execution is thwarted deus ex machina - style by the appearance of giant insect-like creatures who proceed to bloodily kill townsfolk left and right, and inexplicably burrow giant craters into the earth. Sam heroically tries to stop this menace with the help of a veritable rogues' gallery of Western stereotype characters. Yes, you get a miner, a storekeeper, a sheriff, and a widow, as well as a Dr. Quinn, Medicine Woman-type named Abigail (Cindy Sampson), who principally serves as Sam's love interest. Additional characters include a mineralogist named Jules (who has read Jules Verne - get the connection? - and can thus speculate and articulate what's going on to the others) and a thoroughly obnoxious woman bounty hunter named Rose, clearly contrived to reflect modern gender sensibilities about empowerment in films.

If you've seen any other Maneater title or one of the countless similar creature features broadcast on the cable network SyFy, then you know the drill. The insect creatures periodically show up and pick off supporting characters while the survivors try to figure out how to stop them. Outside of its genre-hopping and setting, High Plains Invaders doesn't stray too much from this formula. However, at a breezy 87 minutes, Richard Beattie's script directed by K.T. Donaldson is never boring - and the requisite Saturday matinee ambience is always present. I can't say that I wasn't entertained by the goings-on here. It's a shame about the Rose character, as she grates throughout, and Beattie even induces groans with her final quip of the film.

Ultimately, with its lack of extras, High Plains Invaders is best viewed as a rental, or happened upon on a cable station. 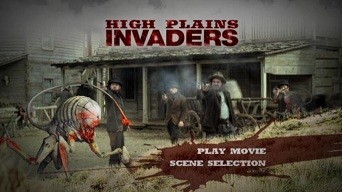 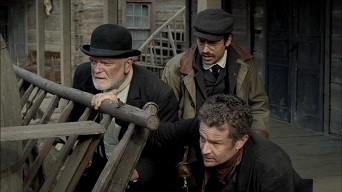 Vivendi Entertainment gives High Plains Invaders an anamorphic widescreen presentation that it claims "preserve[s] the aspect ratio of its original television exhibition." As is fairly standard for the Maneater Series, the image is serviceable if underwhelming, with good colors and fair details.

The lone audio track is an English language Dolby Digital 5.1 affair. Again, the track is serviceable, with dialogue always clear. However, the mix isn't particularly dynamic.

Trailers for Phantom Racer and Carny precede the main menu. And that's it for extras; the only options in the menu are Play Movie and Scene Selection.

High Plains Invaders is a fun, albeit clichéd, genre-hopping entry in the Maneater Series - and apparently also the last, at least for the time being. Given its lack of extras (and the gratingly obnoxious Rose character), it's best viewed as a rental or on cable.