While Sandra Bullock does take an understandable, nay justifiable, amount of grief for taking some of the film roles she does, she does put in the time and effort to all her projects, whether they're the razzie-winning All About Steve or The Blind Side. But in her acceptance speech for Best Actress, the humorous deflection she uttered about "wearing (the voters) down" may be a little true because, at least in this story, there wasn't much to do that could impact its power either way. And as you see in the film, getting out of the way of the story isn't a bad thing.

John Lee Hancock (The Alamo) not only adapted Michael Lewis' book for the screen, but directed the film as well. It tells the true story of Michael Oher (Quinton Aaron, Be Kind Rewind), a physically imposing young man on the verge of being virtually discarded from society. He was born to a drug-addicted mother, one of twelve children, who had gone to almost a dozen schools by the time he reached high school. He was taken from his home years ago by the state, and had suffered through periods of being homeless before getting the chance to attend a Christian school. 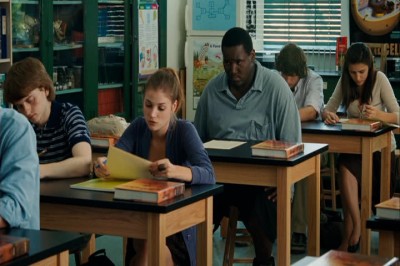 This is where Leigh Anne Tuohy (Bullock) and her entrepreneur husband Sean (Tim McGraw, The Kingdom) come into play. They see Oher, or "Big Mike" as he's called at school, walking on the sidewalk on a dark, cold, rainy November night. Leigh Anne decides to take him in and let him stay for the night. Soon after, Leigh Anne's feelings of simple compassion and willingness to lend a hand take over, and she helps Oher discover what his true talents are. Namely, he becomes a football player, a huge left tackle who is designed to protect the quarterback when he throws the ball, hence the film's title. The film also points out in the opening moments that left tackles in pro football make substantial money in doing this. Or to paraphrase Leigh Anne's words in an opening voiceover, if the quarterback is a football team's mortgage, the left tackle is its insurance. Oher may be without his birth mother and virtually all of his siblings, but he is instinctively protective of those he cares about, so that instinct is given chance to flourish, which as it turns out is beyond what anyone expected.

One of the first things that strikes you, aside from the story in the film, is how truly gentle Aaron is. Oher bottles up his trauma and hurt and walks around with it inside him. But he doesn't lash out in fits of anger or rage like a film would normally have him do. Maybe it's because nobody would listen, or maybe it's because nobody would understand, but when given a chance to acclimate to his surroundings, he gets a chance to show everyone what his potential is. Oher's grade point average when Leigh Anne takes him in is 0.6; he's an academic afterthought and foregone conclusion. Given enough time and faith, his self-confidence and ability shines through. Under the tutelage of a Tuohy friend (played by Kathy Bates), Oher not only gets the grades to receive a full athletic scholarship, but lands on the Dean's List when he attends the University of Mississippi (Ole Miss). 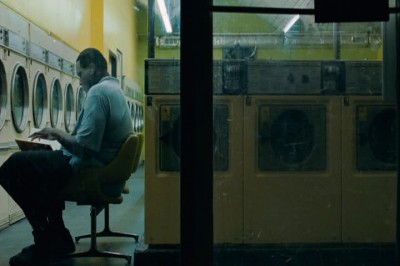 As Leigh Anne, Bullock would appear to be a solid portrayal of her real-life inspiration: strong, attractive, and above all else, a kind person. She takes Michael in, not based on guilt or self-validation. She does it because it's the right thing to do. It's a bold act, one that many of us probably wouldn't do under the circumstances. Her family is a strong one; with McGraw playing Sean as the calm confident husband who is aware of his role in the marriage and family. Their two children appear to be byproducts of this strength and confidence, particularly the youngest, Sean Jr. or SJ (Jae Hed). It is a warm, loving family, something that Michael hasn't seen in his life.

With such a great story, does Bullock get out of the way of its telling? Sure, in fact it'd be hard to really get in the way of such a compelling and heartwarming story. It's a chore not to get swept up in Oher's story. But when we're talking about best actress performances, shouldn't we be looking at exemplary performances, rather than ones that are "mistake-free"? Take your occupation, whatever it may be. Do you get praise for doing it, or do you get praise for doing it well, better than anyone else can? The comparison to something as subjective as acting may not be entirely valid, but when you look at some of the other performances that Bullock was up against, or even against her own, I think you can differentiate between "mistake-free" and "perfect," and I think her role in The Blind Side is the former. I'm not slagging it or anything, but in a film where a story like this is so emotional and fascinating, just what is it that made Bullock so exceptional in it? 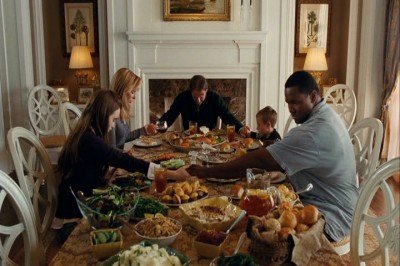 While that may border on heresy to Bullock's ardent fans, it should not be viewed as a flaw in this film. In fact, the story stands out from the performance, as it weaves a tale of compassion, love and understanding, even under the most adverse a circumstance. That's the thing that should be celebrated in The Blind Side, above all else.


Presented in 1.85:1 widescreen, Warner uses the VC-1 codec from The Blind Side adequately and without concern. Flesh tones are reproduced accurately, and background image detail looks solid. Image detail in the foreground is fine, and the source material looks in pristine shape, with its blacks appearing solid and without crushing to speak of. There isn't a discernible level of detail that sets the film far and away its contemporaries; The Blind Side looks good.


The DTS-HD Master Audio 5.1 lossless surround option is the only English-speaking option on the title, and in the case of The Blind Side, I'm not entirely sure why. Sure, the football scenes pack a little low-end punch and there's some occasional directional activity in the rears, but the action is straightforward and without any sonic exercise. Dialogue is firm in the center channel and doesn't require any user adjustment, and the soundtrack free of distortion or mosquito issues. It works, son.


The extras here aren't bad, but one's left feeling far more could have been included. "The Real Michael Oher" (10:02) includes interview footage with Oher as he discusses his life within the timeline the film shows, his relationship with Leigh Anne and how he got to football and to Ole Miss. He also adds a dimension to the work he put in leading up to the NFL draft as well. It's a nice accompanying piece. "Acting Coaches" (4:52) shows how Nick Saban, Lou Holtz and other college football coaches came into the role and what they did for it, and Hancock discusses their time on set. "The Story of Big Quinton" (13:40) shows how Aaron got the part, and where he was at the time of casting. It's an admittedly moving story, with Aaron working security and even offering aid to Hancock in case he didn't get the role, and his preparation for the role after he landed it. He truly appears as nice and easygoing as the man he's portraying on screen, and it's worth checking out. 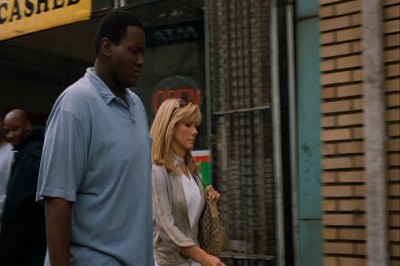 Some conversations between the film and book/real life people, entitled "Sideline Conversations," are next. The first is with Bullock and Leigh Anne, as they recall their first impressions of one another and Bullock's casting for it, but at 5:11, goes by quickly. Lewis and Hancock's conversation is much more detailed (27:34), as Lewis recalls his origins for writing the book and his friendship with the Tuohys, and Hancock recalls some of the storytelling choices he made in the film. They even talk about the role of strong women within Oher's story. Good stuff to be had here. Four deleted scenes (7:07) are next, but are redundant to the story. Wrapping up, Warner has included the BD/DVD/Digital Copy combo all on two discs for your dining and dancing pleasure (the standard definition disc was the source of these screengrabs).


The Blind Side is a movie with good, though not specifically great, acting performances. What it doesn't have there, it makes up for in the heartwarming story of Michael Oher, who, coming off his rookie season with the Baltimore Ravens, appears to be the real thing, after spending many years being dismissed as one with little value. Technically it's a solid Blu-ray title and from a supplementary perspective, the extras are good but a commentary could make this a keeper. As it stands, it's definitely worth viewing, with an eye towards purchase for Bullock die-hards. 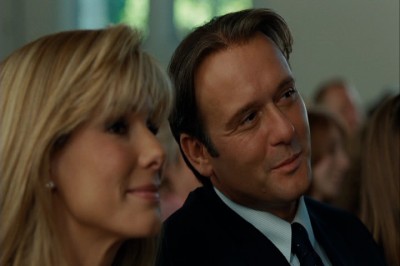