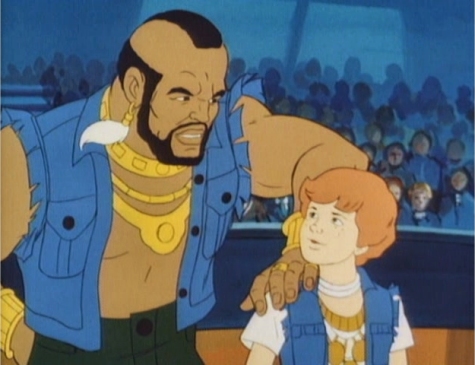 For those in their mid-20s and beyond, the mention of "Saturday morning" should spark a cartoon-induced nostalgia fueled by sugar cereal and colorful commercial breaks. That's not to say that weekday afternoon 'toons weren't enjoyable in their own right, but the concept of marathon viewing---on a non-school day, no less---was a new and welcome experience for us spoiled brats. In most areas (at least by the time the 1980s rolled around), cartoons ran from 6:00 until noon on major networks---and more often than not, most kids spent at least half of the AM starting at animated adventures and 30-second spots. No wonder our attention spans aren't what they used to be. Warner Bros. continues to celebrate this long-running American ritual with decade-specific collections of Saturday morning cartoons---and with the 1960s and 70s already spoken for, it's time for the 1980s to get some time in the spotlight.

Of course, legal issues prevent a truly well-rounded collection of cartoons from ever seeing the light of day. Case in point: Saturday Morning Cartoons is comprised of Hanna-Barbara properties...and unless you're a walking encyclopedia of cartoon knowledge, you probably won't recognize a few names on the guest list. Sure, most folks remember Thundarr the Barbarian (below left), Kwicky Koala (bottom right) and The Flintstone Kids, but Goldie Gold and Action Jack? Galtar and the Golden Lance? Maybe I was riding my bike. A handful of more well-known efforts like A Pup Named Scooby-Doo, The Shirt Tales, Pac-Man, The Snorks, and Richie Rich are nowhere to be found---but if Warner Bros. follows their release schedule for the previous collections, we should expect Volume 2 in mid-October.

But let's not get ahead of ourselves here. As with past installments of Saturday Morning Cartoons, Warner Bros. has done a decent job of preserving the nostalgia and spirit of the weekend experience. What's more is that even if you're new to one of these shows, they can still be enjoyed on a basic level....whether you're actively following the story, or just laughing at the over-the-top cheesiness of it all. Most of these series employ very distinct formulas of good vs. evil, whether it's the Smurf-like adventures of The Biskitts (bottom left) or crime-busting comedies like The Mr. T Show (top) and Chuck Norris: Karate Kommandos (below right). For the most part, these adventures are 100% accessible, especially since they're early episodes from the respective debut seasons. From top to bottom, here's what Saturday Morning Cartoons: The 1980s Collection, Volume 1 includes: 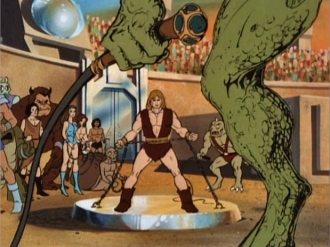 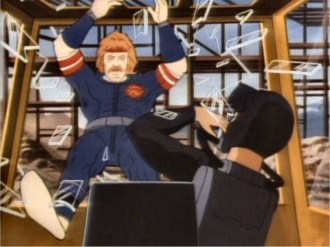 On paper, both discs are surprisingly well-balanced with easy favorites and a few also-rans. The previously-mentioned Goldie Gold and Action Jack is an odd choice to kick off this collection, but the mixture of globe-trotting adventure, excessive wealth and campy comedy proves to be a satisfying (and recurring) formula here. Internet regulars will undoubtedly appreciate Chuck Norris: Karate Kommandos, a tough-talkin' series bookended by live-action words from the man himself. Like The Mr. T Show, Kommandos pairs a popular tough guy with a group of goofy kids on Scooby-Doo-like capers, often peppering the adventures with heavy-handed life lessons. The madcap Ed Grimley was never a personal favorite, but it's hard to hate the series' off-the-wall approach...and, of course, the voice work by Martin Short himself. The Flintstone Kids gets by on name value alone, and it's given the lion's share of coverage on Disc 1. Roughly 45 minutes of content is included during these four segments, which include regular favorites like Captain Caveman & Son and Dino's Dilemmas. The Mr. T Show is another corny but captivating standout...and keep an ear out for Phil LaMarr in his first voice acting role as the dorky but well-meaning "new kid", Woody.

Disc 2 keeps the momentum going fairly well, leading things off with another obscure opener, The Biskitts. It's a cute and charming show which undoubtedly appealed to both genders---and though it certainly resembles The Smurfs in more ways than one, most kids probably didn't mind (or even notice) the similarities. The Monchhichis is another like-minded Smurfs close that most 80s fanatics should remember, and it's even more sugar-coated than a case of Super Golden Crisp. Galtar and the Golden Lance, Dragon's Lair and Thundarr the Barbarian are smartly grouped together on the list, showcasing the popular fantasy-based adventures that dominated the early 1980s cartoon landscape. Only Dragon's Lair plays it mostly for laughs, but the sword-and-sorcery format proved to be a winning combination. Closing things out is The Kwicky Koala Show, another variety-based series and the last creation of animation legend Tex Avery. Nearly all of the segments should appeal to Droopy fans of all ages, especially Crazy Claws and the Bungle Brothers wraparound shorts...not to mention the title character himself, of course. 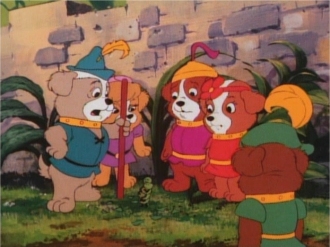 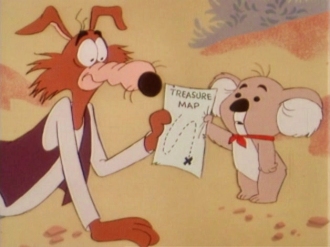 A word about the presentation format: on both discs, a disclaimer tells us that portions of these episodes were found in less-than-pristine condition and pieced together to simulate the original viewing experience. This would only apply to multi-part shows like The Flintstone Kids, Kwicky Koala and The Biskitts---and in layman's terms, it means that certain segments were taken from different episodes. Of these three, the only "victims" are The Flintstone Kids (three segments are from episode #2, one is from episode #3) and Kwicky Koala (segments are taken from episodes #1 and #2)...and it's perfectly acceptable, given the circumstances. One problem with this presentation, though, is that a separate "Play All" feature wasn't included for each episode. Why go to all the trouble of recreating the format and forget something this simple?

Minor quibbles aside, Saturday Morning Cartoons: The 1980s Collection, Volume 1 is a worthy follow-up to past installments---and it goes without saying, but those who grew up during this decade will want to give it a spin. Though the technical presentation is hit-or-miss and bonus features are slim, there's plenty to like on this low-priced collection. Let's take a closer look, shall we?

Presented in their original 1.33:1 format, it's no surprise that these episodes look a little worn around the edges. Dirt, debris, softness and moderate amounts of interlacing can all be spotted along the way, although The Flintstone Kids doesn't seem to suffer from these problems at all. The garish color palettes obviously look a bit faded, even though the colors themselves appear accurate. Though most of these problems are undoubtedly source material issues, it's a shame that some of these couldn't be cleaned up a bit more. As such, the visual rating may look a little low on paper, but this isn't a bad effort by any means. After all, how many short-lived animated series from the 1980s have been lucky enough to reach DVD at all?

The audio presentation is slightly more satisfying, as these 11 shows are presented in Dolby Digital mono with optional Portuguese and French dubs. Dialogue and musical numbers come through relatively clean and clear, even though most of these mixes are obviously a bit on the thin side. It's unknown whether Kwicky Koala has been sourced from the same PAL masters that Cartoon Network and Boomerang use, but the theme song sounds fine to these ears. Optional English, French and Spanish subtitles have been included during each and every episode, which is certainly a nice touch. 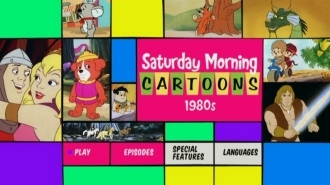 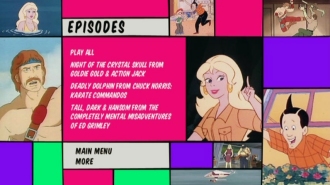 Seen above, the colorful menu designs offer simple, problem-free navigation. Each episode (and, in some cases, each segment) is presented with two or more chapter stops, while no obvious layer changes were detected during playback. Skippable trailers and warning screens precede the main menus. This two-disc set is housed in a hinged keepcase, which fits inside a matching slipcover. Unfortunately, no complete episode listing is printed on the packaging, so follow the one above if needed.

Bonus Features
Not much here, but at least there's been a little effort. Disc 1's lone extra is "Lords of Light!" (18:22), a short featurette that focuses on Thundarr the Barbarian. It doesn't dig especially deep, mostly hinting at the show's inception, general production and its impact on future cartoons. Still, I doubt that most fans were expecting a franchise-specific feature, so this is certainly a welcome inclusion. Over on Disc 2, the sole bonus feature (if you can call it that) is a Trailer for previous installments of Saturday Morning Cartoons (1:01). Unfortunately, no subtitles or Closed Captions are included during these extras.

Children of the 1980s certainly love their nostalgia fixes---and for the most part, Warner Bros.' Saturday Morning Cartoons: The 1980s Collection, Volume 1 delivers the goods. Featuring 11 well-known (and not-so-well-known) cartoons from the decade of excess, these animated adventures feature colorful characters, silly stories and more cheese than Wisconsin and the moon combined. While the technical presentation isn't perfect and bonus features are kept to a minimum, this is a satisfying two-disc collection that twenty and thirty-somethings should enjoy. Break out the Cap'n Crunch and dig in! Firmly Recommended.