Shout Factory // Unrated // May 18, 2010
List Price: $19.93 [Buy now and save at Amazon]
Review by Stuart Galbraith IV | posted May 8, 2010 | E-mail the Author
Shout! Factory's plans to release all eight classic Gamera movies in their original widescreen, Japanese-language versions is great news for American kaiju eiga ("giant monster movie") fans. Movies starring the fire-breathing, prehistoric and extra-terrestrial monster turtle have been kicking around in myriad theatrical, television, and home video versions through the years, though few of these have been satisfying or show the films to best advantage. This DVD release is by far the best of the various American home video versions, featuring as it does a sparkling 16:9 enhanced transfer and good extra features.

The story of Gamera - The Giant Monster (Daikaiju Gamera, 1965) is particularly convoluted. As was done with the original Gojira (1954), Gamera's first American distributors opted to retool Daikaiju Gamera, shooting new scenes featuring actors Brian Donlevy and Albert Dekker. That version, retitled Gammera the Invincible (1966), later turned up on television but by the 1980s had disappeared. In its place came a new "Sandy Frank" version, simply called Gamera; all the American scenes were dropped and in its place was nothing more than the original Japanese version (minus the opening titles) with new English dubbing. However, the English dubbing was appallingly bad, so much so that this version became the virtual flagship of Mystery Science Theater 3000, the movie-mocking comedy show. Indeed, the Sandy Frank versions seriously damaged the entire series' reputation, especially for those of us who enjoyed AIP-TV's carefully dubbed syndicated versions of Gamera sequels that aired throughout the 1970s.

Though Wikipedia ignores this completely, in the 1990s yet another version of Gamera and its sequels appeared. These fully licensed versions from Neptune Media were virtually one-man productions, produced (and mysteriously financed) by Ohio-based Bill Ferguson. Neptune released the original, Japanese-language and widescreen Gamera, retitled Giant Monster Gamera, along with the 1966 Gammera the Invincible, also for the first time in widescreen, around 1999. Unfortunately their timing was terrible; Neptune's super-deluxe VHS tapes came out just as retail stores were ridding themselves of prerecorded tapes in favor of DVDs. Bill's company did sublicense Giant Monster Gamera for laserdisc, but that format was also on its last legs. Around the same time, bottom-feeder DVD labels began flooding the market with the earlier American versions of several Gamera titles, movies that, they assumed, had fallen into the public domain.

Back in Japan, Tokuma Publishing and Toshiba released an expensive but superlative DVD boxed set of all the classic Gamera movies, in beautiful 16:9 widescreen transfers (that put rival Toho's Region 2 DVDs to shame) that also featured optional English subtitles.

Happily, Shout! Factory's release is about par with that exceptional release, and at a much lower price. 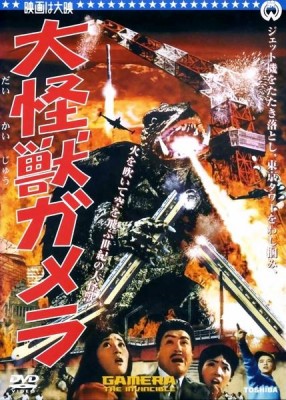 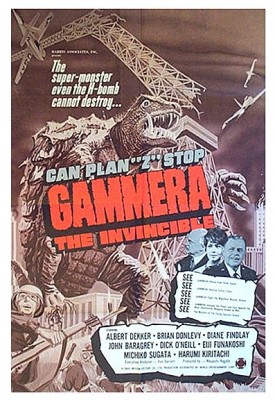 Though eventually the series would radically move off in a different direction - more about this later - initially Gamera - The Giant Monster was an obvious attempt by Daiei, one of Japan's leading film companies, to cash in on the general popularity of giant monster movies in Japan (and their marketability abroad), a genre up to then completely dominated by rival Toho, purveyors of Godzilla, Rodan, Mothra, et. al. Gamera - The Giant Monster is structured much like the first Godzilla. The Cold War heats up near the North Pole and when a Soviet MIG fighter is shot down, its nuclear payload spectacularly explodes, unleashing the frozen-in-time Gamera. As the monster makes the usual beeline to Tokyo, scientists and the military can find no way to stop the creature. A subplot introduces lonely, motherless Toshio (Yoshiro Uchida), whose torturous conflicts at home over a pet turtle lead to the boy's complete and dangerous obsession with the destructive monster.

The first Gamera movie isn't as enjoyable as those that followed, partly because it's less original, following Godzilla's well-trodden path of destruction so closely, and because the subplot with Toshio is more irritating than affecting. In its original Japanese version, it's clear the boy is basically pathetic and delusional, and the approach is uniquely Japanese in a manner that doesn't play well at all to American viewers.

But it did lay the foundation for the series' lasting impact. By 1965 Toho's monster movies were already in decline, shifting away from the mainstream appeal they once enjoyed toward an audience of primarily teenagers and, later still, children. Gamera director Noriaki Yuasa and screenwriter Niisan Takahashi wholeheartedly embraced this trend rather than fight it. By the third entry, children became the central characters and the movies were told from their innocent perspectives rather than neutral adult ones. Rarely do movies do this, even children's films about children - a few exceptions to this rule are The 5,000 Fingers of Dr. T, Invaders from Mars (both 1953) and The Railway Children (1971). Takahashi and Yuasa clearly empathized with these characters and, certainly in Mr. Yuasa's case, retained a childlike sense of wonder apparent in their work.*

Instead, the first Gamera movie is interesting in other ways. It was the only series entry in black and white, giving it a unique look that also helps hide some of its deficiencies in terms of the visual effects. But even these are often good and always inventive. Where Toho was by the mid-'60s scaling back on its effects, and where rivals like Toei, Nikkatsu, and Shochiku would cut corners and/or show limited imagination on its eventual kaiju eiga, Daiei's early Gamera films had an original look and the obvious effort is there onscreen.

Filmed in Daiei's CinemaScope-like Daieiscope process, Gamera - The Giant Monster is given a fine widescreen transfer at least as good as the superlative Tokuma/Toshiba DVD from Japan, and the English subtitles are fine. Some fans bemoan the absence of the original English version, Gammera the Invincible, some unfairly, loudly, and publicly blaming the UCLA Film & Television Archive, which holds the best-surviving film elements of that version. While it's unfortunate that it's not included, unlike the Raymond Burrified Godzilla, King of the Monsters! (1956), which carefully incorporated new footage into the middle of the action, the scenes with Donlevy, Dekker, and others is disconnected and poorly executed, always stopping the narrative in its tracks. The (mono) Japanese language version, in its original widescreen form, is without a doubt the best way to experience this Gamera.

The main attraction is a fact-filled audio commentary by August Ragone, author of Eiji Tsuburaya: Master of Monsters. A ubiquitous, proprietary presence on the Web, Ragone thankfully reined in his ego for this generally good track, which is impressively crammed with interesting information on the film's surprising origins and background and its cast and crew.

A full-color 10-page book includes an essay by Mr. Yuasa from 2001, character biographies, and other material. A publicity gallery is included, along with "A Retrospective Look at the Gamera Franchise," actually a full-frame featurette from the earlier Japanese DVD. Though statically shot, it includes behind the scenes photographs and interviews with Noriaki Yuasa, Niisan Takahashi, and others, who discuss the film's origins and production. Like the featurette, the Japanese trailer is English-subtitled.

Though more than a little silly, Gamera - The Giant Monster is a lot of fun and its 16:9 widescreen transfer provides American viewers the first real opportunity to see the film on big, widescreen TVs in all its city-smashing glory. Highly Recommended.

* I once had the pleasure of hosting a party for Mr. Yuasa and his wife at my home in Los Angeles. This childlike quality I describe was certainly on display that evening: Though in his late-60s, at one point he got so swept up in describing his direction of the actor in the Gamera costume that he dropped to the floor and began crawling around like turtle.