"Ghostwriter" was, without a doubt, one of the most unique children's programs ever produced. Debuting the early 90s on public television it tackled the tough task of getting kids excited about writing, while at the same time, keeping them entertained. It's most unique aspect was it's serial approach to storytelling. The educational shows I remember growing up were all weekly, self-contained episodes; of course you got to know characters better, but if you missed a week, it wasn't hard to catch up. "Ghostwriter" however, required a devoted following and ultimately, gained one, running for three seasons, running 74 episodes. A little over 15 years after the original series left the air, Shout has released the first season, spanning eight "cases" (4-5 episode story arcs). Like many programming from our youth, the big question is, "does the series hold up?"


On a personal level, "Ghostwriter" has always been a fond memory; my first exposure to the show was in school. Without warning, the teacher rolled in a TV one day and popped on a video of this new PBS show. The class was quickly drawn into the series featuring a spirit talking to a select group of kids through the written word, helping them solve the case of a gang of eerily masked kids who were stealing backpacks. I can't remember if we watched all five episodes of this first arc, titled "Ghost Story," but I remember being told what day and time new episodes would air. I followed the series for at least a year and a half, before, likely due to scheduling changes, I loot touch with the show. The episodes I did watched have stuck in my brain as having been enjoyable and captivating; I can safely say, "Ghostwriter" had a big effect on my own love for writing. 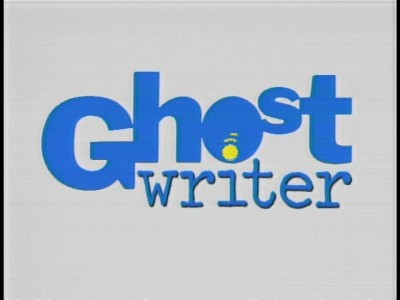 In all honesty, I can't think of a better way to describe the impact this series has had (and still can) on a young mind. Unlike programming aimed a younger audience, such as "Sesame Street" or "Mr. Rogers Neighborhood," "Ghostwriter" is rarely completely obvious in its intentions of inspiring writers. Even shows for the same age range of the time, were always straightforward in what they wanted you to learn. The show had a two-fold effect of imparting its message. Most obviously, the characters use writing to communicate with Ghostwriter and there are good lessons on sentence structure and clearly choosing your words to communicate. Additionally, there are writing and reading related interests shared by characters, that often play a major role in a story arc; these feel like they should eventually become heavy handed, but they never do, as the writers keep the train rolling and the mystery continually unfolds.


The mystery that comprises a story arc is perhaps the most subtly influential aspect of the show; whether kids realize it or not, each 4-5 episode arc shows them how to craft a narrative from beginning to end. There's a set-up, a mystery to solve, often a twist to keep the characters on their toes, and an eventual conclusion. Along the way, different characters are the focus of side plots and viewers get a more in-depth picture of whom they are. It's by no means amazing writing, but it serves its purpose and is entirely appropriate for the intended audience. As an adult rewatching the first season, the simplicity is greatly appreciated, after being encountering far too many series' aimed at an older audience that go out of their way to try and break convention, but fail to realize what a good story needs. 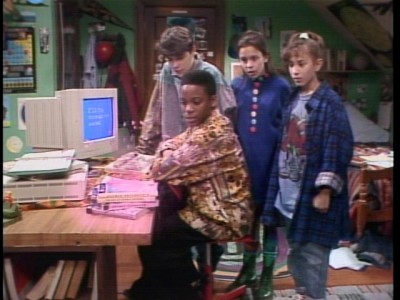 If you've never seen "Ghostwriter" before, you're in for a treat though. The show starts in a sprint and doesn't let up for the first, five-episode story arc. Viewers are introduced to Jamal Jenkins, a middle schooler with a love of science. He's the first to encounter Ghostwriter, who initially communicates with him through his computer. Jamal's friend, Lenni Frazer is quickly drawn into the mix, and soon she and Jamal decide to use Ghostwriter to help solve the case of the backpack thieves. Along the way, Alex Fernandez and his sister, Gabby are selected by Ghostwriter, and by the end of the arc, the new band of friends decide to form an official mystery solving team. The show introduces new characters over the course of the series, with two additions, Tina Nguyen and Rob Baker, showing up in the second and third arcs respectively. The kids are supported by a cast of supporting actors, comprising the adults in their life, including Samuel L. Jackson as Jamal's dad in a handful of episodes (he was later recast, but it's funny to see him in such a low key role).


The acting quality of the main cast is by and large, solid. Mayteana Morales as Gabby, can often come off as grating on the nerves, but as the little sister character to Alex, this can be seen as intentional. Sheldon Turnipseed is the strongest of all the kids, exuding confidence from minute one. The kids really do deserve credit for turning in enjoyable performances, especially when faced with many different social issues. Often, the mysteries try to bring in some important issue, or if they don't, the issue is relegated the side-plot, that focuses more on character development. These issues include pollution (a main character gets ill as a result), copyright infringement, a single parent family (and dealing with the loss of a loved one), and homelessness, just to name a few. The issues can sometimes be very clunky, especially the issue of copyright infringement, which ends up being used as a conclusion to mystery. 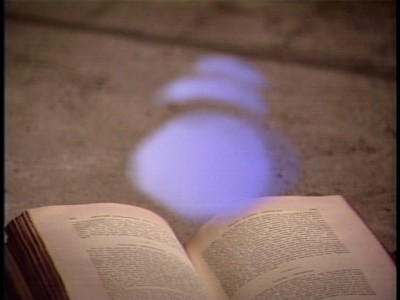 The show is by no means perfect, and takes a big hit in showing its age. Call me jaded, but the notion of middle schoolers running around the streets of New York, including the docks, solving mysteries, sometimes at night, is just absurd. The writers try to keep the kids grounded in the immediate neighborhood for the most part, but when the mystery stretches past these borders, suspension of disbelief really has to come on strong. Even worse though, are the musical numbers; Lenni's dad is a musician and every once in a while we are treated to a rather corny scene of him practicing some glorified elevator music with his band. If this wasn't bad enough though, in an early episode, Lenni decides to sit down at the Casio keyboard and plunk out a tremendously corny song about friendship. It's the type of song you might have come up with when you were young, but looking back, you'll fight the urge to fast-forward through the musical scenes.


At the end of the day, "Ghostwriter" is a childhood show that definitely holds up. Strong writing and much better than average performances deliver an educational program that entertains as much as it educates. It may be awfully dated in some places, but its themes and messages are vital. It's a show that stands out amongst many others for being daring enough to deliver strongly developed serial storytelling to a younger audience. It's a great starting point for any aspiring writer, and its contribution to education is forever appreciated.


The 1.33:1 original aspect ratio transfer is easily the worst aspect of this release. It's a slight step up from VHS with a low level of detail, light noise, some very rare source damage and color levels that leave much to be desired, appearing a tad faded. The show doesn't look good from a stylistic standpoint; the early 90s fashion leaves sets and wardrobe draped in often loud colors. There are no glaring technical errors such as compression artifacts or tracking errors, but don't expect much better than a picture quality that reminds you this was a lower budget public television production.


The English 2.0 audio track is generally clear with just a hint of tinniness. Strangely there is much more life to the opening and closing credits than anything in between. Dialogue is consistently balanced with effects and score, while distortion is never an issue.


The only extras are a trivia game on the fifth disc and a printed episode guide that has extra space for younger viewers to take notes about the case they are watching. It's a nice sentiment, but in reality, the space to write is laughably sparse. Any parents wanting to encourage their kids to write are best off getting them their own notebook.

While the technical quality of this release is a bit of a letdown, "Ghostwriter: Season One" is an enjoyable trip down memory lane. It's a show with flaws like any other, but holds up as a hallmark in educational programming. It would make a very strong addition to video library of any family, as well as those who grew up with the show. Hopefully seasons two and three will follow from Shout in the near future. Highly Recommended.