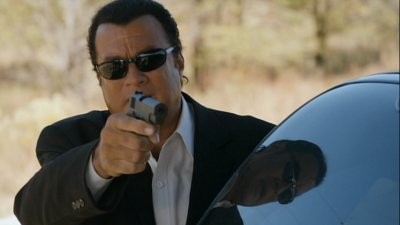 The Keeper is an action/thriller with Steven Segal as the headlining actor. It is a typical Segal flick, as it tends to have weak acting performances, a limited storyline, and plenty of butt-kicking action. As far as Segal movies go, this one was not amongst my favorites. I think he was pretty good in Under Siege and Exit Wounds, which weren't quality movies on their own right, but still fun action-packed flicks. Nevertheless, The Keeper was a solid Segal flick--much better than his recent and absolutely horrible Driven to Kill. In short, if you are looking for a mindless action-packed flick, then this movie will make for a good rental.

Segal plays a typical role as Rolland Sallinger. He is a tough retired LA cop, who is short on words and good at kicking ass. Sound familiar? In the opening of the movie, Rolland and his partner are in a shootout with some drug dealers. After killing all of the bad guys, they are left with two million dollars. His partner asks him about keeping the cash for themselves, as no one was expecting to find this much money. Rolland thinks his partner is joking. Unfortunately, he was not. He shoots Rolland and leaves him for dead. The corrupt cop thinks Rolland is dead, takes the money, and calls in back up. He is surprised to learn Rolland is barely alive and tries to kill him at the hospital, but Rolland gets the best of him. As a result, the department forces him into to retirement due to the messy politics surrounding the incident.

Now out of a job, Rolland is hired by Conner (Steph DuVall), a former cop friend turned wealthy businessman, to protect his daughter in Texas. The daughter, Nikita (Liezl Carstens) and her boyfriend Mason (Arron Shiver)were the recent target of a mobster hit. When Rolland arrives in Texas, he is greeted by the local detective, who makes it clear that he is watching him. It turns out the friend is in some shady dealings, as there is a lot of unspoken history about the reasons behind the attacks on the daughter.

As Rolland takes on his new role as protector, he adds new security to the house and sets up a strict protection detail to guard the daughter when she wants to go out. She has a knack for partying and drinking until she pukes. At the same time, he has to deal with Mason, who is an up and coming boxer funded by Conner. Mason has his own agenda and doesn't have the girlfriend's best interests at heart, which he makes clear by cheating on her in public and consorting with bad guys. Despite Rolland's diligent protection, Nikita is kidnapped. Rolland has to race against the clock to get her back and keep on the good graces on the local police as he leaves a trail of bodies. Along the way he unravels a plot filled with deceit.

Overall, The Keeper's strengths do not come from its storyline. The plot is generic and predictable. It shouldn't take much thought to figure out what is going on early into the movie. In other words, the major plot twist doesn't bring about any big surprises. Another weak factor are the acting performances, as they tend to be bland and almost unconvincing in some cases. What gives this movie any amount of excitement is the action. The scenes can be unrealistic, but they aren't too over the top. There's also plenty of them to help keep the entertainment levels high as the almost dull storyline progresses. In the end, The Keeper makes for a good action flick that you don't need to think about it. Segal fans will get the most value out of it. 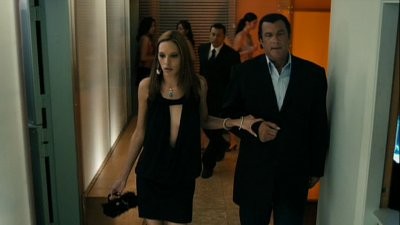 
Video:
The video in this release is given in an anamorphic 1.78:1 ratio widescreen color format. The picture quality is acceptable. It has a noticeable suffers grain. Still, the picture is more than viewable.

Audio:
The audio is presented in English 5.1 channel Dolby digital surround sound. There is also a dubbed stereo track in Spanish. The audio track is dialogue driven and audible throughout the feature. The DVD also has subtitles in English and Spanish.

Final Thoughts:
The Keeper is not an amazing movie. In fact, it probably shouldn't even be considered a good movie. Instead, it provides an entertaining experience for those who want an action-packed popcorn style flick that you don't need to think about it. If you like Segal or movies of this caliber, then The Keeper will make for a good rental.