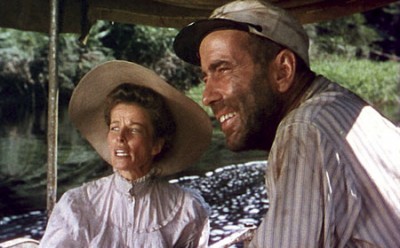 The African Queen, one of old Hollywood's most beloved films, has finally come to DVD after years of squabbling over rights and a meticulous digital restoration. The result is a happy new life for this painstakingly-produced romantic adventure, highlighted by two appealing lead performances.

After her brother's death, English missionary Rose Sayer (Katharine Hepburn) and Canadian riverboat pilot Charlie Allnut (Humphrey Bogart) flee German East Africa. The First World War has broken out, and they are behind enemy lines. Aboard Charlie's boat, the African Queen, Rose devises a plan to thwart a German gunboat downriver by outfitting the Queen as a floating torpedo and ramming the Germans. Charlie is reluctant; the plan is suicidal. Rose maintains her commitment to the mission, however, and Charlie finally relents. From this point forward, the story follows Charlie and Rose as they travel downriver, encounter a number of rapids and other dangers, and fall into a tentative romance. Tension therefore develops along parallel lines; as the objective of their explosive plot grows nearer, so do the two leads to one another.

I should admit that although I like The African Queen, there are a lot of people who will like it more than I do. There is no doubt that it's charming and consistently engaging, but in the end, it feels like John Huston-lite. Huston's films are often challenging, even from a contemporary perspective, and they are marked by strong writing, memorable characters, and propulsive, economic direction. While much of that is true in The African Queen, its story is ultimately too thin to sustain this ambitiously-mounted film. This script, credited to Huston and James Agee, is skillful, and maintains a good balance of character development, humor, and suspense. Perhaps what prevents the movie from reaching the higher plateaus of Huston's best films (like The Treasure of the Sierra Madre and The Maltese Falcon), is a lack of edge, and the fact that, although we like the characters here, they lack depth. There isn't much mystery as to who they are and what they want out of life. This renders the film's narrative arc kind of flat; onscreen danger can't compete with the metaphysical suspense of not knowing what a character may say or do next.

It's not news that The African Queen was a troubled production. Co-writer and director John Huston turned the film into a personal challenge to his own masculinity; uncredited co-writer Peter Viertel memorably fictionalized this in his novel (and later, screenplay) White Hunter, Black Heart (adapted to film by Clint Eastwood in 1990). The production difficulties are also well documented in the supplemental material included here. Given all that the cast and crew went through, it's amazing that the final film is as memorable and moving as it is. The leads were put through the wringer, but were able to deliver indelible portrayals nonetheless.

Hepburn and Bogart are well-matched. Hepburn's repressed, uptight old maid is somewhat more in her comfort zone than Bogart's squirrelly, ragged Allnut. Hepburn's performance is probably the more convincing of the two, even though Bogart won the Oscar. She exudes a buttoned-up comportment and contained Puritanical attitude that likely derives much from Hepburn's own Northeastern family background. Bogart, however, is playing against type as the screwy Allnut. He's primarily a comic character, a friendly, unsophisticated slob. Bogart is likable in the role; his metamorphosis from brooding loner into the gregarious Allnut is sure to have won over conservative oldsters at the Academy. But one can't help notice how hard he acts in the role; we are constantly being reminded that this is Bogart playing against type. It's an inescapable distraction. It's not a bad performance, just a very visible one.

Still, the leads generate a pleasing dynamic, and their budding romance is relatively believable. It is the heart of the movie, which, as it progresses, piles on a host of photographic techniques in order to keep the story credibly placed on an African river in 1914. The Technicolor photography by the great Jack Cardiff is excellent. The production design is brilliant. Studio shots and location footage are seamlessly matched. The restoration job highlights all of this wonderfully.

The Package
Paramount sent DVD Talk the Commemorative Box Set for review (a single-disc release is also available), and the packaging is excellent. A heavy card box holds a fold-out digipak case. The far right sleeve holds a set of lobby cards, while the center tray holds the feature disc and its audio-only companion. The far left sleeve holds a new reprint of Katharine Hepburn's memoir of the shoot, along with a collectible senitype. It's an attractive package of material, presented sturdily and with care.

The Video
The African Queen on DVD is a revelation. A long, meticulous restoration process has given new life to the Technicolor image. This 59-year-old film looks like it was shot yesterday. For those of us who remember The African Queen from previous VHS or Laserdisc releases - and even for those who have caught it on the big screen over the last couple of decades - it's like watching a whole new movie. There is a depth to the images that I've never seen before. The color timing is flawless. The accurate colors and lifelike contrast add enormous visual value to the movie. The rich, saturated Technicolor look is a real pleasure.

The Audio
The original mono soundtrack has been just as painstakingly cleaned up. Hiss and damage are gone. Clarity reigns supreme, and thankfully no attempt to construct a new multichannel track was attempted. It's a bright, bold track that betrays few remaining signs of age.

The Extras
I must say that for all the effort Paramount put into this package - and it's effort that certainly shows - there is a staggeringly paltry selection of disc-based content here. Truly, I have no use for the Collectible Senitype or Lobby Cards, nice momentary diversions though they are. I do appreciate the thoughtful inclusion of Katharine Hepburn's memoir, The Making of The African Queen or, How I Went to Africa with Bogart, Bacall and Huston and Almost Lost My Mind, which has been out of print for some time. It's a very funny and engaging account of the production that makes for a lively read.

Now to the discs themselves, where I'm afraid both casual and passionate fans of the film alike will be disappointed.

Disc 1, along with the feature itself, includes a single extra, Embracing Chaos: Making The African Queen (59:24). This is an informative documentary that combines archival footage with new interviews to tell the story of this film's arduous shoot. Talking heads include Nicholas Meyer, Martin Scorsese, Norman Lloyd, Jack Cardiff, Theodore Bikel, Rudy Behlmer, Richard Schickel, Guy Hamilton, and others. It's a very large group of participants, and their reminiscences and opinions are edited into a cohesive, linear narrative. It's a very good piece.

Disc 2 is not a DVD at all. It's an audio CD containing the hour-long 1952 Lux Radio Theater adaptation of the film, starring Bogart and Greer Garson in the lead roles.

No commentary, no restoration demonstration, no participation from Lauren Bacall (who was present for the location shoot), no tributes to Huston or Bogart or Hepburn... The slim bonus content is nothing short of baffling. This long-awaited release - and one that has been handled with such great technical care - deserves more.

The African Queen is a beloved Hollywood treasure. Although it is not a personal favorite of mine, it is without a doubt an enjoyable film with two excellent leads. This release by Paramount, however, is a hand-wringer. The visual and aural restoration is a masterpiece of film preservation. The well-mounted package, however, contains a shocking lack of bonus content. Fans are going to want this release no matter what. But based on the overall content and the price, I can't bring myself to go further than to say that this is recommended.