Warner Bros. // Unrated // June 22, 2010
List Price: $34.99 [Buy now and save at Amazon]
Review by Stuart Galbraith IV | posted July 5, 2010 | E-mail the Author
Oklahoma! has better songs, Seven Brides for Seven Brothers better dancing, The Band Wagon is more completely satisfying and Singin' in the Rain more fun. And yet overall A Star Is Born (1954) is the best movie musical of the 1950s. It's more adult, more emotionally honest, and more visually sophisticated in ways that put it way ahead of the pack. Independently produced for release through Warner Bros. it's also an anomaly among great '50s musicals, a film that would be way ahead of its time if it weren't also so immediate, so much of it a commentary on the time and place in which it was made. Outwardly a Hollywood fairy tale about a star's rise running concurrent with her lover's tragic fall, the movie is really less about The Price of Fame than an intensely personal, realistically told story of a movie star couple (played by Judy Garland and James Mason) battling his end-stage alcoholism. It's a Hollywood film about Hollywood but with a decidedly un-Hollywood theme: sometimes, love isn't enough.

A Star Is Born all but single-handedly spurred the restoration/director's cut movement that continues today. It premiered at 181 minutes but was butchered soon after with dramatically crucial material hacked out. In the early 1980s Ron Haver supervised a meticulous, revelatory reconstruction of the film. Whole scenes were restored while still-lost footage was approximated using set stills, publicity photographs, trims, and other material playing over rediscovered audio of the complete version. The 176-minute reconstruction debuted in 1983 while the cut version thankfully has vanished into oblivion.

Warner Home Video's new Blu-ray release is something of a disappointment. The transfer is okay but to the naked eye not that great a leap from the September 2000 standard-def DVD. Worse, all of the special features are maddeningly presented 4:3 standard format, meaning all the deleted footage, alternate takes, etc. in CinemaScope are pointlessly reduced in size and clarity to standard-def 4:3 letterboxed. Even on a big screen TV the results are hugely unsatisfying. Why wasn't any of this material remastered? 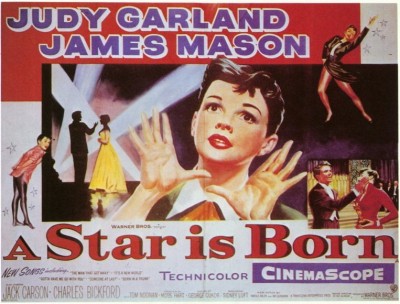 A remake of the excellent 1937 William Wellman movie co-written by Dorothy Parker and which starred Janet Gaynor and Frederic March, the 1954 A Star Is Born opens brilliantly, at an all-star Hollywood benefit at Shrine Auditorium. The star attraction, the Errol Flynn-like movie idol Norman Maine (James Mason) arrives dead drunk, and despite the best efforts of studio publicist Matt Libby (Jack Carson) to keep him under wraps, Norman wanders onstage right in the middle of a big number. However one of the performers, singer Esther Blodgett (Judy Garland), saves the day by working him into her dance routine, delighting if not entirely fooling the audience.

Looking for an easy pick-up, Norman follows Esther to a club where, sobered up and impressed by her performance of "The Man That Got Away," he takes her in under his wing, promising the starry-eyed torch singer a screen test while urging her to quit her day job with the band. All this sounds foolish to friend and pianist Danny McGuire (Tommy Noonan) but for Esther, Norman's belief is like an epiphany: he recognizes talent within her she never knew she had.

After several false starts Esther's career begins to rise under a new stage name, Vicki Lester, while Norman watches helplessly as his years of drinking and carousing catch up to him. He becomes unemployable, and though he initially resists Esther/Vicki's blossoming love he can't help but latch onto her like a life preserver offered an overboard passenger. Maybe with her support he can quit drinking and restart his career at another studio.

The Vaudeville/MGM-schooled Garland and classically trained (at the Old Vic) Mason would seem mismatched in terms of acting styles but they complement one another beautifully. Garland, having attempted suicide herself and long addicted to various uppers, downers, and painkillers, nakedly draws on her own personal experience, and the results onscreen are raw and emotionally devastating. (Though only 31, at times Garland looks a good 15 years older. Mental illness and drug abuse had taken its toll, and this was obvious even to 1954 audiences.) The film's famous final line is enormously moving because, no matter Norman's reputation, her unashamed bonding with him never falters, something Garland herself doubtlessly would have related to.

All this in turn seems to have inspired Mason, who is less reserved than he usually was in his 1950s films. Though his performance as a middle-class public school teacher addicted to painkillers in Bigger Than Life (1955) is more celebrated, he's even better as the pathetically alcoholic Norman. Every scene impresses: her growing resentment at his failures to recover, his self-loathing when he falls of the wagon. Every scene rings true.

Of course, the irony was that Mason's career was kicking into high gear in 1954 and would continue until his death three decades later, while for Garland A Star Is Born signaled the beginning of the end, a limited comeback weighted more heavily in terms of live performances rather than as a film star. Even so, it's hard to think of two better performances in a fifties film. Hers is from the gut and 100% authentic while, unusual for a leading male character in a '50s Hollywood film, his is tender and vulnerable.

As a musical A Star Is Born is less successful. When the numbers are carefully integrated into the story, as in the opening sequence at the Hollywood benefit and "The Man That Got Away" at the nightclub, they work beautifully. However, the flashback-within the film-within the film, the "Born in a Trunk" sequence, obviously intended as an elaborate showcase for Garland, and "Lose That Long Face," meant to contrast Vicki's sunny screen persona against Esther's hopelessness, stop the drama dead in its tracks. The numbers themselves are okay, but come off as second-rate imitations of gaudy MGM-style set pieces (as opposed to the Doris Day-Warner Bros. house style for such things), the very thing Esther makes fun of at home with Norman; even many Garland fans impatiently want to get back to the drama.

The screenplay by Moss Hart is intricately constructed. In one scene where Norman, driving his car, discusses Esther's future on the night they meet, the dialogue foreshadows nearly a dozen little details that turn up later in the story. Similarly, the film is unusually realistic about the Hollywood industry, then coping with severe competition from broadcast television, rising production costs, and other matters - all of which are incorporated intelligently into its screenplay.

This realism takes a beating in the film's cut version, which most notably loses a good ten minutes showing Esther struggling to make ends meet after Norman seemingly abandons her. In the short version, Esther really does become an overnight sensation, or nearly so, but in the reconstruction her struggles are treated much more true to life.

A Star Is Born was one of the first CinemaScope films and thus is plagued with the myriad problems of those early, inadequate anamorphic lenses: restricted focal lengths, distorted faces on anything more intimate than a wide medium shot, and which in A Star Is Born sometimes resulted in shots plainly out of focus. That it looks as pictorially sophisticated as it is - a tribute to director George Cukor and cinematographer's Sam Leavitt's efforts - is nothing short of miraculous, but it's never going to look perfect.

That said I found this 1080p 2.55:1 transfer a bit lacking. For a film this important (and a perennial catalog mainstay) I was hoping for an overhaul along the lines of what Fox did for The Robe (1953). Unlike that release, A Star Is Born never really pops off the screen. Colors look richer and truer and there's a bit more detail, but I'm surprised the chasm between my September 2000 DVD and 2010 Blu-ray isn't much, much wider.

Over the years I've heard rumors of additional footage located since the 1983 reconstruction but, if that's true, none of this material has been reinstated. An intermission break is included.

The DTS-HD Master Audio is fine; Dolby Digital 5.1 tracks in French and Spanish are also included, along with subtitles in all three languages.

All of the supplements are on Disc 2, a standard-def DVD. That wouldn't be so bad if not for the fact that nothing, nada is presented in 16:9 enhanced widescreen. Everything is 4:3, including all the letterboxed CinemaScope clips. On an HDTV these clips are reduced in size to the point of literally resembling a letterbox. Why this was done is anyone's guess. Supposedly Warner Bros. spent a lot of money transferring the film, so why spend a buck and a quarter recycling but not remastering special features a full decade old?

And, as others have already complained, the wealth of material - multiple versions of "The Man That Got Away," alternate takes and camera angles of "Here's What I'm Here For," "Lose That Long Face," "Trinidad Coconut Oil Shampoo," Norman Maine's final scene in the film (with different underscoring), and an outtake from "When My Sugar Walks Down the Street" all just sit there with minimal contextualizing via blandly narrated voice-over introductions. This is a disc crying out for a scholarly commentary track and "making of" documentary, neither of which is included. (The late Ron Haver's book A Star Is Born: The Making of the 1954 Movie and Its 1983 Restoration is still the standard bearer, one of the best of its kind. The full-color booklet included with the Blu-ray is like a condensed version of that.)

Instead, the material is overly familiar and most of it seen before: The "Pantages Premiere TV Special," with additional newsreel and CinemaScope footage of the same event. Also included is a promotional film to exhibitors introduced by Jack L. Warner, a brief film effects reel, A Star Is Bored, a Bugs Bunny/Daffy Duck cartoon, and trailers for the 1937, 1954, and 1976 versions. An "Audio Vault" includes myriad audio-only supplements, including outtakes and an intriguing 1942 (yes, 1942) radio version with Garland and Walter Pigeon.

If you don't already own the September 2000 DVD, the new Blu-ray edition is certainly the way to go, but as a longtime fan of the film that's seen both cuts in 35mm and runs the standard-def DVD every few years, I was expecting a more spectacular leap to high-definition that this A Star Is Born offers. It's still Recommended, but I'm much less excited about its release than I expected to be.