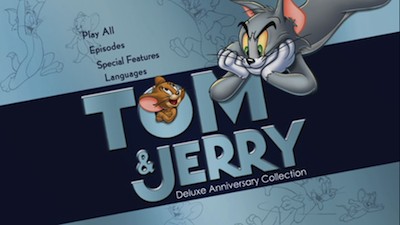 Listen, guys, I love Tom & Jerry cartoons. I love the violent gags, the ultra-kinetic animation, the consistently inventive scenarios and schemes. I asked to review Tom & Jerry: Deluxe Anniversary Collection because even though I own the three Spotlight Collections, I take any chance I can get to rewatch these cartoons, and I had a hope that maybe we'd get remastered versions of the selected cartoons or some cool extras or maybe even the missing shorts ("Mouse Cleaning" and "Casanova Cat") that have yet to be put on DVD in North America.

But from what I can tell, nothing has been done to improve the DVD transfers on this 2-disc set, and since there is pretty much nothing new here, I can't see any reason for our readers to be excited. Worse, I can't really just forget that and have some fun interacting with the material anyway because once again the folks at Warner Bros. have proven that they have all the learning abilities of the cartoon animals they shill, running again and again into bad situations and stumbling face first into the same old trouble they stumbled into before. Forget a review of the quality of these classic cartoons, it's time to get out your scorecards and cover some old ground.

My guess is the Tom & Jerry: Deluxe Anniversary Collection is designed for casual animation fans. The first disc is dubbed "Oscar Winners and Classics," and it has 20 of the best-known and best loved Tom & Jerry shorts. All 20 have been on the previously released sets [reviews of Spotlight Collections 1 and 2; volume 3 was never submitted for review], but I can see the commercial appeal of compiling them all on one disc. For the curious, the track list is:

That's a great selection, and if you don't already own all of these, you really should consider getting your hands on them--but this Deluxe Anniversary Collection is not the way to do it. As old-time DVD collectors may recall, both the first and second Spotlight Collections had censored cartoons on them, and eventually Warner Bros. did an exchange program in order to live up to the advertising that they were giving fans the original cartoons uncut. Well, guess what? Nowhere on this new set are there any promises that the cartoons are either uncut or remastered and you're going to get neither.

Just as they were on the original release of the Spotlight Collection, Vol. 1, the shorts "The Milky Waif" and "The Little Orphan" have been edited to remove scenes where characters are seen in blackface. Likewise, as it had at one time been on Vol. 2, the short "The Lonesome Mouse" has redubbed dialogue to remove the stereotypical dialect of the African American maid that works in the house where Tom lives. (You can tell mainly by the altered lyric in the song she sings in the kitchen just before Jerry attacks.)

Now, again, I get the thinking behind the censorship. If the Tom & Jerry: Deluxe Anniversary Collection had been released as a product being marketed to little kids, I'd think that was fair enough. That's not the case, though. As the packaging and a long and unskippable warning at the start of the disc tell us, this is intended for the adult collector. Furthermore, the warning says that the reason for presenting the cartoons as they were originally made is because pretending racism never existed in entertainment of this kind is doing a disservice to history. Well, bully for them. They've claimed they had every intention to ride the high horse but then never climbed aboard. Naturally, I am not defending the racism and hurtful clichés in any way, but classic animation deserves the same respect classic films do. If we're not editing the black cook out of Sullivan's Travels because we believe adults can properly contextualize the stereotype he represents, why can't we be expected to do the same with Tom & Jerry?

Then again, I don't even think it's intentional, because the effort is so inconsistent and lazy. Judging by the evidence I have, the maid's dialogue in "Saturday Evening Puss" is the original vocal track, and not the later overdub. Yet, "Saturday Evening Puss" was censored on the old edition just like "The Lonesome Mouse." Why is one fixed and one not? Is there any logic at work here? 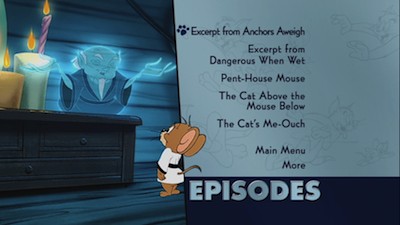 DVD 2 takes a different tack with the series. Subtitled "Through the Years," it gathers together different incarnations of the Tom & Jerry cartoons that followed the successful MGM shorts. The contents list of previously released material is as follows:

* Excerpt from Anchors Aweigh (Jerry dancing with Gene Kelly)
* Excerpt from Dangerous When Wet (the cat and mouse swimming with Esther Williams)
* Selections from the Chuck Jones Collection:
- Pent-house Mouse
- The Cat Above and the Mouse Below
- The Cat's Me-Ouch
* Karate Guard (previously a bonus feature on the Spotlight Collection 3, this was the last Tom & Jerry directed by Joseph Barbera, released 2005)

These selections are new to DVD and come from various TV shows:

The quality of these shorts rapidly diminish once we move out of the Chuck Jones era and into the TV era. The most recent selection, "A Game of Mouse and Cat," is a little better than the '70s and '80s junk, but not by much. (And the less said about "Flippin' Fido," in which the characters are turned into kindergarteners, the better.) Anyone buying the Deluxe Anniversary Collection just for these "new" releases will be sorely disappointed in their purchase. 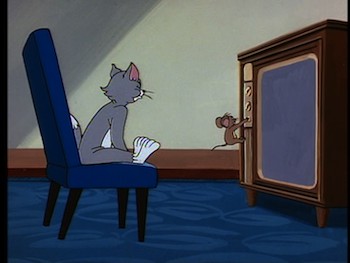 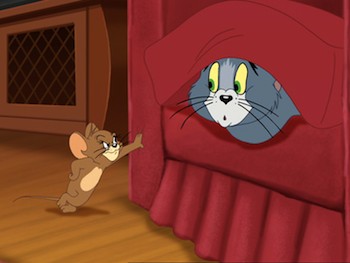 (left to right: "Cosmic Cat and Meteor Mouse;" "A Game of Mouse and Cat")

I feel like I have spent more time checking and double-checking information than I have watching the cartoons themselves. My eyes are starting to blur. If any of our readers have more info to share about this release, please start a thread in our forum to update everyone with new or more complete information. There should be a discussion link in the byline above.

Video:
The Tom & Jerry cartoons were created at different aspect ratios over the years, though most of them are in a standard full frame format. The image quality is varied and mostly so-so. The cartoons show their age and have never really gotten a proper clean-up in any of their releases. Four of the cartoons on DVD 1 are touted as anamorphic widescreen transfers, but two of them, "Touché, Pussy Cat" and "That's My Mommy," despite their 2.66:1 title cards, immediately go to a matted 1.78 image once the cartoon starts. Here, compare the difference: 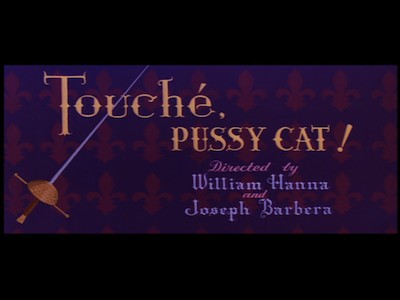 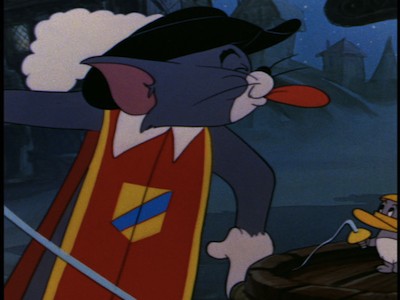 Note: "Touché, Pussy Cat" has also had differing audio tracks. This transfer has the track with the "Frère Jacques" lyrics.

The other two selections on DVD 1 with anamorphic transfers, "The Egg and Jerry" and "Tops with Pops," stick to the widescreen aspect ratio, 2.66 for Cinemascope. Example: 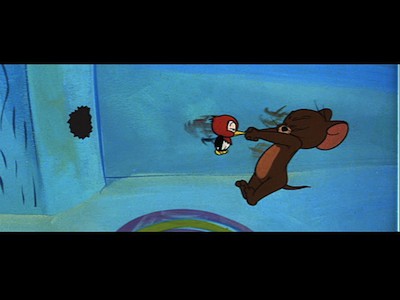 The switching around is somewhat forgivable, as there were different prints of some cartoons in both Cinemascope and the more common Academy ratio to accommodate different theatres. Still, with the cartoons on disc 1, they tend to look like they were cropped improperly. Check out the awesome screencap of "Touché, Pussy Cat" midway down Paul Mavis' review of Tom and Jerry's Greatest Chases, vol. 3 (not to mention Paul's great opening paragraph challenging Warners' censorship) and compare it to my own. The only other cartoons presented in enhanced formats on the Deluxe Anniversary Collection are the Chuck Jones pieces on DVD 2, which are presented in the same fashion as on Tom & Jerry: The Chuck Jones Collection: a matted 1.78:1 aspect ratio preserving the original theatrical 1.33:1 image. (See Randy Miller III's review of that release for further explanation as to what this means.)

Sound:
The original soundtracks--except where otherwise altered--have been mixed in their original mono format and sound fine. Nothing great, but nothing bad either. There are also Spanish audio tracks in mono.

Warner Bros. has included English subtitles for the deaf and hearing impaired, as well as French subtitles...well, for people who speak French.

Extras:
DVD 1 has multiple trailers for other cartoon DVDs, as well as a new 18-minute, 50-second documentary called "Much Ado About Tom and Jerry." It is a brief history of the cartoon franchise, including how and why the series changed over the years, and it features vintage interviews with William Hanna and Joseph Barbera. The Gene Deitch era is even covered and some clips are shown, though those cartoons are represented nowhere on the Deluxe Anniversary Collection.

Well, except for maybe on some of the menus, which are put together so willy nilly and with zero regard to what era they are representing that even some Deitch artwork sneaks in there.

DVD 2 has no extras. 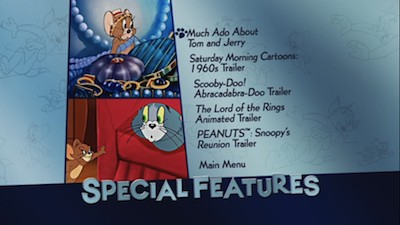 The Tom & Jerry: Deluxe Anniversary Collection comes in a standard-sized keepcase made from clear plastic, with a hinged second tray inside and DVD info printed on the interior covers. There is also an embossed outer slipcase with the exact same art and info as the front and back covers in the case.

FINAL THOUGHTS:
It pains me to say this, but Skip It. While I still think it may be better to have the Tom & Jerry: Deluxe Anniversary Collection's first disc in your collection in lieu of having no Tom & Jerry at all, the release of this unnecessary edition is a haphazard cash grab that does nothing to improve older editions and even reinstates some mistakes that fans and collectors went through great lengths to have fixed. The overall disregard for the phenomenal back catalogue of MGM cartoons continues to astound me, and given how many problems the Tom & Jerry collections have had over the years, maybe I should be counting my blessings we don't have to go through these ordeals more often. Get the Spotlight Collections if you want some cat and mouse animation action. They are more complete and overall they make for a more satisfying purchase. 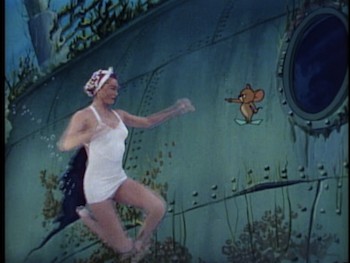 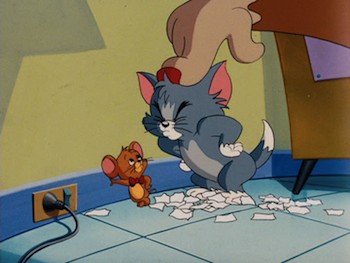