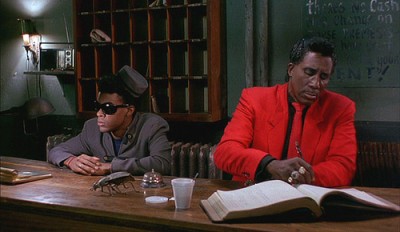 Jim Jarmusch's Mystery Train was made over twenty years ago, but it feels as fresh and invigorating as anything. Like many Jarmusch ventures, this one feels both rambling and focused, with a parade of diverse characters taking us on assorted jaunts through the cradle of American popular music: Memphis, Tennessee. "Rambling" is in no way meant to be read negatively here, however, as Jarmusch knows and trusts his characters (and his actors) to a rare extent. He allows them to develop and register their personalities in an organic way that heightens both realism and unpredictability; this approach also benefits Jarmusch's oblique, situational comedy and his penchant for lovely, understated camerawork (here achieved with the invaluable aid of the great Robby Müller).

Mystery Train is divided into three episodes that all take place on the same day in Memphis. They track the varied fortunes of three groups of characters who all wind up spending the night in the same fleabitten hotel in a neglected part of town. First, a young Japanese couple (Youki Kudoh and Masatoshi Nagase) with a deep love of American music arrive in Memphis by train on a pilgrimage to Sun Records and Graceland. The second story concerns an Italian widow (Nicoletta Braschi) who is delayed in Memphis for an extra night when her flight is canceled. She struggles to make sense of her situation against an onslaught of tall tales and aggressive strangers. The third and final story follows a trio of loosely affiliated losers (Joe Strummer, Rick Aviles, and Steve Buscemi) who find themselves in need of a hideout after one of them shoots a liquor store clerk. In all three stories, the protagonists wind up at the Arcade Hotel, a rattrap operated by a sarcastic, mannered night man (Screamin' Jay Hawkins) and a desultory bellboy (Cinqué Lee).

Should Jim Jarmusch decide to stop making films today, his influence on contemporary filmmaking and a high place among unique American auteurs would nevertheless be assured. In Mystery Train, and in most of his other work, Jarmusch is simultaneously intuitive and methodical. His stories tend to be about lonesome figures - and even when his characters appear in groups, they often appear lonely or "lost" somehow - on some kind of quest. His characters spend a lot of time observing and reacting to situations, characters, and other assorted stimuli; perhaps the most interesting aspect of Jarmusch's style is his ability to portray characters that (often silently) process and interpret information, the effect of which is demonstrated in their subsequent behavior.

Mystery Train positions its characters in a place inhabited by the ghosts of American music. The direct and indirect influence of these ghosts on the film's protagonists is one of its consistent and driving themes. The Memphis of Mystery Train, which was shot in 1988, has seen better days. Aside from its urban center - a group of glinting towers seen only in the background - Memphis is a weedy, decaying, desolate ghost town. The former headquarters of Stax Records is shown as a boarded-up, whitewashed relic, recognizable thanks only to the word "Stax" spray painted in red over its façade. The Japanese couple, on their pilgrimage to Sun Records, is treated only to a rushed oral history by a young guide. The studio is otherwise an empty shell. Most telling and eerie of all, each and every room of the Arcade Hotel is haunted by a different portrait of "the King" - Elvis Presley.

The music is still there, too, although it's only heard on the radio. Songs by Elvis and Roy Orbison and Junior Parker waft across the airwaves, suggesting the past glory of Memphis and its lasting importance. The songs, however, sound all the more lonely and ghostly piped out of speakers, heard by only a few, rather than being performed live in crowded halls or recorded in busy studios.

The characters who move through this weird landscape each have to grapple with this legacy - a legacy that is foreign to some (like the Braschi character) and familiar to others (the trio of losers in the third episode). Interestingly, that third and final segment is propelled by Joe Strummer's character being angered into a hectic, vengeful stupor after his co-workers insist on calling him by a hated nickname: "Elvis." The subject of an unavoidable cultural legacy has never been investigated with such subtle sensitivity - in Mystery Train, we observe the impact of this kind of legacy on specific, individual characters, illuminating the influence of towering icons on private lives.

Image
Those waiting for The Criterion Collection to stumble will be disappointed, for the label once again fails to do so here, presenting Mystery Train in an enhanced 1.77:1 transfer that makes the film look like it was shot yesterday. Supervised by Jarmusch, the transfer replicates the richly-colored production design by Dan Bishop and the vivid photography by Robby Muller with intense attention to detail. Digital artifacts are non-existent.

Sound
The audio is the original, fully restored monaural track. This is one of the best mono soundtracks I have ever heard. Going back to the DVD just before writing this review, I assumed I'd be addressing a stereo soundtrack. Somehow, a remarkable dynamic range is achieved here within monaural confines; music, sound effects, and dialogue are brilliantly balanced. It's a crisp and engaging track that manages to achieve true expansive ambience within a single channel. Impressive.

Bonus Content
In lieu of a commentary track, Jarmusch provides an audio-only Q&A With Jim, which runs about an hour (a time stamp is not provided) and features the director answering questions emailed by fans. It's a really good time, and full of production insights and some very funny tangential anecdotes. Next are a selection of excerpts from a 2001 documentary called Screamin' Jay Hawkins: I Put a Spell on Me (17:39), which includes interviews with Jarmusch as well as Hawkins; these excerpts mostly track the development of the professional relationship between the two. Memphis Tour (17:35) is a video piece that takes a new look at Mystery Train's locations, many of which look a hell of a lot better than they did in 1988. There is also a production gallery of Polaroids, as well as a more formal Photo Gallery featuring the work of Masayoshi Sukita, the production's still photographer.

Mystery Train is one of Jim Jarmusch's strongest and most lovingly-made films. It's a tour of American culture through the eyes of outsiders, and a tribute to a time of great cultural productivity in a city that has since retreated from the limelight. Criterion's DVD offers a stellar technical presentation and enjoyable bonus content. Highly recommended.