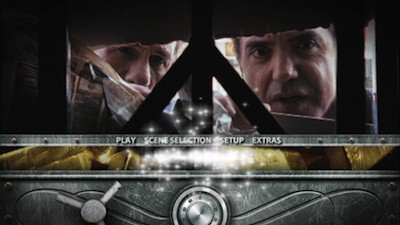 The Dukes is a light comedy for our current climate, about the changing times and what folks will do to get along. It's the kind of warm-hearted fluff that was all the rage coming out of England about ten years ago, with the unemployed working class finding unique ways to put money in their pockets (think The Full Monty, Calendar Girls). It will probably age as well as those movies (as in, not very) and may turn the stomachs of the more cynical among us, but for right now, what the hell, give this one a try.

The story revolves around two Italian-American brothers, Danny (Robert Davi) and George (Chazz Palminteri), who once upon the 1960s were part of a nearly successful doo wop group called the Dukes. Music has changed since then, but unfortunately, these two guys have not. A couple of New Yorkers transplanted to sunny Los Angeles, they are perpetual also-rans, almost grabbing the brass ring and always falling short. Danny is divorced, and he can't afford to pay for his kid's teeth. George is an aging chubby chaser whose own teeth are giving out on him. Both are in debt to their Aunt Vee (Miriam Margolyes), who lets them work in her restaurant, and their longtime manager (Peter Bogdanovich) can't do more than book them stupid commercials.

One day, Danny hears George's dentist talking about the gold he and his partners bought for false teeth. Apparently there is a mother load of the stuff hidden in a lab, and when George hears about it, he hatches a scheme to pull off a heist. They enlist their pals Armand (Frank D'Amico) and Murph (Elya Baskin) to help them out, and Armand brings in a safe expert (Bruce Weitz) to show them the ropes. With all the world piling on them, it seems like the only option available. What follows is a series of mishaps from the gang who can't do anything straight.

The Dukes is the first-time directing effort from star Davi, who also co-wrote the script with James Andronica. Davi is one of those guys--or more accurately, "that guy." As in, "Oh, he's that guy." The actor has appeared in a ton of movies you've seen, ranging from Die Hard to Showgirls to The Hot Chick. On TV, he's guested on "T.J. Hooker," "The A-Team," and more recently, "Nip/Tuck" and six episodes of "Stargate: Atlantis." He's that guy.

As a neophyte director, Davi isn't bad. The Dukes wobbles from time to time, unsteadied by a rookie's need to show off. The first 20 minutes in particular have a lot of unnecessary camera movements that looks a little like Davi trying to cover up for nerves, or maybe a thin script. And thin it is. There is a more than obvious three-act structure in The Dukes. Act I, everyone has problems; Act II, let's steal some gold; Act III, let's take over Aunt Vee's restaurant and put on a show. Surprisingly, of the three acts, it's Act II that gets the least attention. There isn't much to this big heist, the plan is rudimentary, and the technique is straight out of a million other robbery movies. Yet, somehow it still managed to make me pretty tense. Would the guys get out of there? Are they going to get caught?

I think my investment really came down to the characters, and more specifically, the actors who played them. Robert Davi and Chazz Palminteri make a fantastic duo, and I just wanted to see them getting along and doing well. They don't have a mean bone in their bodies, and neither does this movie, so even when every critical instinct cried out against some sloppy storytelling or convenient narrative switch-up, I couldn't help but shrug and keep going along myself. Hell, I love to gripe about Peter Bogdanovich, and even he's good in this movie. And for a male-centric movie, all of the women characters get a fair shake so that they are worked into the story in such a way that they matter. The Office's Melora Hardin and former Playmate Eloise DeJoria turn in solid performances as Danny's ex-wife and the waitress at the restaurant, respectively.

If you still don't get what kind of movie The Dukes is, it's the kind of movie that ends with a song. One performed by the characters. A celebratory number to let us know they are going to be okay, that all of these shenanigans paid off. Yes, it's a hackneyed convention, but hey, at least they keep their pants on. The Dukes is a picture about getting past all the things that trouble us, and for about 90 minutes, I didn't have a care in the world. 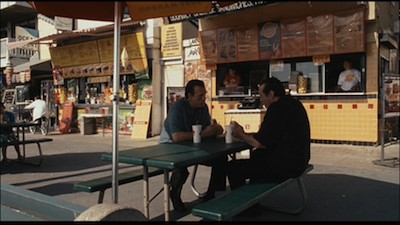 Video:
The 1.85:1 picture is decent, but sometimes a little short of what we should expect from a 2007 movie. Some scenes have a grainy, distant look, particularly ones that are darker and/or lit with an orangeish light, such as in Chazz Palminteri's bedroom after one of his dates. Thankfully, this is not a common occurrence, and overall, the image quality is about average.

Sound:
The original English soundtrack is mixed in 5.1 surround. It's a fairly centered mix with only a few interspeaker effects. It's not exactly a movie that is crying out for more, though, so I can't see as how anyone would mind. There is also a 2.0 mix that isn't listed on the box.

Subtitles are available for the deaf and hearing impaired.

Extras:
There are four extras here:
* Audio commentary by Robert Davi and director of photography Michael Goi
* Around an hour of interviews with cast and crew
* About five minutes of deleted scenes.
* A theatrical trailer

Davi recorded video introductions for the movie itself and the deleted scenes, as well. They play automatically. There are two deleted scenes, one that involves a cut story aspect featuring a mysterious woman and the other an added aspect regarding expensive health care for the Armand character, adding to his motivation to be part of the crime.

Between the interviews and the audio commentary, you get probably all you need to know about this movie. It's a real labor of love, and that kind of enthusiasm shows through. Davi is eager to talk and is forthright enough to make the commentary interesting, and Goi chimes in with lots of technical information.

FINAL THOUGHTS:
Recommended. Sometimes a movie wins over even the most jaded among us in spite of ourselves. The Dukes isn't a fantastic movie, but it's a very good one. First-time writer/director Robert Davi surrounds himself with an excellent cast and puts them and himself on a straight and narrow path that is short on originality but uses the ideas it picks up from others very well. The tale of ex-doo wop singers pulling a bank heist is meant to be a salve for the desperate economic times it depicts, and by playing it warm instead of cool, The Dukes actually kind of works. 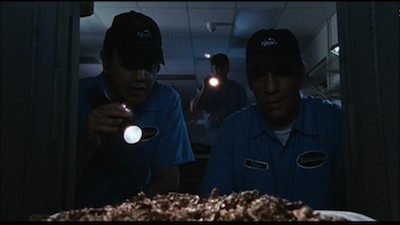