As a lifelong fan of "American football," I have always been completely mystified about how the United States is fanatical about the sport and the rest of the world just doesn't get it. To that end, I have no idea how soccer is in any way, shape, or form considered entertaining. Cultural differences aside, I never knew that football had nearly enough interest in Japan to warrant an anime series, much less one that has achieved some modicum of success. Eyeshield 21 is a surprisingly good anime series about American football that spans 145 episodes and a couple of OVA's for good measure. It has also spawned video games for the Wii, PSP, and Playstation 2. Eyeshield 21: Collection 1 contains the first 13 episodes of the series.

Sena is your typical, nice-guy loser who's about to enter his first year of high school. Throughout his life, Sena has never been able to make any real friends outside of Mamori--a girl several years older who coddles Sena like her little brother. To make friends, Sena looks to join a school club and discovers the football club. Or rather Hiruma, the leader of the two-person football club, discovers Sena's running speed. Sena has run from bullies his whole life. As a result, he developed exceptional speed and quickness that directly correlate to the skills of a runningback in American football. Hiruma notices Sena putting some slick moves on a gang of bullies and immediately starts devising a scheme to get Sena into some pads. 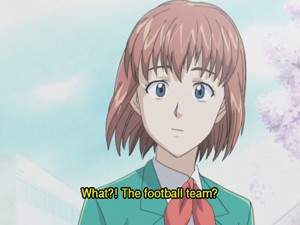 Sena is petrified of rough sports such as football, so Hiruma convinces him to join the football club as a manager--someone who handles the day-to-day operations of the club. However, to join the football club, Sena agrees to play if the team is behind. Afraid that other clubs will recruit Sena due to his lightspeed running, Hiruma convices Sena to wears an eyeshield to keep Sena's identity a secret. As such, Sena plays the dual role of manager and star football player. He makes excuses to disappear during games, so he can reappear as the mysterious Eyeshield 21--the Lightspeed Runningback. 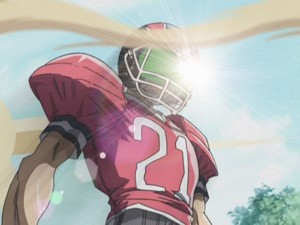 A majority of the episodes in this set are devoted to the action on the football field. A total of three games occur across the 13 episodes included in this boxset and each of the games spans multiple episodes. The other episodes follow the trials and tribulations of the football club practicing and trying to recruit students to play the unknown sport.

It is fascinating to see how a sport that you have known your entire life is explained to a foreign audience that has no clue what it's all about. The fooball clinics at the commercial breaks were informative and similar to the Go lessons of Hikaru No Go. These football clinics were kind of amusing. As someone who often visualizes distance in terms of yards and football fields, it was hilarious to see explanations describing how long the 40 yard dash is in terms of the metric system. While educational to football newbies, some of the tactics and plays used during the show would certainly draw a penalty flag, but that's nitpicking when you consider that there are players with vampire teeth, Go-Go-Gadget arms, and lizard tongues. For the most part, Eyeshield 21 is an excellent introduction to football and I can easily see this show creating legions of new American football fans. 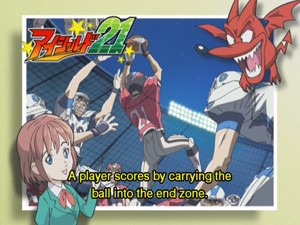 Eyeshield 21 is at its best when there's football action on the screen, which is most of the time. The games are exciting and the series moves at a quick clip. There were quite a few episodes where I was surprised that the credits were already rolling. It should also be noted that some of the comedy and slapstick portions are hilarious and there were more than a few laugh out loud moments. When the show moves away from the football field, the story reveals its warts. The whole notion that Sena has to wear an eyeshield to protect his identity is weak. Sena is not some superhero who needs to hide his identity from criminal masterminds. Hiruma claims that if people find out that Sena runs fast, then he will be recruited by other sports clubs. Sena also keeps his identity secret from most of the team, which includes his lifelong friend Mamori whose lack of observational skills is eclipsed only by Lois Lane. 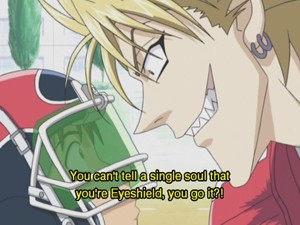 We know nothing about Sena except that he was bullied his entire life and had no friends, except Mamori, until he joined the football club. How are his grades in school? Who are his parents? Are they even at the games supporting their son? What else does Sena like? Does he have any love interest? I want to know more about him. I want to know more about his friend Mamori. What about Sena's teammates? Why does Hiruma have fangs and a loaded bazooka handy at all times? Why does Kurita look like he's from Hello Kitty? In fact, you get more engaging background story on the rival team's players Shin and Sakuraba. This critique is made purely out of love, however. The fact that I am truly interested in learning more about these characters is a compliment to the show so far. They have 132 more episodes to cover those topics; I just hope for more in the next boxset.

Sound: The audio is Japanese 2.0 with English subtitles. The sound was average for a television anime series with no noticeable distortions or other anomalies to skip past your eardrum and drive directly into your spinal cord.

Video: The series is presented in full-frame 4:3 video. I am guessing that the art budget was limited because many sequences of animation are used repeatedly in these first 13 episodes (such as Sena's first kickoff return, which I saw in full, at least three separate times). As for the transfer quality, the image is vibrant, but there was some minor pixelization throughout the series.

Extras: The only extras are for other anime released by Sentai Filmworks and the DVD credits. Come on Sentai Filmworks! There are so many possibilities with football anime extras. At least get a football player to comment on one of the football games.

Final Thoughts: As an introduction to football, Eyeshield 21 does good job at covering basic football rules and strategy. The sport of football has a high learning curve and Eyeshield 21 makes what can be a daunting subject to newcomers fun to learn. Yes, the story is simplistic and lacks substance, but it's highly accessible and the action is truly fun to watch. You will find yourself rooting on the Deimon Devil Bats like they were your own home team. I can't wait to find out if Sena will develop into a worthy adversary for local superstar player Shin in the upcoming episodes. This show will likely appeal even to non-sports fans, but if you like the the sport of football or are intersted in learning what it's all about,then there is no doubt. Eyeshield 21 is whole-heartedly Recommended. Ya-Ha! 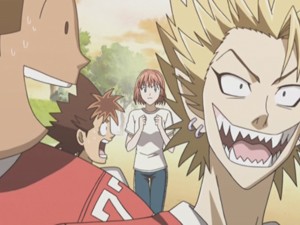