Vivendi Entertainment // Unrated // May 11, 2010
List Price: $14.93 [Buy now and save at Amazon]
Review by Stuart Galbraith IV | posted May 27, 2010 | E-mail the Author
Though imperfect, the miniseries of (Larry McMurtry's) Streets of Laredo (1995) has many of the same qualities as its predecessors: Lonesome Dove (1989) and Return to Lonesome Dove (1993). A tapestry of rich characterizations, some drawn from history, others recurring characters in McMurtry's novels, as well as some original creations, the three-part, four-hour and 23-minute show unfolds at the leisurely pace of a novel itself, rarely disappointing. At its center is a marvelous, genre career-capping performance by James Garner, reportedly everyone's first choice to play either Gus McRae or Woodrow Call in the original Lonesome Dove, parts that eventually went to Robert Duvall and Tommy Lee Jones. Garner, who's had a long association with the Western genre since the 1950s, is superb.

While I would have preferred that this had received the same lavish Blu-ray treatment accorded to Lonesome Dove, on its own modest terms Streets of Laredo looks quite nice in its clean, colorful full-frame presentation. There are no extras. 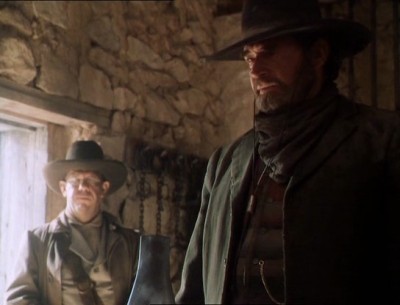 Call soon determines the many robberies are actually the work of two different, bloodthirsty criminals, working independently. The first and more dangerous is nearly a boy, Joey Garza (Alexis Cruz), a blonde-haired, blue-eyed half-Mexican teenager eager to kill any and all gringos ever since his white father sold him off to the Apache, away from his doting prostitute mother, Maria (Sonia Braga), and her two younger children: a mentally retarded boy and a blind girl.

The other is the animal-like "man-burner" Mox Mox (Kevin Conway), who enjoys torturing innocent animals and people, infamous for burning them alive. When Lorena, who some time before was nearly burned alive herself, learns Mox Mox may be behind some of the train robberies, she decides to locate her husband, who by this time has changed his mind and left to join Capt. Call, along with Kickapoo Indian tracker Famous Shoes (Wes Studi).

One of the peculiarities of the various Lonesome Dove miniseries (two more followed Streets of Laredo) is that despite their continued popularity and acclaim few actors have played the various continuing characters more than once. Thus, Captain Call has been played by Tommy Lee Jones, Jon Voight, James Garner, Jonny Lee Miller, and Karl Urban (in that order), plus Lee Majors in a brief television series appearance. That the roles formerly played by Jones, Diane Lane, and Timothy Scott are here essayed by Garner, Spacek, and Shepard could hardly be considered anything worse than a lateral move. Jones was terrific in Lonesome Dove but Garner appropriately brings to the part a half-century of genre experience.

Over the course of his long career, James Garner has to some degree been taken for granted by his industry and fans, partly because his screen persona seems so effortless, and partly because this persona was so incredibly entertaining that he ended up spending a large part of his career performing slight variations of it.

In fact Garner was like a postwar W.C. Fields, with two distinctive characterizations. The first was the sly grifter as personified by Garner's first breakthrough role, as Bret Maverick on the popular Western-comedy series. But just as Fields had another distinctive persona, the henpecked husband who wanted nothing more than to spend a peaceful afternoon sipping applejack on the front porch, chewing the fat with friends, Garner's second, similar characterization was an everyman constantly harassed by bill collectors, shady pals, needy ex-girlfriends, obnoxious public servants, etc., a role he played to perfection on The Rockford Files.

Many of his movie roles drew from one or both of these personae: as "The Scrounger" in The Great Escape, for instance, or in the popular Support Your Local Sheriff! and its sequel. But Garner could be terrific in a wider range of parts: as the hard-luck racer in Grand Prix, as Wyatt Earp in the interesting Hour of the Gun, as Raymond Chandler's famous private eye in Marlowe. For years I'd heard about Skin Game (1971), in which Garner sells his black "slave" (Louis Gossett Jr.) over-and-over in an outrageous pre-Civil War scam, but until it was released to DVD as part of the Warner Bros. Archive series I had no chance to see it. It's a revelation, striking an almost indescribable balance between high comedy and daring social criticism near the peak of racial strife in America, and in which Garner could stretch this persona in new and interesting ways. I doubt very much the film could be made today, any more than The Rockford Files could be remade with another actor, as was diastrously proven recently. Health problems, including a small stroke in 2008, have put at least a temporary halt to Garner's career, but I hope he's aware of the enormous, ongoing affection and respect his many fans will always have for this fine actor.

In Streets of Laredo, his halting delivery recalls Tommy Lee Jones' performance in some ways, but Garner's long association with the genre for the viewing audience parallels the respect Call engenders from Pea Eye and Brookshire, and adds verisimilitude to scenes of Call tracking and anticipating his targets' movements. What finally happens to Call at the end of the story is, in Garner's hands, beautifully played.

The novel and the teleplay draw interesting parallels between ex-whores/devoted mothers Lorena and Maria, between Brookshire and Plunkert and their wives, and so on, always in interesting ways. Maria's Oedipal loyalty toward her killer son becomes inexplicable near the end; perhaps the novel handles this better than the miniseries, and Alexis Cruz is pouty and uncharismatic, a disappointing villain.

Besides Garner, Spacek and Brazilian actress Braga are likewise excellent, and it's refreshing to see strong, careworn women in their late-forties in such meaty, rewarding roles. Smith is also good in the kind of part he seems doomed to play repeatedly, and comedian George Carlin is okay in a key supporting part. Randy Quaid and Ned Beatty appear as John Wesley Hardin and Judge Roy Bean, roles that, more than a little bit, play fast and loose with their historical counterparts.

Filmed in 35mm full frame, Streets of Laredo looks just fine, with plenty of detail and with a strong and subtle color pallet; I only wish this was being released on Blu-ray as well. This no-frills, Region 1-encoded release with three 85-minute episodes on two single-sided, dual-layered discs with an above average Dolby Digital Stereo track but no alternate language or subtitle options, and no Extra Features.

To say Streets of Laredo is only about 80% as good as Lonesome Dove could hardly be considered an insult, as that series is still the best Western miniseries ever, earning this no less than an A-, bumped back up to an "A" on account of Garner's fine work. The lack of extra features is disappointing, but otherwise this is Highly Recommended.

* Further confusing things is that Streets of Laredo was also the name of the screenplay McMurtry and director Peter Bogdanovich wrote back in the 1970s for John Wayne, James Stewart, and Henry Fonda. That film was never made, but McMurtry readapted the material into the novel renamed Lonesome Dove.