Cold War Spy Collection: The Glory Boys & The Contract, The


Gerald Seymour is a British journalist who made the switch to novelist in the mid-70s, beginning a fruitful career that continues to this day of fiction sent in the world of international espionage. Like many successful authors, his works have been adapted to the visual medium, both on the big and small screen. "The Cold War Spy Collection" captures two adaptations that made their way to television in the form of three-episode miniseries. "The Glory Boys" produced in 1984, featured two acting heavyweights in the form of Rod Steiger and Anthony Perkins, working from an adaptation of Seymour's novel by the author himself. "The Contract" produced four years later would feature a smaller cast but still manage to capture a tone somewhat consistent with "The Glory Boys."


"The Glory Boys" is a frustrating experience to say the least. A relic of a bygone era, it's three-episode structure comes apart at the seems when viewed in one sitting. Each episode features a different tone and director Michael Ferguson deserves a big thumbs up in style for trying to keep viewers on their toes with such tonal shifts, but unfortunately, the series hits its apex at the end of its second episode, and then drags itself feebly to a truly memorable, final five minutes.


Drawing on the ever-present Israeli-Palestinian conflict, "The Glory Boys" begins as a detective story, with British intelligence tasked with tracking down the surviving member of a terrorist hit squad, sent to assassinate a prominent Israeli nuclear scientist, David Sokarev (Rod Steiger). Ferguson makes sure events in the first episode unfold at an engaging pace, introducing Sokarev and the two Israeli special agents assigned to protect him, and an IRA operative, Cillian McCoy (Aaron Harris) put in charge of seeing that the surviving hit man gets his job done. Last but least, Anthony Perkins steps on the scene as Jimmy, an aging British spy called in as a last resort by his superiors who fear his roguish attitude and drinking problem. I would be a criminal not to mention Joanna Lumley as Jimmy's girlfriend, Helen, a fellow employee of the government. If Perkins' character sounds oddly familiar, it's because he's likely a sly nod to another, far more famous British spy with similar character traits. 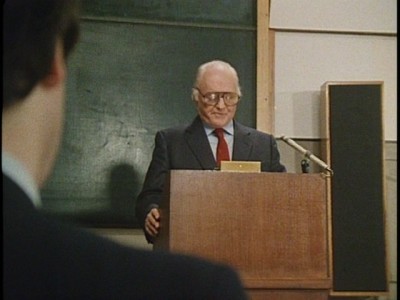 Perkins is truly fascinating to watch, if for nothing more than his character being the most dangerous person in the story. He knows his superiors don't care for him, so the only thing that matters is finding the assassins and killing them, so he can get back to his boozing. Ferguson wisely brings in Jimmy to amp up the feeling of the noose coming around the neck of McCoy and his inept partner, however, when he finally lets him loose in the final act, we learn why too much of a good thing can be bad. Perkins' performance wears thin hampered by shallow character development and a bland plot structure made up of a un-suspenseful standoff and rushed, rehashed manhunt. It's very unfortunate that "The Glory Boys" ends with such a whimper, considering it's second act is an A-level thriller.


Ferguson goes all out in the second act, like a general who carefully planned his attack and has all the players ready to strike. Aaron Harris turns in a thankless performance as McCoy, who actually garners a twinge of sympathy from viewers who see he's a man thrust into a political conflict he wants no part in, but is bound to, due to his own political convictions. Harris gives a low-key performance that is entirely believable but easily overshadowed by Steiger, who shines most brightly in the second act. To compare Steiger's performance here to his famous role in "The Heat of the Night" is to see a master at work; he captures the role of a scared commoner who is unfairly used as political pawn; his interactions with his wife, bodyguards, and eventually Jimmy, show a complex level of love, respect, and disgust. The only negative to Steiger's performance is a somewhat overcooked accent, but that's a minor quibble. 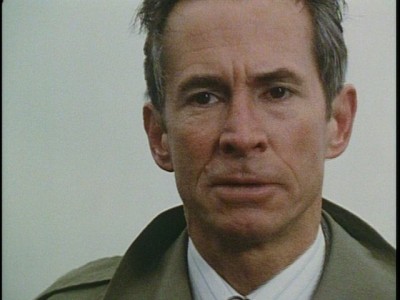 Ultimately, the fantastic two-thirds that set up the dismal conclusion to "The Glory Boys" aren't enough to elevate the overall quality of the production from merely above average. It just flat out runs out of steam, a victim of ambition and runtime; "The Glory Boys" is a spy thriller entirely dependent on making sure its characters are doing something to retain the interest of viewers, but fails to do so in its final act. This flaw is so critical because it undermines what was carefully built in the previous two acts, making viewers tire of some characters entirely. There exists a 104-minute edit, trimming approximately 35-minutes from the overall runtime; I could easily see the areas where the production could have been wrapped into a tighter package and I'd love to see that cut. However, the full cut here is all we get and while it will undoubtedly entertain you, it's not a completely fulfilling experience.


"The Contract" definitely lacks the star power of "The Glory Boys" but manages to maintain a consistent level of entertainment for all three of its episodes. Beginning with a bit of jaded, dark humor, "The Contract" throws egg on the face of British intelligence officers when they discover the East German defector, Willi Guttman, is not the prominent nuclear scientist they expected, but instead the son of the Willi Guttman (Hans Caninenberg) they were hoping for. As politicians tend to lack a good sense of humor, they attempt to turn things into a positive for themselves, even if it means using the poor boy as a political pawn. 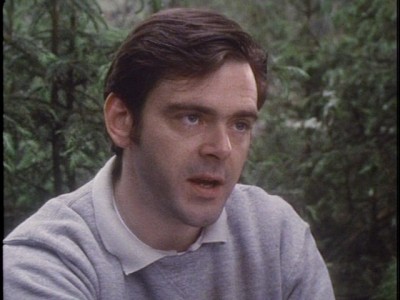 The themes of "The Contract" are very similar to those of "The Glory Boys" as both use the concept of citizens of importance to their countries being used as political tools. Whereas in "The Glory Boys" Sokarev was forced to risk public assassination in order to ensure the world doesn't view Israel as cowards, Professor Guttman is unwittingly pulled into a political mess in order to save his son and also question his own morality. Thrown into the mix is another British spy, looked upon with contempt. Filling the shoes here is Kevin McNally (looking much different than he does as Captain Jack Sparrow's trusted first mate, Joshamee Gibbs) as Johnny (Seymour isn't very clever with names) Donoghue. His task would appear simple: smuggle Guttman and his daughter, Erica across the border into West Germany. However, as one might expect when a family is being played against each other for political purposes, something might go wrong along the way. Unlike Michael Ferguson did in "The Glory Boys," director Ian Toynton keeps "The Contract" moving as a safe, evenly paced Cold War thriller. The program treads no unique ground, but is consistently entertaining, even if viewers are nowhere near the edge of their seat.


McNally isn't the most forceful leading man and often gets lost amongst the cast of minor characters that pop up along the way on both sides of the fence. This does have its advantages as Johnny has fallen out of favor with his superiors and the viewer gets the impression that the task given to him may be all he's really capable of. The characters that do fair better in terms of development are the elder Guttman and to a lesser extent his daughter and son. Seymour can be far from subtle in showing how "the good guys" callously use a family if for no other reason to try and save face amongst each other for helping a translator with no information defect. It is however a concept I can't recall any other spy thrillers exploring. Too often the genre focuses on the hero and their escapades, casting all others in their wake as disposable collateral. 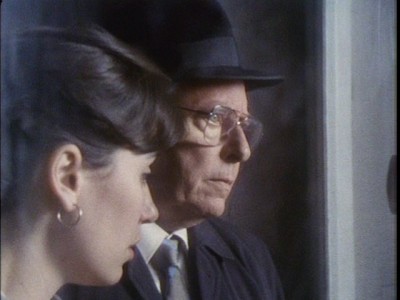 Toynton's steady approach to matters does wane as the series trudges along, and like "The Glory Boys" the flaws in the format show when all three episodes are tackled in one viewing. I could easily see the show feeling more tense between episodes with a week for viewers to stew about what happens next. As the story progresses and the burden of getting the Guttman's out alive falls solely on the skills of McNally, a viewer who has made any investment in the show will feel rewarded by the ultimate conclusion. Toynton does a good job of giving the production a cinematic look, which helps downplay the undercooked action. The use of German speaking actors including the Guttman's helps sell the reality of the miniseries, which aired on the heels of the fall of the Berlin Wall.


"The Contract" is serviceable and competent in nearly all categories. I never got the feeling like it was trying to be something it wasn't or couldn't be. The director delivered a product that showed he understood his limitations both in budget and acting; no one tries to steal the show. It's not a show most people would do a backflip over, but it's definitely something a spy fan could pull off the shelf for consistent entertainment.


The 1.33:1 original aspect ratio transfer is by all means sharper than any television broadcast, but still lacking. There is some noticeable minor print damage as well as noticeable video noise. The look of the film strongly suggests it was shot on video. Contrast levels are generally on the high side, most noticeably in a number of scenes set in broad daylight. Nighttime shots often end up being nearly devoid of detail due to abnormally low contrast, although it seems lighting levels were all over the place during production. Colors have a hint of washed out look to them, most apparent in skin tones. Detail is on the low side of the spectrum, but it is appreciated to have a so-so transfer devoid of digital tinkering, as opposed to the opposite, an artificially enhanced transfer that doesn't resemble the actual production.
VIDEO RATING: 2.0/5.0


The 1.33:1 original aspect ratio transfer is a little better in terms the condition of the print and contrast levels. Looking like it was shot on film, there is a healthy amount of grain present. Detail is nothing stellar and contrast levels still look a tad too high, although what appears to be a higher budget or at least a more skilled cinematographer gives the entire production a more cinematic appearance. Color levels are surprisingly stronger than one might expect, with the drab color palette of Cold War era Germany helping to sell the believability of the story.
VIDEO RATING: 3.0/5.0


The English stereo audio track is consistently average, featuring clear dialogue, well balanced, although unimpressive effects, and a score that shows some signs of age in terms of fidelity.
AUDIO RATING: 2.5/5.0


The English stereo audio track is serviceable but far from stellar. Interior dialogue is what one would expect from a 20-year old British television production, but on-location dialogue can be overshadowed by the environment and at times be a tad muddled. Effects range from passable to slightly tinny, most noticeable in any high action scene. The dated, but catchy score lies underneath it all, generally knowing it's place in building the mood.
AUDIO RATING: 2.0/5.0

"The Cold War Spy Collection" is far from a must purchase set. The two films have their share of faults, ranging from "The Glory Boys'" disastrous final act to the merely average in all aspects production of "The Contract." However, both are reasonable entries in the spy genre and a more grounded, realistic feeling approach to matters, when compared to popular figures like Jason Bourne or James Bond. The technical presentations leave a bit to be desired, but are far greater than and television or VHS broadcast could offer. Big of the genre or fans of Rod Steiger may want to consider a purchase, everyone else should be well served by a one-time viewing. Rent It.