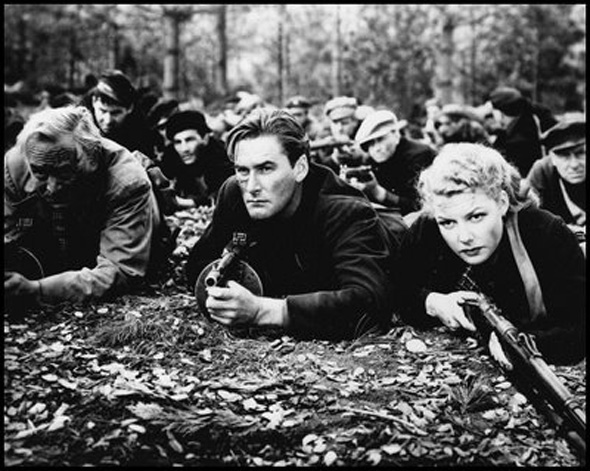 Turner Classic Movies and Warner Brothers have teamed up to issue a new edition of the TCM Spotlight series, this time a five-film set of WWII-era action pictures starring Errol Flynn. Although highly propagandistic on the surface, these films are quite entertaining and admirably made. Four out of the five are directed by the perennially unsung Raoul Walsh, a filmmaker of great force and economy who presaged the work of Don Siegel (who did the montages for a few of these pictures as well as Casablanca before coming into his own as a director). Walsh had an understated style but he knew how to capture complex movement and character interaction with a minimum of set-ups and cuts. His kind of talent was rare within the studio system, which forced directors to work cheap and fast, and Walsh's ability to create a fluid narrative within such constraints is enshrined here in this release just as effectively as Flynn's star power and unmatched charisma.

Desperate Journey (1942) is an enjoyable but by-the-numbers flag-waver co-starring none other than Ronald Reagan. Flynn and Reagan are two members of a bomber crew shot down over Germany and imprisoned. Of course they escape and save the day, but they grapple with Nazis galore along the way, including an evil officer, stiffly played by Raymond Massey.

This is wartime entertainment at its most phony and most entertaining. Reagan is terribly chipper and one can't help feeling that he's pleased as punch to be on the Warner Brothers lot instead of being shot at in Germany or the Pacific. Flynn is characteristically roguish, of course, and not terribly believable as the bomber's navigator. But there's some fun action here and it's all well-shot, incorporating some decent visual effects for the era.

Edge of Darkness (1943) is one of the more thoughtful films in the set. Strongly - and oddly - echoing John Steinbeck's novel The Moon is Down (published the prior year), the story takes place in a Norwegian fishing village recently occupied by Nazis, but is purportedly based on a different novel, by William Woods. Most of the town's citizenry oppose the Germans' presence, even planning armed resistance. But those who wish to fight back are afraid of quislings in their midst who could turn traitor. Flynn plays one of the leaders of the secret movement, working alongside characters played by Judith Anderson and Ann Sheridan. The story portrays some interesting shades of gray in the form of characters with divided, or at least uncertain, loyalties, such as the town doctor, played by Walter Huston. Although the film's conclusion isn't exactly unconventional, the plot moves in some unexpected ways, thanks to complex characterizations and performances.

It's the only non-Walsh picture in the set. Director Lewis Milestone oversees some great sets, including a lovely miniature fjord used in wide shots. The climactic battle is energetically shot and edited. Flynn is not as front-and-center in Edge of Darkness as a star of his caliber would normally be. The movie is a genuine ensemble piece, with solid work by Huston, Anderson, and Sheridan. Sheridan in particular is strikingly forceful and aggressive as Flynn's compatriot and love interest. The only misstep in the acting department is Roman Bohnen as shopkeeper Lars Malken. Malken is a coward, but the role is over-written, and Bohnen's chattiness renders this tragic character simply annoying. Overall, however, Edge of Darkness takes its subject matter seriously, and while a tad overlong, it's probably the most thematically engaged film in this set.

Northern Pursuit (1943) places us firmly back in B-picture territory. This action thriller begins with a well-staged sequence that shows a German U-boat "dropping off" a group of spies in the Great White North. Flynn is an officer of the Royal Canadian Mounted Police who becomes suspected of collusion with the Nazis, and must escape to the far north in order to capture the spies and prove his patriotism. It's a silly story on the surface made more plausible by Walsh's taut direction and a decent screenplay by Frank Gruber and Alvah Bessie (Bessie is also responsible for the scenario of Objective, Burma! - see below).

One of Walsh's strengths is creating an immersive mise-en-scène out of limited backlot resources, a talent that is in bold evidence here. Although snowflakes fall too drily from the shoulders of our icebound characters, the cabins, sled dogs, trees, and wide shots are right in the details, and it all works together to create a credible version of Canada's northern wilds. Tension is high throughout, helped by good supporting work from Helmut Dantine - who also plays a key role in Edge of Darkness - as the lead German spy. He has a thin-lipped reptilian quality and a command of the Nazis' cold, bureaucratic outlook. Northern Pursuit also features a number of small surprises for those of us overly-familiar with genre conventions, including a implausibly crackerjack ending that involves the assembling of a bomber out of parts stored in wooden crates.

Uncertain Glory (1944) stars Flynn in one of his more unlikely roles. Here he plays a French murderer, posing as a resistance leader in order to prevent anti-resistance retaliation by the Vichy government. His chief ally is a detective played by Paul Lukas, whose Hungarian accent is as inappropriate as Flynn's Australian one. While the outcome is hardly unorthodox, the picture is never exactly by-the-numbers, either.

As in Edge of Darkness, some interesting questions of national and philosophical allegiance are raised in ways that suggest some surprisingly gray areas - especially in view of the jingoistic wartime environment in which this film was produced. It's another fun thriller from Walsh, who creates a treacherous atmosphere and strong visuals, including good use of miniatures and stock footage.

Objective, Burma! (1945) is the longest and most well-known picture in the set. It's also the only one previously-released on DVD. Here, Flynn leads an ensemble cast as Captain Nelson, who takes a group of paratroopers into Burma to destroy a Japanese radar location. The team's mission is swift and successful, but getting out of Burma proves a far bigger challenge.

The movie is a sort of "military procedural," depicting operations with what would appear to be an unusual, almost forensic level of detail. Objective, Burma!, despite its sense of authenticity and other qualities as a well-made film, is not as reliable as one would like to believe. It was famously decried - and banned - by Winston Churchill for fictionalizing a British operation as a largely American one, a matter discussed in the commentary track. But it's still a highly entertaining adventure that avoids overly romanticizing combat and instead puts the audience in the middle of the operation - which is mostly achieved by way of the character Williams (Henry Hull), a reporter on the mission and our conduit for information about the way the military works. Walsh's direction was never more assured or skillful; he uses much more camera movement and cutting here, to convey action and build suspense.

Each film is presented on its own disc. The five discs are housed in a nice fold-out digipak, which fits into a slipcase. It's the same design scheme used on the four-disc Ben-Hur release, among others.

Image
The full-screen transfers are uniformly excellent. All films are black-and-white and show excellent contrast and shadow detail. These films were either well-preserved or given a fairly detailed restoration. Some of the stock footage shows more age, but that's likely because it was already beat-up at the time of these films' production. Warner Brothers maintains their high reputation for presenting classic library titles in exemplary transfers.

Sound
These mono tracks are unflashy but very clear. Balance is consistently thoughtful. Dialogue is always up front with the expressive music Steiner, Waxman, and Deutsch woven evenly into the mix.

Bonus Content
In a very welcome move that hearkens back to their "golden age" of releasing library titles that oozed with extras, Warner Brothers has brought back the Warner Night at the Movies feature. Viewers have the option of playing each film as it would have been shown upon its original theatrical release - preceded by newsreels, cartoons, and live-action shorts. Each of the five films in this set comes with its own selection of Night at the Movies material:

Objective, Burma! (24:50 total): Newsreel, So You Think You're Allergic with Joe McDoakes, cartoon A Tale of Two Mice, and trailers.

This robust and highly entertaining group of thrillers starring Errol Flynn is a miniature lesson in film history and an indirect tribute to the directorial skill of Raoul Walsh. At a time of enormously overwrought "patriotism" in American film, these films by Walsh - and Edge of Darkness, directed by Lewis Milestone - asks more searching questions about what loyalty should really be about. Fine transfers and good extra features make this well worth a purchase. Highly Recommended.