Clichéd and utterly predictable, but still...a solid-enough yarn for soap fans. Acorn Media has released We'll Meet Again, the single-season British television series from 1982 that tells the story of Market Wetherby, a small East Anglia village suddenly "invaded" by American military forces in 1943. Starring Susannah York, Ronald Hines, Michael J. Shannon, June Barry, and Ray Smith among the large ensemble cast, We'll Meet Again never meets a stereotype it doesn't like, and telegraphs all its melodramatic plotlines hours in advance, while offering nothing new in terms of exploring the cultural clashes that occurred when the Yanks set up housekeeping all over England during the final years of World War II. However, those viewers who can't get enough of television from over the pond--particularly those stories that deal with one of British TV's favorite subjects, WWII--will find a comfortable nostalgia in We'll Meet Again's themes and execution. But that's all. 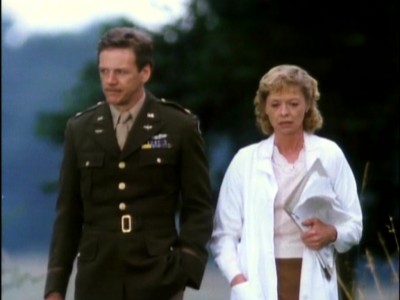 Suffolk, England, in April of 1943. As the village's shops open and the citizens of Market Wetherby begin the business again of getting through another day under the threat of war, the sudden, unannounced arrival of American Air Force personnel is met with a wide range of emotions by the locals, from curiosity to jealousy to open hostility. Even-tempered bar owner (The Plough) Jack Blair (Patrick O'Connell), will no doubt welcome the Americans who are not only fighting for his country's freedom, but bringing plenty of military script to buy up his liquor, as well. His two daughters' reactions couldn't be more different from each other's: lush, almost slutty brunette Rosie (Lynne Pearson) can't wait to string along as many wealthy G.I.s as she possibly can, while quiet, pretty blonde Vi (Kathryn Pogson) is reluctant to encourage any of the brash soldiers in conversation. Next-door-neighbor--and rival of Jack's--Albert Mundy (Ray Smith), a blustering, controlling grocery store owner, is even more harsh in his assessment of the Yanks: he hates them almost as much as he seems to disdain his own family. His attractive wife Vera (June Barry) has long-since resigned herself to her husband's anger, while naïve daughter Letty (Natalie Ogle) and sensitive son Peter (Patrick Pearson) keep as much distance from their father as possible. Separated by class distinctions and "breeding," village bigwigs Major Ronald Dereham (Ronald Hines) and his beautiful wife, Dr. Helen Dereham (Susannah York), can afford to be more circumspect in their cautious disapproval of the uncouth, rowdy American G.I.s.

And what a group of flyboys they are, too. Among the enlisted men and non-coms who make up the 525 Bomber Group of the 8th Air Force, cuddly harmonica-playing Sergeant Elmer Jones (James Saxon), wise-cracking Sergeant Hymie Stutz (Lou Hirsch), and New Yawk hustler Sergeant Mario Bottone (David Baxt) are the most noticeable trouble makers, always "on the make" for a willing date whenever they can scrounge up a Saturday night pass into town. Elmer and Hymie become embroiled in a playful game of one-upmanship trying to score with the flirty, flighty Rosie, while Mario will soon become involved with the troubled Letty...when he has time away from his black market activities with Letty's shifty Uncle Sid (Stuart Wilson). Sensitive Master Sergeant Chuck Ericson (Joris Stuyck) saves quiet Vi's life during a strafing run, and they soon fall in love, while iron-jawed, first-rate mechanic Master Sergeant Joe "Mac" McGraw (Christopher Malcolm) finds solace with lonely housewife Sally Bilton (Carolyn Pickles) and her two small children...while her husband Stan (David Sadgrove) is away fighting on the continent and her hateful mother-in-law Ruby (Julia McCarthy), looks on with contempt. Capt. "Red" Berwash (Gavan O'Herlihy) keeps things simple--available women and no sentimentality when he loses one of his men--while base commander Major Jim Kiley (Michael Shannon) has the dicey, diplomatic responsibility of not only maintaining civil discourse between his rambunctious men and the disapproving, staid village, but also his warrior's duty to send his men to almost certain death with the punishing, ruinous bombing runs that must be made from the Wetherby base, day after day. Add to that the fact that adversaries Major Kiley and Dr. Dereham become...closer, and the pressures that drive both of these professionals become infinitely more complex under the weight of the war's cruel fates. 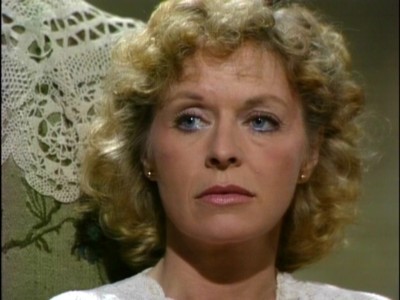 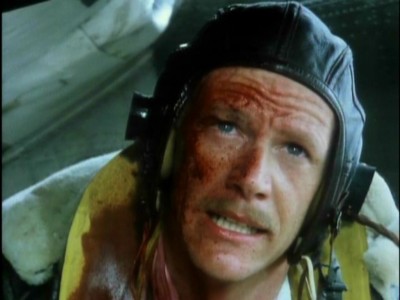 You're savvy TV watchers out there--I'll bet there's not one of you (among the seven people actually reading this review) that couldn't predict, just from my brief synopsis above, where all of those subplots were going to wind up at the end of We'll Meet Again. And that's We'll Meet Again's biggest drawback...and ironically, probably it's only minor point of interest: it's entirely predictable. "Predictable" won't win any awards from someone expecting an original drama that challenges them, but "predictable" is good enough if you're looking to wile away some time in front of the tube. Certainly, there's an agreeable comfort level in watching a long story unfold when you already know exactly where it's going...provided it's a good story to begin with, of course. And We'll Meet Again is interesting the way a cheap novel that flogs hoary old chestnuts of character and situation keeps you turning the page to see if all your predictions about the book's outcome are proven true. That's where We'll Meet Again works best (or at least works), when it gathers together a compendium of stock situations and characters from countless other films and novels about WWII, and presents them again in an agreeably-paced soap opera. Created and co-written by David Butler, We'll Meet Again may have consciously strove to re-create a romanticized, nostalgic war-time atmosphere reminiscent of older, better WWII dramas like Waterloo Bridge or D-Day: The Sixth of June, and to a degree, it succeeds in reminding us of all the other films we've seen on that subject...but that's not much of a compliment for a drama that may also have had serious ideas on its mind.

Anyone looking to We'll Meet Again for historical accuracy should know right up front that this soap opera isn't for you. Unlike say, Foyle's War, which makes a conscious effort to get the details of homefront England during WWII scrupulously right, a lot of what is shown here seems fishy at best...and if those details are true, they're presented in such a fumbling way that we suspect they're phoney. I thought there was going to be trouble with We'll Meet Again right at the beginning, during the opening scene, where the English villagers pick up knives in a menacing fashion when they first see G.I. Joe roll into town on his Jeep. Did that really happen in English villages during the war? Was their enmity for American soldiers so great and unthinking at the very first sight of them? If it was that way during the war, couldn't We'll Meet Again have laid down a little context to explain that extreme reaction? Luckily, as the film progressed, "movie sequence short hand" took over, as I was treated to recycled moments from a myriad other war movies. And with that pap, my concern over the series' fidelity to the truth, evaporated. Did the filmmakers really have rebel Red buzz the field on his first arrival, something right out of Abbott & Costello's Keep 'Em Flying and countless other Air Force films? Did they deliberately set out to make Major Ronnie's billboarding speech about the Yanks destroying the English way of life seem so stiff, with his bromide delivered straightfaced (and hilariously) right into the camera? And what about the cross-cutting between Letty celebrating her pregnancy and her lover's bombing raid, giving even the most movie memory-bereft viewer out there a signpost that declared somebody was going to die...and it ain't gonna be Letty (at the end of the film, they go one step further with this character's nonsense, having her wander around the woods at night, in a thunderstorm no less, like Ophelia looking for the nearest fishing hole). All of this and more plays on like a half-remembered dream because we've seen it all so many times before, in other, better films. 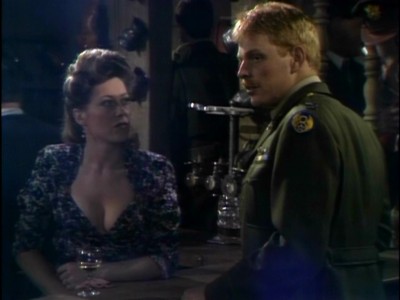 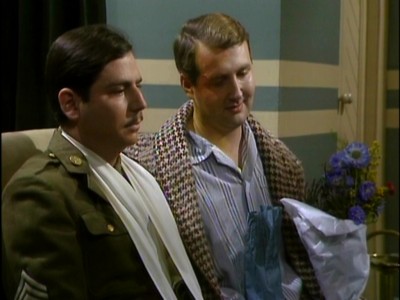 And the same goes for the characters here in We'll Meet Again. I can't say I was surprised when the invading Yanks were basically portrayed as baboons with poor grammar and chronic erections (that's the usual stereotype for these types of films), until we're introduced to the other G.I.s like Chuck and Major Kylie, helping everyone in Market Wetherby to realize they haven't been overrun by refugees from a Bowery Boys movie. Nor was I disappointed to see that the English characters, true to form, fell along thoroughly conventional lines, as well--particularly Dr. Dereham, who's outwardly chilly and remote (and yet passionate and fiery at the touch of her rough-and-tumble American lover), and her insufferably noble, humble, self-sacrificing husband, who's so self-effacing that he willingly lets his wife commit adultery, apparently, so as not to have a loud argument about it. What unique, novel, imaginative English toffey-nosed twits these two character are! I've never seen their like before in a film. Add to them the hustling New York con man, the small-minded English shop keeper, the square-jawed, good-guy mechanic, the romantic, mysterious Captain of the squadron, the timid English rose, the sultry English rose, and so on and so on, and you haven't got one original character, with even one distinctive feature or quirk or twist or anything resembling a complexity of human emotion outside established melodramatic conventions, in the bunch. That's quite an accomplishment, and it's a loss for anyone looking for something inventive here in We'll Meet Again. However, as the episodes pile up, it becomes apparent that the series isn't really reaching for "serious drama," but rather middle-brow soap, and to that end, it works, because we already know the players and the set-ups, and we merely have to watch them go through their paces. It doesn't even matter that the series ends on an unresolved note (apparently, no one was interested in a second "series" for the show); we can fill in the blanks well enough for what happens to Major Jim and Dr. Helen, because we've seen them, and their story, countless times before. 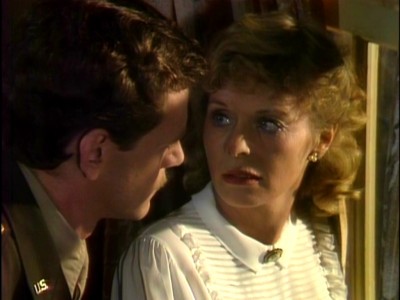 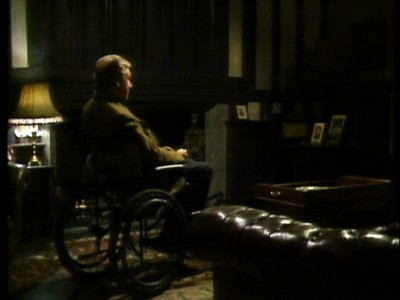 The Video:
The full-screen, 1.33:1 video transfer for the video-shot (for the interiors, which dominate the screen time) is about what you'd expect for British television at that time: muddy colors and a soft image. Anyone who has watched British telly from that time period will recognize that look right off the bat.

The Audio:
The Dolby Digital English mono audio track is awful at times (most probably from the original recordings, not the transfer), with squelchy, screeching levels that then bury themselves down in the mud. Too bad subtitles or close-captions weren't available--they would have helped.

The Extras:
Text filmographies for some of the major cast members are it.

Final Thoughts:
Old-as-the-hills and twice as familiar back in '82, and none the better for wear in 2010, We'll Meet Again should have been titled, I've Already Met You...Over and Over Again. Stock situations and clichéd characters (or vice versa, if you please) add nothing to this facile look at the clash between staid villagers and horny, rowdy G.I.s in WWII England. However...a long-form narrative with some rudimentary movement (no matter how quickly we've sussed-out its intentions) can still cater to our basic need to have a story told to us, and on that elementary level, We'll Meet Again works well enough as a rental for devoted British TV fans.