Shout Factory // Unrated // April 13, 2010
List Price: $15.98 [Buy now and save at Amazon]
Review by Stuart Galbraith IV | posted April 23, 2010 | E-mail the Author
Essentially a greatest hits CD featuring a fully loaded DVD of extra features, The Tom Lehrer Collection is for its distributor, Shout! Factory, a shrewd way to repackage somewhat overly-familiar material while, in this case especially, providing fans of this irreplaceable satirist the chance to see him perform live.

It's all packed into a standard CD jewel case, which presents some filing problems - Where to put it? 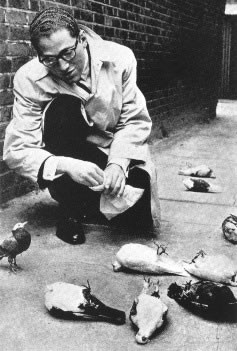 (Lehrer, poisoning pigeons in the park)

A unique talent, Tom Lehrer (b. 1928) reportedly has written a mere 37 songs over the years; some of these date back to the early-1950s which he composed them as a lark to perform at dinner parties. But rather than a career in show business, Lehrer was drawn into the world of mathematics: he was awarded a B.A. from Harvard when he was just 19, and after more studies there and a stint in the army he taught at MIT and, later, the University of California, Santa Cruz.

While at Harvard, Lehrer began performing in nightclubs in the Boston area, and in a single one-hour session in 1953, and at his own expense, Lehrer recorded his first album, Songs by Tom Lehrer. His popularity grew steadily, on college campus throughout America, mostly through word-of-mouth, and abroad where his biting political and social satire was allowed on the radio.

It's hard to describe his appeal: partly it has to do with his acidic cynicism about various treasured institutions, always in sublimely clever lyrics couched in light-hearted melodies. He draws inspiration from musical theater of earlier in the century, including British musical hall songs. He was greatly influenced by Gilbert & Sullivan (one famous song, nothing more or less than a listing of the chemical elements, uses the melody from the "Major-General's Song" from Pirates of Penzance) and later by the equally complex Stephen Sondheim. Not surprisingly, many of his songs are almost like little puzzles ("I Hold Your Hand in Mine," "I Got it from Agnes," "New Math"), others veering into the darker crevices of the American middle class ("My Home Town").

Eventually Lehrer stopped performing - he simply tired of it though an urban legend claimed Lehrer said awarding the Nobel Prize to Henry Kissinger (in 1973) made political satire obsolete. He has been coaxed back before audiences only a few times in the decades since, memorably at a 1998 tribute to impresario Cameron Macintosh, where he was introduced by Sondheim, his musical idol.

4. When You Are Old And Gray

7. We Will All Go Together When We Go

25. Poisoning Pigeons In The Park

The DVD, with less familiar material, includes a 1967 concert preserved on black and white videotape. It consists of 12 songs: "National Brotherhood Week," "When You Are Old and Gray," "MLF Lullaby," "Poisoning Pigeons in the Park," "So Long Mom (A Song for World War III)," "Pollution," "The Masochism Tango," "Send the Marines," "Who's Next?" "Werner von Braun," "The Vatican Rag," and "We Will All Go Together When We Go." For those of us who've enjoyed Lehrer's songs for years but never had the chance to see him perform before a live audience, this is a special treat.

Also included are Lehrer's rare later performances: Singing "I Got it from Agnes" on the BBC's Michael Parkinson Show in 1980, and "Poisoning Pigeons in the Park" at the Macintosh tribute in 1998. Four songs Lehrer wrote and performed over animation for The Electric Company in the 1970s are included along with two songs performed in 1997 at the Mathematical Sciences Research Institute in Berkeley.

The clips and videotaped concert all look fine. The 1998 performance is 16:9 enhanced widescreen. The material from The Electric Company is in rougher shape, but on par with "classic" Sesame Street and other PBS programming from that era. There are no Extra Features, unless you consider the DVD to be a supplement to the CD, or perhaps the other way around. Lehrer himself talks about each track on the CD and DVD in the 15-page booklet/liner notes.

For Tom Lehrer fans this is a very good deal: for the price of a CD you get an entire preserved performance of some of his greatest hits, and some wonderful additional material besides. Highly Recommended.