Lionsgate Home Entertainment // R // July 27, 2010
List Price: $19.99 [Buy now and save at Amazon]
Review by Stuart Galbraith IV | posted July 22, 2010 | E-mail the Author
In Variety-ese, Lock Up (1989) is a clichéd prison "meller" unapologetically aiming to please fans of its star, Sylvester Stallone, and in that sense hits all the right buttons. Mostly a fusing of The Longest Yard (1974) and Escape from Alcatraz (1977), earlier and superior Burt Reynolds and Clint Eastwood vehicles, respectively, Lock Up is slickly made with some enjoyable performances but in the end the film is so fundamentally, outrageously unbelievable that it generates more unintended laughs than intended thrills.

A Carolco production, Lock Up was originally distributed by TriStar Pictures but instead of coming to home video via Sony (which owns most of the TriStar library) this region "A" & "B" encoded Blu-ray is on the Lionsgate label, via Studio Canal. The transfer is superb; it doesn't look like a 21-year-old movie at all, and included are some extras left over from the 2007 DVD release. 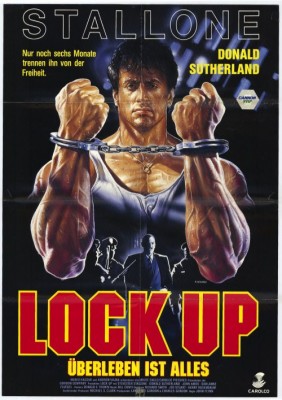 The film opens rather cleverly, with Frank Leone (Stallone) on the verge of starting his own modest auto repair business, spending an idyllic weekend with fiancée Melissa (Darlanne Fluegel). However, when the weekend's over, Frank reports back to "work." Turns out he's a model prisoner at a minimum-security, "country club"-type correctional facility. Seems he killed the punk who murdered his fatherly mentor after corrupt cops refused to step in.

But Frank's plans to coast through the last six months of his sentence abruptly go awry. In the middle of night he's inexplicably transferred to Gateway Prison: a medieval dungeon of a place with the worst aspects of Attica, Alcatraz, and Devil's Island rolled into one.

In absurdly convenient exposition, a backstory that had me wondering if I was actually watching a sequel to some earlier movie, it turns out that Gateway's warden, Drumgoole (Donald Sutherland), holds a grudge against Frank because he was the only prisoner ever to escape from Treadmore, another prison then under Drumgoole's supervision. The vindictive warden is determined to "break" Frank, hoping to goad him into yet another escape attempt certain to add considerably to his sentence and perhaps keep Frank incarcerated indefinitely.

Despite frequent beatings and other abuses (he's almost asphyxiated in a "delousing" chamber), Frank is determined to quietly serve the rest of his time while staying out of trouble. He eventually falls in with some of the other inmates, including talkative Dallas (Tom Sizemore), the poor man's Louis Dega (of Papillon fame); burly, cynical lifer Eclipse (Frank McRae), who runs the prison's auto repair shop; and neophyte convict "First Base" (Larry Romano), recently sentenced to life. Somehow, the foursome is allowed - unsupervised - to completely restore a classic Ford Mustang. (How did they get parts?) In a scene more appropriate to a Julia Roberts romantic comedy than a prison picture, the foursome dance around the car while The Ides of March's song "Vehicle" blares away on the soundtrack, and like schoolgirls they giggle with delight playfully spray-painting one another. Meanwhile, Warden Drumgoole lurks ominously in the shadows. Think he's going to let the inmates enjoy that car?

In an earlier scene, Warden Drumgoole - whose name suggests a character in a W.C. Fields comedy - gives Frank a private tour of the prison's disused execution chamber. There, the evil warden has himself lovingly restored something: the prison's original electric chair. He's also apparently reconnected it to the main power generator. What are the odds Drumgoole's going to end up strapped to that chair before the film is over?

Though in some ways cheesily enjoyable, Lock Up is so utterly lacking in credibility that at times it seems to be taking place in an alternate, comic-book universe. Drumgoole runs his prison like Josef Mengele, but except for Captain Meissner (eventually) and another guard (William Allen Young), no one seems to mind all the flagrant human rights abuses. (Drumgoole has prisoners murdered though not Frank, much as he despises him.) Frank and the other prisoners seem to have no access at all to lawyers, loved ones, the Red Cross or anyone else; the prisoners at Gitmo had more contact with the outside world. In one scene, completely out of the blue, Frank is promised a 30-minute conjugal visit with Melissa. (As reader Sergei Hasenecz points out, "A conjugal visit with a girlfriend? Not likely.") Bizarrely, after all the incessant abuse, Frank actually seems surprised when Drumgoole orders the visit cut short, just minutes after Melissa arrives.

After the moderately grainy opening titles, Lock Up pops into impressively crystalline clarity, it's 1080p, 1.85:1 (spherical Panavision) transfer nearly faultless. Were it not for all the late '80s hairdos it might easily be mistaken for a brand-new movie. The English 5.1 DTS-HD Master Audio is also impressive, adapted from the original Dolby Stereo mix; a French 2.0 DTS-HD Master Audio and Spanish mono track are included, along with optional subtitles in all three languages.

I was also impressed to see that the disc includes both audio and video calibration features, the former reminiscent of the old Chase system that used to accompany laserdiscs whose audio they mixed.

All carryovers from the March 2007 DVD release, supplements include the usual "making of," star profile, and behind-the-scenes featurettes, along with an original trailer, all of which is presented in standard definition.

Though critics were a bit too harsh on what is, after all, by design an undemanding Sylvester Stallone vehicle, Lock Up lacks any credibility and is impossible to take seriously, though the transfer is excellent and for contemporary action fans it's a title worth seeing once. Rent It.