Olive Films // Unrated // July 27, 2010
List Price: $24.95 [Buy now and save at Amazon]
Review by Stuart Galbraith IV | posted July 20, 2010 | E-mail the Author
Though the type of film that could've been even better if they had only done this or that, Union Station (1950) is a noir notable for its ruthlessness, with the kind of violent cops James Ellroy would later write about, and an especially sadistic central villain. The film reunited two of the stars of Billy Wilder's Sunset Boulevard, William Holden and Nancy Olson, but they're both somewhat wasted, lost in what's predominantly a police procedural.

Still, it's a gritty, atypically nasty film with much to recommend it, the kind of underrated picture the new independent DVD label Olive Films, sublicensing from Paramount, seems determined to release. There are no extra features but the transfer, while not perfect, is more than adequate. 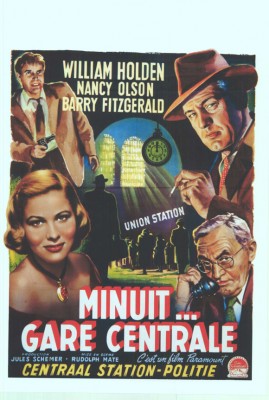 Joyce Willecombe (Olson) is commuting back into the city when she sees two suspicious men (Lyle Bettger and Don Dunning) racing to the station in a car. As they board her train separately, she catches sight of a concealed pistol on one man (Bettger's). She informs the conductor, who wires ahead to the Union Station police*. There, Willecombe is met by Lt. William "Willy" Calhoun (Holden) and points the men out.

The screenplay by Sidney Boehm (The Big Heat, When Worlds Collide) is clumsy, with some painfully obvious foreshadowing about charging into danger without back-up, which unsurprisingly is exactly what Holden's character does at the climax. Olson's presence throughout the story, always in the midst of things, also doesn't make much sense and even less plausibly she tails suspects and catches important details Calhoun's army of cops keep missing, which in turn makes them seem almost inept. Finally, there's a superfluous hint of romance between Calhoun and Joyce the film really doesn't need.

However, in other ways Union Station is interesting and memorable. In those pre-Miranda warning days big city police could be virtually indistinguishable from the lawbreakers they were chasing, and in Union Station the force supervised by Calhoun and veteran Irish Inspector Donnelly (Barry Fitzgerald) take it right up to the edge.

When, thanks to Joyce's crackerjack tailing the cops nab Vince (Fred Graff), one of Beacom's co-conspirators, Calhoun ominously instructs his men to "take him down to the train shed." Once there, they believably threaten to throw him under an inbound locomotive, and though there's at least a hint the cops are bluffing, it's pretty ambiguous and they're clearly not averse to beating their suspect.

Of course, Beacom is so reprehensible as to seemingly justify anything it takes to rescue the blind girl. Unblinking like Hannibal Lecter, grinning like a maniacal, animated skull at the pleasure he derives from striking and threatening the girl, in one scene Beacom takes delight it pressing her within an inch or so of high-tension electrical wires. When Beacom's girl (Jan Sterling) meekly asks if he'll release Lorna after the ransom is paid, he replies, "She'll go home - if they can ever fish her out of the river."

The film makes extensive use of the real Union Station in downtown Los Angeles, which cinematographer-turned-director Rudolph Maté and the film's DP, Daniel L. Fapp, light pretty well, considering. There's also an interesting chase aboard an elevated train -apparently a jumble of local footage combined with second unit work in Chicago and/or New York - that anticipates the more famous one in William Friedkin's The French Connection (1971).

Presented in its original full-frame aspect ratio, Union Station looks okay if nothing special, like an older but adequate video master. The mono audio, with no alternate language options or subtitles, is likewise okay and the disc is Region 1 encoded. There are no Extra Features.

Though not as good as it might have been, Union Station is memorably nasty with atmospheric location photography and buttressed by a fine cast. Recommended.

* Thomas Walsh's Edgar-winning novel from which this was based was called Nightmare in Manhattan. The movie version vaguely but not definitively shifts the locale to Chicago's Union Station, as the depicted city has elevated trains and expansive stockyards though the generic license plates on cars don't identify which state they're from. Most of the location work was done in and around Union Station in downtown Los Angeles, however, and palm trees are visible in some shots.