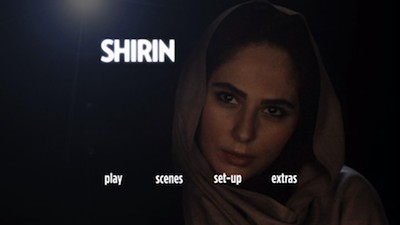 Iranian auteur Abbas Kiarostami has always been a filmmaker fascinated by the boundaries between cinema and the reality of its audience. His 1991 film Close-Up used the real-life case of a man who conned people into believing he was a famous director and got all those involved in the actual event to make a fake documentary about it, and 1997's A Taste of Cherry ended by lifting the curtain on its main character's existential crisis and reminding us that it's all just moviemaking. The 2008 motion picture Shirin takes these experiments further by removing traditional presentation methods and showing the audience a version of themselves. This is a movie where you, as a filmgoer, watch other filmgoers watch a movie.

Kiarostami has gathered 115 actresses and shot 90 minutes of them watching a non-existent movie. As the invented film's narrative plays out for them, the director moves from face to face, recording their reactions, silently observing their private interaction with cinema. And that's it.

The movie these women are watching is based on a 12th-century Persian poem. We never see a frame of it, but we hear the whole thing though dialogue, sound effects, music, and even a couple of songs. It's the tale of a prince and a princess, Khosrow and Shirin, who are fated to be together. A stonemaker named Farhad has carved portraits of both of them, and wherever they go, the images follow, until they finally meet. This star-crossed pair has too many stars crossed, however, and Khosrow's eye strays and he marries another for political reasons. Shirin is also repulsed by his warmongering, and is instead drawn to Farhad. It's a story with romance, violence, philosophy, history, and betrayal. It's also a tale about men and women, and how different they can be. 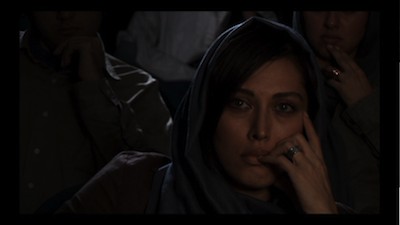 The unseen film isn't so much a backdrop for the film Kiarostami did make as it is the river that funnels into his larger cinematic ocean. His camera moves methodically through the audience, lingering on the many faces, taking its time with each one. Repeats of the same actress do occur, but there are long separations between them. The woman chosen is always center of the frame and by herself, though we do see people sitting behind her. There are men in the audience, but they are never front and center, and they mostly seem bored by the movie. As Kiarostami asks us to interpret the reactions of the women, we can also interpret that the effect the story has on them is decidedly feminine. The story of Shirin is their story, and they share the same desires, passions, and pain as this woman who lived nine centuries prior. In much the same way that the men in Shirin's life were blind to the harsh consequences of the violence they waged, so too are the men in this movie theatre cold to the soul of Shirin's story.

It's amazing how a plotless movie like this moves. Shirin never feels long. The images are constantly changing, and the brain ends up processing it on two different levels. Maybe it's the absence of traditional story points that makes it seem timeless. We don't see the hands of the clock turning because there are no predictable markers. Where is the third-act structure in Shirin? How can we know which face will be the last face? The most we can do is try to keep track in case we see someone more than once. Apparently, these women are all famous in Iran, so it might be different for Iranians; the only face I recognized was Juliette Binoche, and it took me seeing her more than once, she's not immediately obvious. Likewise, a better knowledge of Iran's history could add further depth to your viewing of Shirin.

In addition to the complicated fabric of what the movie is about, it seems to me that Kiarostami is portraying an inherent irony of the moviegoing experience. For as much as we can all sit in the same place and watch a movie together and react to it in the same ways, the act of watching is solitary. He is showing us something very private. These women are letting their emotions show without any expectation that they are being watched. Sure, it's a staged reaction, but as with all fiction, we are asked to forget that--and for all we know, maybe they are reacting to the tale of Shirin, Kiarostami could have been showing them a version of the story when he was directing them on set. As the final component of this experiment, we end up reacting to how their version of Shirin moves them, and if we respond with the same emotion, are we not then also moved by this non-existent motion picture? We are all united across time and fictional boundaries.

Which also takes us back to Shirin herself. In the movie, she tells her story to her "sisters" as a cautionary tale. It begins with Khosrow's death, and so we know that this is a tragedy, it is not a fairy tale where love conquers all. Death, here, is inevitable. Yet, as the ones who see this, maybe the women had a chance to do something about it. Maybe if we stopped being solitary and realized that the person to our left and the person to our right felt the same way as we do, the inevitable need not happen. By dismantling the screen, Kiarostami is reminding us that we are all in this together. 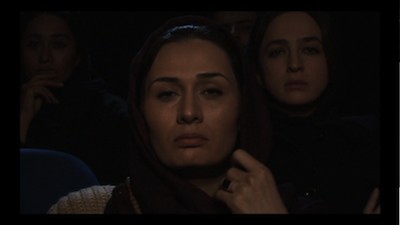 Video:
The 16:9 anamorphic transfer on Shirin is very good. There are nice colors, including realistically rendered skin tones, and the play of light from the movie screen adds nuance to the emotions Kiarostami is attempting to show. Some of the shadows were inconsistent and spotty, but that also had to do with the uncommon light source.

Sound:
The original Farsi soundtrack is mixed in Dolby Stereo and is very strong. Though there aren't a lot of effects, the volume and the balance adds to the impact of what we are hearing, which also has a direct impact on how we interpret what we are seeing.

The English subtitles are good, evoking the power of the unseen story while not distracting too much from the all-important faces.

Extras:
Cinema Guild has put together a full package for the release of Shirin, starting with an interior booklet with liner notes by Kiarostami-expert Jonathan Rosenbaum. 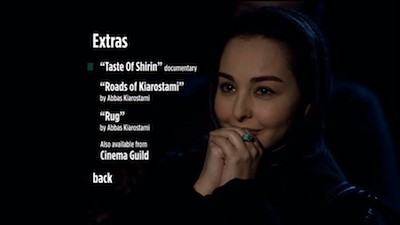 Taste of Shirin (28 minutes) is a making-of featurette that takes us down on the set while Shirin is being put together. In this doc, we see how Abbas Kiarostami sets the scene for his actresses, including what he shows them and what he asks them for, to lead them toward what he hopes to capture on film. The final ten minutes or so switches gears to show us the recording sessions for the illusory film within the film.

Kiarostami's 2005 short film Roads of Kiarostami (32 minutes) is a collection of still photos and filmed pieces of roadways, with narration by the director as he explains his fascination with roads and their poetic and existential significance. He also climbs out of his vehicle at one point to take pictures of nature. Roads is in black-and-white and features a soundtrack of classical music.

The 2006 piece Rug (6 minutes) feels more connected to Shirin. Kiarostami lays a soundtrack of dialogue between a man and a woman over footage of traditional rugs, with the images of the rugs dictating the narrative direction of the voiceover. The story is in a similar vein as the story of Shirin, and the images resemble the folk art used under the opening credits of the longer movie.

Finally, there is a collection of trailers from Cinema Guild.

FINAL THOUGHTS:
Highly Recommended. Shirin is a bit of a tough call in terms of recommending it to others. As I was starting my review, I was telling a friend about the movie, and after her initial baffled reaction to the concept, she asked if it was any good. I said I thought so, but at the same time, I could only think of a couple of people whom I knew would like it unquestionably. It's the kind of thing that, if it sounds interesting to you, then you will probably like it; if, on the other hand, it sounds like a horribly pretentious idea, I doubt you'll ever get into it. I actually didn't know what it was about beforehand, I watched it because I like Abbas Kiarostami, and I was blown away. The extras on the disc only add to the fascination. The Shirin DVD is an excellent, complete package.