Batman: The Brave and the Bold - Season One, Part One 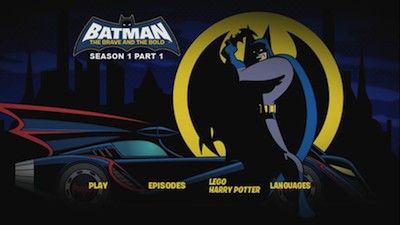 The very first episode of Batman: The Brave and the Bold - Season One, Part One opens with Batman and Green Arrow, in his original Robin Hood-themed skivvies, hanging over a vat of acid. They are in the clutches of the Clock King, a time-themed criminal with a clock for a face. (Ha! Clockface!) Quips are exchanged, action taken, villain foiled...and then, cue the theme song.

Whaaaaat? All that just happened before the opening credits?! Oh, baby, I am so in.

Batman: The Brave and the Bold - Season One, Part One collects the first 13 episodes of the DC Comics animated series that premiered on Cartoon Network in 2008. It takes its name and concept from the long-running comic book series that has existed in various incarnations, usually as a platform for one-off stories teaming the Caped Crusader with other DC heroes and, sometimes, villains. I have fond memories of buying my first issue of The Brave and the Bold from the corner 7-11 in the early 1980s. Amusingly enough, it featured Batman forming an uneasy alliance with Chronos, another time-oriented baddie with a clock symbol on his face. Oh, this brings back memories!

In the 1990s, Batman: The Animated Series revitalized the Bat franchise and reminded fans that the Dark Knight Detective was best when his grimness was tempered with good stories. The show was stylish and moody, and it changed the landscape of cartoons and comic books alike, as its style was expanded by the animators who went on to do more solo work and newer artists influenced by what Bruce Timm and his team created. Batman: The Brave and the Bold carries on the basic aesthetic--which, really, has become the DC/Warner Bros. Animation house style, mostly hand-drawn with the addition of some digital effects for machinery and the like--but the new creative team has rolled back even more of the grittiness and is reaching closer to the 1960s Adam West television show, which itself is based on the fun and crazy adventures from the early comics. Hence, the larger-than-life foes, the outlandish schemes. Batman is a hero in an insane world, driven but not totally lost to his goals.

All 13 episodes on the two-disc Batman: The Brave and the Bold - Season One, Part One follow a basic structure. That short intro is mostly separate from the main story, and it features a character who is not in the full show. For instance, that first episode, "Rise of the Blue Beetle!" has Green Arrow in the pre-credits sequence, but as the title suggest, Blue Beetle is the main guest for this installment. Green Arrow will return in episode 5, "Day of the Dark Knight!" but Guy Gardner and the Green Lantern Corps kick things off. Plus, the show also features the Demon in a semi-villain role. It's not uncommon for the animators to stack the cast. Episode 7, "Dawn of the Dead Man!" features the spectral hero Deadman in Batman's battle with Gentleman Ghost, but Green Arrow and his sidekick Speedy are also in that. Episode 6, "Enter the Outsiders!" has the Golden-Age hero Wildcat, but also versions of three revamped characters from the Outsiders--Black Lightning, Metamorpho, and Katana. The versions of those characters are very different than what we know from the comics, and it's actually kind of cool to see the animators adapting these well-known creations for their medium. Their version of Aquaman is the best he's been in...well, maybe forever. Kudos, also, for the Ditko-esque designs of the magic world in the Dr. Fate teaser that starts "The Eyes of Despero!" (episode 10). 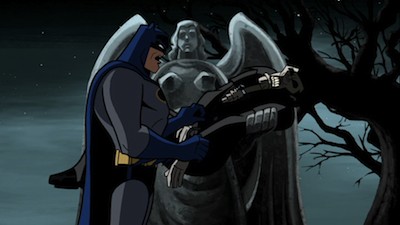 As much as I enjoyed Batman: The Brave and the Bold - Season One, Part One, I wasn't keen on every episode. Often, I was actually more excited by those quick and punchy intros than I was by the main stories. The more outlandish and fantasy-based plots, for instance, don't do much for me. Like in the debut episode, where Batman and Blue Beetle got to another planet, or the "Day of the Dark Knight!" when Bats and GA travel back in time to the Arthurian era of magic and myth. I much prefer the modern-day supervillain stories. "Invasion of the Secret Santas!" for instance has Batman and the android Red Tornado fight Fun Haus, a version of the Toyman, as he unleashes deadly toys to try to ruin Christmas. (For Bat fans, that episode also contains excellent black-and-white flashbacks to the day Thomas and Martha Wayne were killed.) This more jovial Batman has been absent from comics pretty much since DC ceased publishing their Batman Adventures spin-off from the '90s animated series, so I appreciate this return to the old ways--even if his "the more you know" voiceovers are a little cheesy. (Note: DC is currently publishing a version of Brave and the Bold in the spirit of the cartoon, as well as a more serious incarnation that fits in their regular continuity.)

Since I mentioned the voiceovers, I should note that Batman's voice, as well as many others, are done by actor Diedrich Bader, perhaps best known for being a regular on The Drew Carey Show. He does a pretty good Bats, with the now fairly standard growly timbre. There is a rotating voice cast, with each member doing several characters, and there is also some occasional stunt casting. In this selection of episodes, Full Metal Jacket's R. Lee Ermey voices Wildcat and Wil Wheaton plays Ted Kord in the eighth episode, "Fall of the Blue Beetle!"

Here is a basic rundown of the episodes on Season One, Volume One:
1. "Rise of the Blue Beetle!" featuring Green Arrow in the teaser, and the Jaime Reyes version of Blue Beetle in the main story.
2. "Terror on Dinosaur Island!" with Plastic Man, Batman, and Fire fighting the Gentleman Ghost in the teaser, Bats and Plastic Man going to Dinosaur Island to fight Gorilla Grodd in the longer tale.
3. "Evil Under the Sea!": Batman and Atom vs. Felix Faust; Aquaman vs. Black Manta.
4. "Invasion of the Secret Santas!: Batman and the Blue Beetle vs. Sportsmaster; the Christmas story teaming Bats with Red Tornado to fight Toyman.
5. "Day of the Dark Knight!", leading with Batman amongst the Green Lantern Corps; Green Arrow and Batman are taken back in time by Merlin to fight Morgan le Fey, who has Jason Blood/Etrigan the Demon under her control.
6. "Enter the Outsiders!": Batman and B'wana Beast vs. Black Manta; Wildcat vs. the mini-Outsiders, featuring Black Lightning, Metamorpho, and Katana.
7. "Dawn of the Dead Man!: Batman in the future with Kamandi, the Last Boy on Earth; Batman and Boston Brand, a.k.a. Deadman vs. Gentleman Ghost with the help of Green Arrow and Speedy.
8. "Fall of the Blue Beetle!" with a teaser featuring the earlier Blue Beetle, Ted Kord, and then a main story connected to that, with Jaime Reyes and the villain Dr. Polaris.
9. "Journey to the Center of the Bat!": Batman alongside the rubbery Elongated Man and Plastic Man in a battle with Babyface, followed by a story with both Atom and Aquaman.
10. "The Eyes of Despero!": Batman and Dr. Fate vs. Wotan; Batman and the Green Lanterns Guy Gardner, G'nort, and Sinestro vs. Despero and Mogo the Living Planet. (Have no fear, other GLs do appear, including Hal Jordan.)
11. "Return of the Fearsome Fangs!" After the teaser with Jonah Hex, it's Bats and Bronze Tiger vs. the Terrible Trio.
12/13. "Deep Cover for Batman!/Game Over for Owlman!": A two-part story with Batman on a parallel Earth where familiar villains are good guys and good guys are bad guys, and the repercussions of Batman's own evil doppelganger wreaking havoc back in his world. Features many characters we've already seen, but also new faces like Red Hood and Joker.

A stand-out episode is "Fall of the Blue Beetle!" I enjoyed how it handled the idea of a superhero legacy and it's maybe the best expression of Brave and the Bold's major theme: the meaning of heroism.

The whole end of the second disc takes the series into a new stride, with lots of great action and good stories. The kung-fu battles of "Return of the Fearsome Fangs!" are well choreographed and the fighting is fast and fun. The two-part parallel worlds story gathers together a lot of characters for superhero fisticuffs on a large scale, too.

My only complaint about the series is: where are the ladies? It's pretty much a boy's club right now. Two minutes of Fire and then Katana as part of a trio, and that's really that? Come on, guys. A little Catwoman action, maybe? How about some Power Girl? 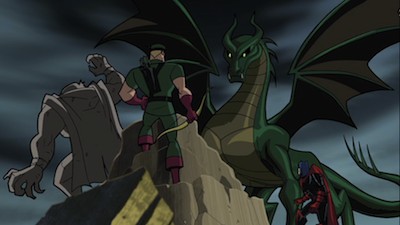 Video:
The Batman: Brave and the Bold series is produced for broadcast TV in widescreen, and the image transfer for this double-disc set looks fantastic. The colors are vibrant and the picture looks great. This is a nicely put-together package.

Sound:
The original English soundtrack is mixed in Dolby stereo. The audio is balanced well and there is no distortion or off-sounding tones.

A second stereo mix features a Spanish soundtrack. There are optional English subtitles for the deaf and hearing impaired, and there is also a French-language subtitle track.

Extras:
Batman: The Brave and the Bold - Season One, Part One is a two-disc set and is packaged in a standard-sized plastic case with a hinged tray. It comes with a cardboard slipcover with essentially the same art as the inside cover.

No extras except for a "Lego Harry Potter" trailer on DVD 1. DVD 2 has nothing.

FINAL THOUGHTS:
Batman: The Brave and the Bold - Season One, Part One is definitely Recommended. The scripts can be inconsistent, but the animation is smooth and the character designs are really good, and with the emphasis being on fun, big superhero adventure is in abundance. For old school comics fans or even kids like me who watched Superfriends, this show puts a lot of familiar superhero faces back on the tube and brings us a whole bunch of capes and tights we've not seen in this medium before. The series seems to be improving, too, as the episodes rounding out these 13 are the best of the lot. 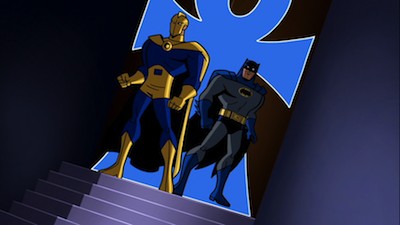