Shout Factory // PG // September 14, 2010
List Price: $26.97 [Buy now and save at Amazon]
Review by Stuart Galbraith IV | posted August 31, 2010 | E-mail the Author
Extremely gaudy and juvenile but also undeniably sincere and affectionate, Starcrash (Scontri stellari oltre la terza dimensione, or "Starcrash Beyond the Third Dimension," 1979) was green-lighted to cash in on the worldwide Star Wars craze, and while this comparatively modest effort definitely incorporates elements from that film, writer-director Luigi Cozzi (billed as "Lewis Coates" in the credits) unquestionably makes it his own. He pays homage to myriad '50s and '60s sci-fi and fantasy films (Invaders from Mars, Jason and the Argonauts, Barbarella, etc.), but visually Starcrash looks almost nothing like Star Wars or anything else for that matter - except other Luigi Cozzi films. Indeed, visually Starcrash is a lot closer to, say, Cozzi's subsequent peplum tribute, Hercules (1983) than George Lucas's movie.

Except for a long out-of-print VHS version released in 1984, Starcrash has been fiendishly elusive, and up to now never released to DVD. Shout! Factory's Blu-ray edition is outstanding, featuring a superb high-def transfer and sporting so many extra features that they spill over into a second standard-def DVD disc. 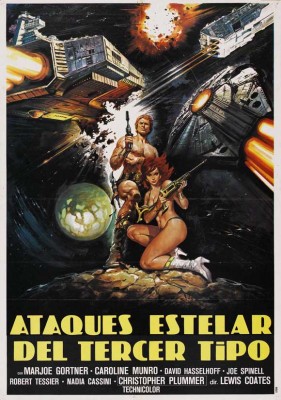 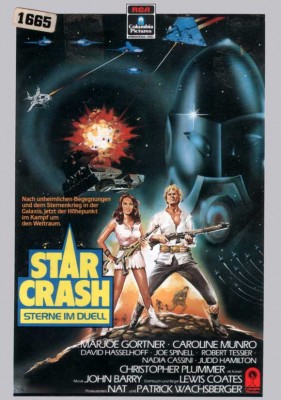 Cozzi pitched a science fiction script to France-based producer Nat Wachsberger, who turned him down cold - until Star Wars opened to huge box office a few weeks later. Wachsberger immediately commissioned a Star Wars type script, to be ready in 10 days - no easy task, as Star Wars hadn't yet opened in Italy and Cozzi hadn't seen it. Originally the project was made in conjunction with AIP, and because of their recent success with The Land That Time Forgot, they demanded the addition of cavemen and dinosaurs, logic be damned. The finished film lacks prehistoric monsters, but does include cavemen.

The movie has almost no plot to speak of: Space smugglers Stella Star (Caroline Munro) and mystical Akton (Marjoe Gortner) are captured by Galactic Police Chief Thor (bald tough guy Robert Tessier, his skin inconsistently dyed blue) and robot officer L (or "Elle," played by Munro's husband at the time, Judd Hamilton, and voiced by Hamilton Camp). Though sentenced to hard labor, Stella and Akton are promised a pardon by the Emperor of the Galaxy (Christopher Plummer) in exchange for finding his missing son, Simon (David Hasselhoff), aboard a spaceship that was on a mission to stop Count Zarth Arn (Joe Spinell) from launching a Death Star-type super-weapon.

Mostly though, Starcrash is eye candy - lots and lots of eye candy, like Willy Wonka's chocolate factory only in outer space. As with other Cozzi films, everything is shot in bright primary colors; even outer space twinkles red, green, yellow, and blue, like a celestial Christmas display. The sets and costume design show much imagination, more than the budget can really accommodate, but admirable nonetheless. These resemble Barbarella (1968) much more than Star Wars, particularly Munro's sexy, revealing costumes, which are on par with Jane Fonda's in Roger Vadim's film.

Munro, though inadequately dubbed, is quite beautiful and sexy in a '70s Playboy centerfold sort of way, though Munro herself was and is contrastingly demure, almost shy. After the bizarre look of the film, she's the best thing about Starcrash.

The rest of the cast fares not so well. Gortner, who came to the project via AIP, was supposed to play a fish-like alien creature, but refused to wear any elaborate makeup. This was a mistake, because without it the former Pentecostal preacher cannot hide his inadequacies as an actor and vacuous screen presence. Spinell, outrageously hammy as the evil Count, looks more like a mad barber dressed up for Halloween.

But Christopher Plummer wins hands-down. Starry-eyed throughout, it's like he's trying to hide his embarrassment by pretending he's playing Richard II in more respectable surroundings, to a reverent crowd back in Stratford, Ontario. Plummer utters the film's best (i.e., goofiest) dialog, usually with dramatic pauses every third word or so: "You know, my son, I wouldn't be Emperor of the Galaxy if I didn't have a few powers at my disposal. Imperial Battleship, halt the flow of time!" And then there's this priceless exchange:

Emperor of the Galaxy: "For the space of three minutes ... every molecule on this planet ... will be immobilized. But after the third minute ... the green ray loses its power. Time will flow ... once more and ...everything will explode."

In fairness, Starcrash is deliberately campy in the manner of Barbarella, though the English dubbing seems to be overemphasizing this, particularly in giving the robot companion a Texas accent, a bad choice repeated in another sci-fi release that same year, Disney's The Black Hole.

After working with Argento on a number of gialli as both a writer and assistant director, Cozzi made his feature directorial debut with The Killer Must Kill Again (1975), a pretty good thriller in the classical giallo mold. Soon after Cozzi's own unique style was unleashed when he created a strange new version of the original Godzilla, madly colorizing the black and white film into something resembling a bad LSD trip, replacing the original score, and adding much newsreel clips, including graphic images from Hiroshima and Nagasaki.

After Starcrash and the vaguely-Alien (but earthbound) knock-off Contamination, Cozzi returned to familiar territory with Hercules and its sequel. As you can tell from this gloriously cheesy trailer, they're very much in the same vein.

Cozzi's enthusiasm and noble efforts to make every scene count is obvious; indeed, nearly every shot in Starcrash shows effort and imagination. He saw the film more as a tribute to another idol, stop-motion master Ray Harryhausen, and while Starcrash's stop-motion scenes are pretty poor, that they're stop-motion at all is an achievement. That the final outcome is incredibly garish and/or clunky is forgivable. It's hard not to like Starcrash, ludicrous though it is.

The 1.78:1 1080p transfer of Starcrash is exceptional, especially considering how much of the film was done with in-camera multiple exposures and, occasionally, standard-def video effects (though not as much as in later Cozzi films). Overall, the image looks great and the colors pop off the screen. Starcrash was a very early Dolby Stereo release; it may very well have been New World's first (and last for a long while). Both the 2.0 DTS-HD Stereo and remixed 5.1 DTS-HD Surround are impressive for such a low budget movie, and bring out composer John Barry's score and the film's sound effects. The film is in English only; there's no Italian track, and the disc is region "A" encoded.

Starcrash is loaded to the gills with supplements, giving even Lucasfilm/Fox's Star Wars DVDs a run for their money. The best of the extras is a visually static and overlong but highly entertaining 41-minute interview with director Cozzi, who speaks English throughout. His love of the genre is quite charming - from the movie collectibles shop he runs for fellow director Dario Argento, Cozzi proudly shows off the first issue of Forrest J. Ackerman's Famous Monsters from Filmland magazine that mentioned his name - and while entirely aware of Starcrash's shortcomings, he remains fond of the picture and its attributes. Good for him.

Über-fan Stephen Romano - who claims to have seen Starcrash "more than 500 times" - co-produced this release, and that proves a mixed blessing. Hardcore enthusiasm such as his can, in the right light, be contagious, and like Cozzi there's no doubting his affection for the genre and this film in particular. Many of the behind-the-scenes photos, posters, and the like reportedly come from his personal collection, and he obviously knows a lot about the making of the film. Overall, Shout!'s edition of Starcrash benefits from his participation.

However. Romano's two audio commentary tracks, one that essentially tries to put Starcrash into pop cultural context while the other, intended to be more anecdotal and screen-specific, are another matter entirely. To each his own, but this reviewer found them amateurish and insufferable. Instead of carefully organizing and distilling his research into a densely-packed commentary of useful and interesting information, Romano seems to be "winging it," rambling almost incoherently at times, often sidetracked by arcane little details from his own life or pontificating about films and other matters unrelated to Starcrash. He spends so much time introducing himself, promoting his other projects and minor celebrity status that by the time he says, "Let's get right to [the film]!" we're already 11 minutes in! Though anyone willing to sit through back-to-back tracks of the same Italian sci-fi movie probably has at least some familiarity with the science fiction genre, Romano talks as if no one in his audience will have heard of movies like Forbidden Planet or Jason and the Argonauts. At the same time, he puts these other films into context so poorly that even those unfamiliar with the genre are likely to walk away hopelessly confused. Though I don't doubt his Starcrash credentials, many of his comments are suspect, especially in the way Romano constantly exaggerates, such as his reference to the "millions of [Starcrash] fans all over the world" or his declaration in the accompanying booklet that he hopes Starcrash will at long last be recognized as "an important work of art."

Included are several trailers, including a French one, and U.S. TV and radio spots. The most interesting of these features a commentary by director Joe Dante; Starcrash was the last trailer he cut at New World, and his approach to it is interesting. "Mars," a U.S.-based film composer, provides some analysis of Barry's score, and there's an exhaustive still, poster, and artwork gallery. All of the above is on the Blu-ray disc.

The second disc, a standard-def DVD, includes 17 deleted/alternate scenes (including an end title song) from the slightly longer international version, and sources French and Italian video masters. This material is accompanied by text helpfully putting the footage into context. Also included is a 72-minute (!) interview with Caroline Munro (her name misspelled throughout Disc 2), who talks extensively about the making of the film and her career generally. Disc 2 also includes the screenplay in PDF format, complete with storyboards and early conceptual art; "The Making of the Special Effects of Starcrash," a strange film by Armando Valcauda, which includes some surprisingly good Harryhausen-esque effects footage that didn't make the final cut. Finally, there's 19 minutes of silent black and white home movie footage, with commentary by Romano. As with other Shout!/Corman titles, this comes with a nice, full-color booklet.

The energy and affection director Luigi Cozzi gives virtually every frame of Starcrash makes it fun and worthwhile, even though the picture itself is really pretty mediocre. The transfer is great and extras, though hit-and-really-big-miss, are plentiful. Highly Recommended.