BBC Worldwide // Unrated // September 14, 2010
List Price: $19.98 [Buy now and save at Amazon]
Review by Stuart Galbraith IV | posted November 12, 2010 | E-mail the Author
Its release to DVD undoubtedly prompted by the hype surrounding Sherlock (2010-present), a re-imagining of Sir Arthur Conan Doyle's detective stories to present-day London, the 1964-65 version of Sherlock Holmes, also produced by the BBC, is nonetheless welcome. This mid-'60s Holmes ran for two series (seasons): the second series, which was produced in color and starred Peter Cushing as Holmes, was released to Region 1 DVD in December 2009. This set consists of the earlier, black and white episodes which star Douglas Wilmer. Nigel Stock is Doctor Watson is both series.

This BBC and 2|entertain release through Warner Home Video is a two-disc set containing 10 of the original 12 hour-long episodes, plus the pilot film, "The Speckled Band," that originally aired as part of another program, Detective (1964). Back in the day the BBC quite foolishly ordered the degaussing (erasing) of old video masters so that the pricey videotape could be recycled for other shows. For this reason two episodes, "The Abbey Grange" and "The Bruce-Partington Plans," are not included. The packaging claims, "no source material exists" for these episodes though, according to the IMDb, the first-half of the former and the second-half of the latter do survive. If that's true I wish the BBC had included them as an extra feature.

(Beyond their obvious shortsightedness, the BBC seems to have arbitrarily selected those tapes to be erased. One would think the Cushing episodes of Sherlock Holmes, in color, would have more potential both as programs to be rebroadcast and in terms of international sales, but even fewer of those shows survive - just six of the original sixteen.) 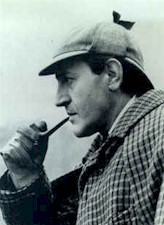 To my surprise I generally preferred the Wilmer episodes to those starring Peter Cushing, even though I consider myself more a fan of Cushing while I merely admire Wilmer as an excellent actor. The episodes are pretty much the same mix of famous ("The Copper Beeches," "The Red-Headed League," "The Six Napoleons") and not-so-famous stories ("Charles Augustus Milverton," "The Retired Colourman") and, other than the use of color, the production values are about the same. Personally, I found the black and white shows much more atmospheric and less harshly immediate and unforgiving the way early color videotape often was. "The Speckled Band," for instance, actually generates a palpable atmosphere of dread, though it still pales compared to the later, marvelous television adaptation with Jeremy Brett as Holmes. Like the Brett series, its teleplays stick pretty closely to the original stories.

Wilmer's Holmes is much less flamboyant than Brett or Basil Rathbone, the Gold Standard among Holmes actors. Indeed, Wilmer's not at all flamboyant, and less erudite than Cushing, less aloof than others in the part. It's a lower-key, subtler portrayal. Some may miss the intensity of the more celebrated Holmeses, but I found Wilmer's performance true to the spirit of Arthur Conan Doyle, and Wilmer himself visually suggests Sidney Paget's original illustrations for The Strand magazine.

Wilmer's colorful career alternated between major supporting roles in big, important films like Richard III (1955), El Cid (1961), Patton (1970), and larger roles in smaller films like the The Brides of Fu Manchu (1966, the first of two appearances as Nayland Smith), The Vampire Lovers (1970), and The Golden Voyage of Sinbad (1974). He appeared in two of the Pink Panther movies and two Ray Harryhausen films, and guested on the usual British TV shows of the period (The Saint, The Avengers). He made a cameo appearance as Holmes (opposite Thorley Walters's Dr. Watson) in the comedy The Adventure of Sherlock Holmes' Smarter Brother (1976). Retired but far younger-looking than his 90 years would suggest, Wilmer published his autobiography, Stage Whispers, last year.

Nigel Stock is one of the all-time best Watsons. Resembling a younger Nigel Bruce, he is not at all the buffoonish sidekick Bruce was in the Rathbone films, but the intelligent, brave, and extremely courteous man of the Doyle stories. Like Dr. Watson Stock spent a good part of his youth in India, and during World War II was with the London Irish Rifles in Burma, China, and Kohima. Though he had uncredited bit parts in movies as early as The Man Who Could Work Miracles (1936) and Goodbye, Mr. Chips (1939), it wasn't until well after the war that Stock established himself as a reliable character player. He may be best known to Americans as "The Surveyor" in The Great Escape (1963), sharing a memorable, funny scene with Steve McQueen. He also appeared in Hammer's wondrously loopy The Lost Continent (1968) and, the year before his death, played the mentor to Young Sherlock Holmes (1985).

The 11 episodes, filmed in the usual videotaped studio interiors/shot-on-film exteriors look fine, par for the course with these British television programs of this era. They're on two single-sided DVD18s, with acceptable 2.0 Dolby Digital mono, with optional English SDH subtitles.

This series may seem downright prehistoric to some, but I found it to be surprisingly atmospheric, intelligent, and engaging, and Wilmer and Watson make a fine Holmes and Watson, in the top 25% certainly. Highly Recommended.