Do you think that farts are the funniest thing people can do? I count myself among the legions of those who will laugh at almost anything involving farts. So, when the chance to review Fartacular featuring Le Petomane arose, I immediately jumped at the opportunity. What lies within this DVD could possibly be the largest collection of fart jokes ever assembled on DVD. However, it's not at all the greatest collection of fart jokes ever assembled.

The main attraction is the 30-minute short film, Le Petomane: Parti Avec le Vent, written and directed by comedian Steve Ochs. The story is based on the real life of Moulin Rouge entertainer Joseph Pujol (Ben Wise) who was better known as Le Petomane. As a kid, Joseph Pujol discovers that he can suck up water through his butt when he falls into a fountain. A doctor examines him and finds nothing wrong. As an adult, Pujol then discovers that he can suck up air through his butt and fart at will--similar to how people burp by swallowing air. 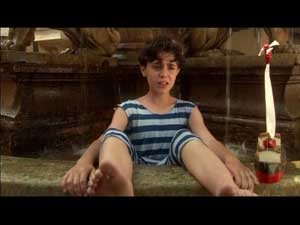 What follows is a hilariously disturbing examination by Dr. Baudouin (Kevin Scott Allen) where the doctor is completely infatuated with this new specimen. This kicks off a subplot where the doctor becomes obsessed with examining Pujol's butt, but Pujol will not let him continue all the weird experiments. That does not dissuade Dr. Baudouin who will stop at nothing to carry on with the examinations. Pujol takes his new farting talent to the stage where he is met by a confused and unimpressed audience. Undeterred, he refines his act to the point where he can make animal sounds, smoke cigarettes, and play the flute with his butt. As Le Petomane, Pujol eventually rises in fame and becomes a star attraction at the Moulin Rouge.

Le Petomane is just long enough to maintain interest and not become boring, but just barely. The subplot about a Dr. Baudouin's obsession with examining Joseph Pujol is comical at first, but wears out its welcome when you realize that the doctor is around for the long haul. Then it just becomes weird. More of Le Petomane's act and less of the obsessed doctor would have made for a funnier film. In fact, if Dr. Baudouin just disappeared after his great first scene, not much would have been lost. A story about a man who learns to harness the power of farting to the point where he can play the flute with his butt is compelling enough without needing a tacked-on antagonist. The ending was bizarre, but somehow fit in with the weirdly funny vibe of the movie. 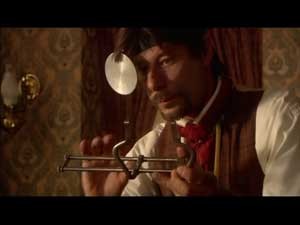 A minor issue with this film is that some of the French accents are very thick. There's nothing wrong with some authenticity, but this is a film designed for English-speaking audiences. The only way to be truly authentic is to film the movie in French with English subtitles--anything less than that needs to be as discernable for American audiences as possible. It's a struggle in a few scenes to make out what is being said and it becomes frustrating to watch. Then somebody farts, you laugh, and all is forgiven. 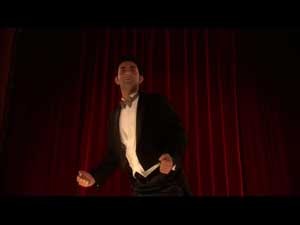 Joseph Pujol's story, as told by Steve Ochs is an amusing tale of life, love, and flatulence. Pujol had a superpower--the ability to fart at will--that he used for the forces of good and entertained the masses. Overall, the short film is funny in parts and contained a few laugh out loud moments, but it's not quite as funny as the DVD cover leads you to believe. Le Petomane is not long, but still manages to cover a lot of material. It will give you some laughs if you never outgrew fart jokes. And really, who ever did?

Sound: The audio is encoded in 5.1 surround sound. Le Petomane is mostly dialogue based, so the majority of the action is in the front speakers. The surrounds are used mainly for ambient sounds such as fart echoes and clapping. There is a "THX Fart" around the 24-minute mark that could make a great demo of your surround system.

Video: The video is presented in nonanamorphic widescreen. There is some line noise and pixelization present. On my Toshiba HD-DVD player, this disc appeared to be missing every other line of resolution. On my Samsung Blu-ray player, the issue was less apparent, but still visible in some scenes. The source material looks as if it would appear fantastic, especially for a low budget short film, but unfortunately, the video transfer is subpar for a DVD release.

Extras: This DVD is loaded with extras such as cartoons and short films--all about farting. The sheer, overwhelming amount of fart clips and short films is just sick. The breadth of the material is appreciated, but the quality is terrible. Many of the extras are just not funny at all, especially the "Wacky Fartoons," which originated as computer animated web shorts. I said at the beginning of the review that I laugh at almost anything involving farts. These cartoons were a rare exception. The Celebrity Fart Challenges are completely unwatchable. They feature bad impressions of celebrities such as Howard Stern and Anna Nichole Smith facing off in a fart battle that is very amateur and not at all funny. Other "Wacky Fartoons" include the agonizingly long Act Harder and the mercifully shorter Circus of the Farts Part 1 and 2.

The "Selected Sharts" are a little better than the cartoons. One is a parody of the trailer for The Departed called The Defarted. Another short, called The Fart Match, features a couple facing off in a tennis-like farting duel. There is one part in the middle that had me in tears laughing, but it should have ended at that point instead of continuing for another few minutes. The other two, Timeowl and Fart Train, are barely watchable.

The last two special features are a Director's Commentary and a Behind the Scenes of Le Petomane. The commentary features director/writer Steve Ochs, cinematographer Bengt Jonsson, and production designer Oana Bogdan. It is an interesting commentary if you enjoyed the film, with Steve Ochs doing most of the talking, while the others chime in. It provides a lot of background on how they set up the scenes and explanations on some inside jokes with very little dead time. The Behind the Scenes featurette runs 21 minutes and features various faces behind the movie. It has a musical montage featuring videos of storyboarding and creating sets and then becomes a video diary about the filming process and opening day.

Final Thoughts: Le Petomane is a somewhat amusing 30-minute fart joke disguised as a period piece. The extras are mostly a miss, especially the "Wacky Fartoons." There are a few chuckles to be found in the collection of "Selected Sharts," but there are some duds in there as well. If you're to type who finds yourself in stitches when somebody lets one rip, then the short feature, Le Petomane, is worth a look. I'm just sure that I'll never watch it again. Rent It.