Universal // Unrated // September 7, 2010
List Price: $69.98 [Buy now and save at Amazon]
Review by Stuart Galbraith IV | posted September 13, 2010 | E-mail the Author
Television's best comedy since Seinfeld, The Office (2005-present) has changed a lot, incredibly getting better-and-better for the most part, no small accomplishment given its humble beginnings as an American remake of a same-named 2001 BBC series created by and starring Ricky Gervais. I have at least three friends who still refuse to watch the American series because they assume the original superior to the copy. It's true the equally fine British series was bleaker with more skin-crawling moments, while its counterpart is broader, less cinema verite realistic, but even by the end of its first season the American Office had found its own unique voice, striking a remarkable balance between side-splitting humor and painful-to-watch relationship tragedies.

Indeed, partly what makes the American Office one of the great shows of the last ten years is that while its supporting characters especially have evolved into outrageous (though often quite hilarious) workplace stereotypes, it has also addressed the economic downturn, cutthroat capitalism and its accompanying lack of humanity with surprising realism, insight that sharply contrasts its freewheeling satire. It's a grimly comic, authentic depiction of the decline of the white-collar middle class that few American shows, even dramas, rarely attempt.

The show's great success has ensured high-quality home video releases. Season Five was the first Blu-ray release and it was excellent, with lots of valuable extra features in addition to its fine high-def presentation. This new season goes several times better. 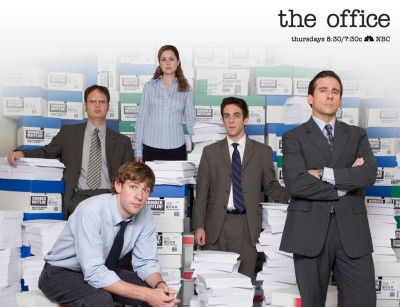 In the last episode of season five, Pam and Jim discover that she's pregnant (a marvelously-staged scene without audible dialogue). Season six opens a few months later, as the young couple prepares for their upcoming wedding in Niagara Falls. Their co-workers at Dunder Mifflin, of course, impose themselves into their plans, threatening the happy occasion.

Meanwhile, looking for financial stability and better pay, Jim pitches the idea of promoting him to regional manager while bumping incompetent boss Michael Scott up to the supervisory position previous held by Michael's shrewish lover, Jan (Melora Hardin), and later by unnervingly, deeply corporate Charles (Idris Elba). Instead it's decided to make Jim and Michael co-managers with equal authority and responsibility, which predictably proves disastrous (but isn't as funny or insightful as it might have seemed on paper). At the same time, rumors the company is on the verge of bankruptcy abound.

Season six gets off to a screamingly funny start, in "Gossip," with Michael accidentally learning salesman Stanley (Leslie David Baker) has been cheating on his wife. After breaking his promise to Stanley not to let the news get out, Michael decides the best way to squelch the very gossip he started is to spread even more outrageous gossip about everyone in the office, hoping word of Stanley's infidelity gets lost in the shuffle.

Another early highlight is the season's fourth episode, "Niagara," a candidate as one of the all-time great sitcom shows. From dim-witted Kevin's (Brian Baumgartner) shoe crisis to misfit salesman Andy's (Ed Helms) dance-floor injury, the episode is rife with laugh-out-loud moments. Best of all, it tops the touching season five finale with Jim and Pam, determined not to let their families and co-workers ruin their wedding, finding a simple, unexpectedly romantic solution to their problems.

The Blu-ray release of Season Six comes nearly simultaneous with news that star Steve Carell will be leaving The Office at the end of season seven. Can the show survive the loss? Maybe, but the fact that the series-long Jim & Pam arc seems to be hitting its apex in season six suggest that, perhaps, The Office should quit while it's ahead.

Characters ebb and flow. B.J. Novak still gets fifth billing as bemused temp-turned-unreformed convicted felon Ryan, but pretty early on the character became much less interesting than many of the supporting characters, whose roles have been beefed up through the years: Angela (Angela Kinsey), the sanctimonious, cat-obsessed conservative; Oscar (Oscar Nuñez), Angela's gay co-worker in accounting, whom everyone in the office constantly embarrasses with their stereotypical views and clumsy attempts at political correctness. Over the last few seasons, Helms's Andy Bernard has emerged as one of The Office's great characters. Though he started out as an unappealing gung-ho salesman with anger management problems, in recent years his painful attempts to be liked have been almost surefire funny; he's the funniest character of this sort since Maj. Frank Burns on M*A*S*H.

Filmed in high-definition video, Universal's The Office - Season Six (or, to be precise, the office - season six) looks great. The 1080p, 1.78:1 HD aspect ratio serves the show well, especially given how much an ensemble show this is, to be able to see multiple characters onscreen with such clarity adds to its intimacy. Audio is 5.1 DTS-HD Master Audio, though there is little in the way background music or extravagant sound effects. English SDH and Spanish subtitles are included.

The 24 episodes, most 21 minutes but with several 28-minute "super-sized" shows or 42-minute "hour" shows, are spread across four extras-filled discs. The menu screens are notably easy to manipulate, with FBI warnings and disclaimers easily bypassed.

As with Universal's excellent Season Five release, The Office - Season Six is packed with worthwhile supplements, the best being deleted scenes for each episode that are usually broadcast-worthy on their own, and seem cut for length rather than any lack of quality. This reviewer is generally not a fan of "deleted scenes" per se, but these are great and there's just under two hours-worth in this collection, all of it in high-def.

Finally, in what may finally get this reviewer interested in BD-Live, Universal is offering a hook-up that will link viewers to Season Seven episodes of The Office after they air on NBC. That's a great idea, and may start a major trend for this with TV releases.

The writing and performances on The Office are just outstanding. At its best it's a wildly funny show that's also identifiable, a kind of commiserating engine on white-collar life in a precarious economy. A DVD Talk Collector Series title.