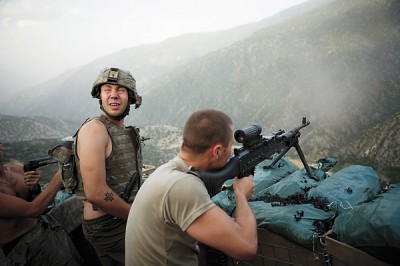 PFC Juan "Doc" Restrepo is featured in the opening moments of the documentary that bears his name, in home movies that he shot himself; he turns the camera around as he mugs and jokes with his buddies, all about to be deployed to Afghanistan. "We're goin' to war, we're goin' to war, we're goin' to war," he chants, giddily. He would not make it out alive. His fellow soldiers would eventually build an outpost where they were fighting, and name it after him. It stood in the Korangal Valley, which CNN dubbed "the deadliest place on earth." American forces had another name for it: "The valley of death."

Restrepo is the directorial debut of journalist Sebastian Junger (The Perfect Storm) and filmmaker/photographer Tim Hetherington. They originally embedded with Second Platoon, Battle Company over the course of a year for Vanity Fair (those pieces form the basis for Junger's book War), but the hours of footage they shot were so riveting and honest that they supplemented them with post-mortem interviews and assembled this film.

The soldier's-eye-view documentary has been done before, and well, in films like Gunner Palace and Severe Clear. But those films were also somewhat limited by the skills of the soldier/cameramen shooting them; the camerawork had immediacy, but not always artfulness. Restrepo gets to have it both ways--it's in the middle of it with the platoon, but there is skill and style in Junger and Hetherington's shooting. They work in a passive, "direct cinema" style, without narration or any particular commentary; they let the soldiers, in their actions and words, speak for themselves.

The men of Second Platoon are compelling--refreshingly honest (one admits to thinking, when they arrived in Korangal, "Ho-lee shit, we're not ready for this"), smart and funny (there's a back and forth between two of them on the walkie-talkies that has the sprung comic timing of Sorkin dialogue). They know exactly what they're into--as Captain Dan Kearney notes, "Where the road ends is where the Taliban begins"--and they cope as we expect them to, with humor and camaraderie. They joke, they bust balls, and when someone plays a corny techno song loudly, damnit if they don't all get down to it.

But the film doesn't soft-sell the difficulty and danger of what they're doing. Several of them pin-point "Operation: Rock Avalanche" as the low point of their tour; it makes for a gripping bit of overheard strategy and battle, but then it becomes terrifyingly heartbreaking, and the cameras don't look away. The most stunning sequence in the film comes after, as their cameras catch the immediate, unguarded emotional aftermath when they lose a man--it's a stunning, raw piece of film.

Their cameras shoot in tight on the details (there's this amazing shot of a hot shell falling into a shoe, and the barefooted soldier shaking it out), and they find a lyricism in this footage--and in these guys. The verité style results in the film meandering a bit, and occasionally feeling a little too loose. But Restrepo also feels overheard, observed, honest and unaffected in a way that professional documentaries seldom do. It's covering somewhat familiar ground, but in a vital, compelling, absorbing fashion.