Warner Bros. // R // October 5, 2010 // Region 0
List Price: $34.99 [Buy now and save at Amazon]
Review by Stuart Galbraith IV | posted October 25, 2010 | E-mail the Author
Over the years I've tried to get a handle on The Exorcist (1973), a film Warner Bros. now immodestly bills as "The Scariest Film of All Time." Unquestionably it's one of the most influential films ever, not only spawning innumerable (and mostly terrible) imitators, but also cementing the viability of studio-produced, mainstream yet explicit horror films, thereby killing the market for companies like Britain's Hammer and Amicus almost overnight. Because of its huge success at the box-office (it was, briefly, the highest-grossing film of all-time) it contributed significantly to the radical shift in the way movies were marketed and distributed.

And yet, somehow, The Exorcist has never worked for me. For one thing, I've never found it the least bit frightening. Not at all - and I'm an easy target for such things. The Haunting (1963), to cite an older, completely non-explicit example, still rattles my nerves even after 10 or 12 viewings. I won't even touch certain Asian horror films. But The Exorcist? Not a single chill down this spine.

My colleague and pal DVD Savant recently posted a fascinating repudiation of the film. I don't intensely dislike it as much as he does but agree with many of the points he makes. Mostly though, I think what power The Exorcist once had has simply dissipated over the years, for a variety of reasons, not the least of which is Warner's aggressive efforts to keep the franchise alive, and by holding onto its King of the Mountain status.

The new Blu-ray offers both the original theatrical cut and director William Friedkin's interesting but ultimately pointless "extended director's cut" from 2000, on separate Blu-ray discs. Beyond the avalanche of recycled extras is a new three-part documentary, in high-def. 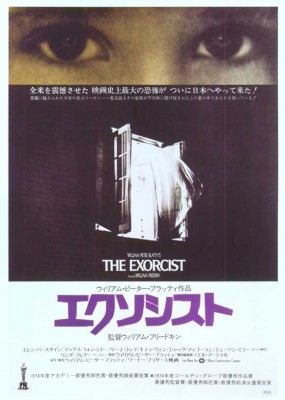 At the same time, Jesuit priest and psychiatrist Father Damien Karras (Jason Miller) questions his faith when his New York-based mother suffers greatly during a final illness, eventually dying alone in her apartment.

However, Regan's condition worsens and it becomes clear to Chris that her daughter is the victim of some sort of possession, possibly by the Devil himself.

The Exorcist had been preceded by Herschell Gordon Lewis's Blood Feast (1963), considered the first "splatter" film, and George Romero's influential Night of the Living Dead (1968), but the vast majority of Exorcist's audience wouldn't have seen those, and with its cursing, vomit-spewing, carpet-peeing, crucifix-masturbating demon-child, it's also far more explicit than Roman Polanski's mainstream hit Rosemary's Baby (1968).

All that mayhem was, if nothing else, something audiences had never seen in a Hollywood movie before, not even Rosemary's Baby. Never before had an innocent child been subjected to such relentless trauma. The violent, obscene outbursts, combined with Dick Smith's effective make-up and the magic show razzle-dazzle of the levitations and all that were, in 1973, startling and unprecedented. But Regan being subjected to one horrifying, nauseating medical procedure after another equally traumatized audiences. They remembered the spinal taps as much as the green vomit.

In the tradition of William Castle, Warner Bros. played up the film's notoriety, the real and imagined stories of people fainting and running out of the theater in terror, and like the later The Omen (1976) shrewdly, tastelessly implied the film was itself literally cursed, that Evil itself had permeated the images onscreen.

It's a handsome film with many fine components; the acting, for instance, is excellent across the board, though some early intimate scenes between Chris and Regan play a bit too much like Actors Studio exercises. But all too often the film relies on cheap, almost shameless tricks to shock.

As Savant points out, The Exorcist moved the horror film away from a genre that relied more on atmosphere, artful camerawork, and a psychological approach to one that subjected its audience with visceral torture/interrogation-like techniques: wearing them down emotionally by subjecting Regan to that alarming parade of upsetting medical tests (this is not a film for those afflicted with nosocomephobia, the fear of hospitals). Ear-splitting shock cuts are gratingly employed, ending placid scenes or cutting away from practically whispered dialogue action with artificial blasts of noise. It's undeniably effective; as many times as I've seen The Exorcist, the atomic blast-like ringing of a telephone in one scene made me jump yet again. The subliminal inserts of demons and the like, attempted previously in films like My World Dies Screaming/Terror in the Haunted House (1961), might have frightened 1973 audience but only seems extraordinarily silly today.

Savant's argument - that the film is essentially anti-science, anti- anything secular and that only conservative, even Medieval Catholicism stands between humanity and chaos - is supported by strong evidence. For instance, he cites the film's clueless doctors whom, when Chris tries to explain Regan's levitating bed, pithily reply, "The problem is not your daughter's bed, it's her brain." We've seen that bed flying around; of course a rational, medical condition isn't the answer. Even they recommend a call to the church once they've exhausted their options.

The picture is awkwardly told, with that long, seemingly pointless and unexplained introduction to Father Merrin that leads nowhere, while the director's murder, apparently by the possessed Regan, isn't shown at all and so badly dramatized many first-time viewers have no idea who the victim is. (The astronaut? The boyfriend? Partly this may be because the actor playing the victim, Jack MacGowran, died midway through production, but it's still sloppily handled nonetheless.) Why make Chris a famous movie star? What's the point of the angry exchange between the drunken director and Chris's German butler? Why is Lee J. Cobb's character in the movie at all?

Both versions of the film look extremely good in their 1080p 1.85:1 presentations. The process shots, dissolves and the like, show their age a bit, but the rest of the film is positively pristine and I doubt it's ever looked better. Dark scenes come off particularly well and the reintegration of footage for the extended director's cut is seamless, though I found the handful of CGI tampering highly distracting and phony looking. Both versions are also superbly mixed with 6.1 and 5.1 DTS-HD Master Audio on the 2000 and 1973 cuts, respectively, and 5.1 and 1.0 Dolby Digital French, German, Italian, and Spanish language options, plus myriad subtitle choices. My Japanese PlayStation 3 defaulted to hidden Japanese menus, language, and subtitle options.

New to home video are three featurettes in high-definition: Raising Hell: Filming The Exorcist, The Exorcist Locations: Then and Now, and Faces of Evil: The Different Versions of The Exorcist. The latter two are quite short, and the first, running about half an hour, touts behind-the-scenes and test footage, but also regurgitates information found in The Fear of God, a previously released feature-length documentary about the film, also included.

There are three commentary tracks, two with Friedkin, the other with author-producer William Peter Blatty; Friedkin also provides an introduction of the 1973 cut; a batch of trailers and TV spots are, regrettably, presented in standard def, as are the filmmaker interviews, original ending, sketches and storyboards, all repeats from earlier DVD versions. A slick program-like and full-color booklet is sandwiched between the two discs.

It's a seminal '70s film and a must-see, but don't be too disappointed if your reaction to the film is similar to what mine has always been: respect for it as a polished, well-made film, but bemusement concerning its reputation as the scariest of horror films, and its unblemished reputation nearly 40 years on. Recommended.