Blue Underground // Unrated // October 26, 2010 // Region 0
List Price: $34.98 [Buy now and save at Amazon]
Review by Stuart Galbraith IV | posted October 15, 2010 | E-mail the Author
Despite some good direction and a sincere, even daring performance by character actor Joe Spinell (Rocky), who also co-produced and co-wrote its screenplay, Maniac (1980) is alternately repellent and boring, despite the obvious intelligence that went into its making. A low-budget slasher film notable for its extremely graphic splatter effects by Tom Savini - who also appears in the picture - Maniac is mostly a character study, anticipating the much superior (if no less unpleasant) Henry: Portrait of a Serial Killer (1986). Each tells its story chiefly from the point-of-view of its serial killer protagonist; Maniac is more graphic and exploitative but also less powerful and disturbing, though Spinell is impressively, authentically repugnant.

As with Vigilante, Maniac was directed and co-produced by Blue Underground's CEO, William Lustig, and for that reason this relatively minor film overflows with Criterion-scale extra features. Maniac - 30th Anniversary Edition is a packed two-disc set (one Blu-ray, one standard-def DVD) touting "over seven hours of extras ... [including] new interviews, commentary, and never-before-seen vintage material."

A word of caution, however: Maniac was shot in 16mm and looks it. According to the packaging it was transferred from the "original uncut and uncensored negative" but it lacks the detail found in the best transfers of filmed-in-16mm productions, such as the Blu-ray of the BBC's Pride & Prejudice, or Blue Underground's own DVD release of Shock Waves (1977). Tellingly, a U.S. trailer included as an extra offers significantly better detail and color. 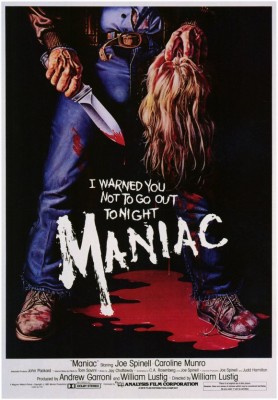 Mild-mannered Frank Zito (Spinnel), a sweaty, pock-faced and overweight New Yorker, manages a run-down apartment, his own unit littered with dolls and full-size female mannequins, some of whom he sleeps with and converses with (to?). The mannequins are topped with scalps ripped from the skulls of his female victims, women Frank brutally murders in a vague, vain attempt to reconcile the anger he still feels toward his late mother, a physically abusive hooker who died in a car accident some years before.

The first-half of the film mostly follows Frank around as he kills one woman after another (and the occasional boyfriend-bystander), using a grisly variety of murder weapons. In Maniac's most notorious scene he shotguns the boyfriend (Tom Savini, billed in the credits as "Disco Boy") of one victim (Hyla Marrow), blowing his head just about clean off in the front seat of his car.

Later, self-proclaimed artist Frank meets fashion photographer Anna D'Antoni (Caroline Munro, Spinell's Star Crash co-star, in a role intended for longtime Dario Argento collaborator Daria Nicolodi). Initially planning on killing her after she had innocently photographed him at a local park, instead the two become friendly and begin dating. (With gorgeous Munro this plot twist is hardly believable though with Nicolodi it might have worked.) Despite this, Frank's already tenuous, intermittent grip on reality - he seems quite normal around Anna in their early scenes together - slips away, and he becomes totally bonkers for the final reels.

Though draggy, Maniac is well-directed and, considering it was shot in 16mm, well-photographed with the camera placement, slow tracking shots and blocking of the actors adding to the creepiness. It's subtle work that contrasts Tom Savini's Grand Guignol make-up effects. It's hard to know for sure, but it seems like Spinell was really aiming for something with artistic merit. He takes chances playing a physically and emotionally unflattering character with uncanny, skin-crawling verisimilitude, and like his schizophrenic character shows a lot of range.

Savini's make-up effects were quite shocking by early-1980s standards, lending Maniac a certain notoriety. But in this age of shows like CSI, Law & Order and The Wire, with graphic violence and make-up effects nearly as graphic and realistic yet broadcast in primetime, Maniac isn't quite the Big Deal it was back then.

The serial killer perspective of the screenplay allows the viewer to glean some insight into Spinell's character but it also makes the film depressing and the show moves at a snail's pace: the effect of spending 88 minutes with this pathetic, empty, and scurrilous human being makes for, to some degree, a pathetic, empty and scurrilous viewing experience.

There's already been several shockingly good transfers of 16mm source elements to high-definition, with the BBC's Pride and Prejudice being one of the best examples. Unfortunately, even taking the smaller gauge into consideration Maniac looks pretty awful throughout despite its 2K high-def transfer and 50GB disc, with weak, tepid color and a soft, milky image that contrasts the two high-def U.S. release trailers included as extra features. Apparently released originally in Dolby Stereo, the new 7.1 DTS-HD mix is impressive, with the film's score coming off best. A 5.1 Dolby Digital Surround EX track is also included, as well as 2.0 Dolby Surround audio in French, Italian, and German. The all-region disc also includes subtitles in those languages save German and plus Portuguese, Japanese, Chinese, Korean, and Thai, though the special features are not subtitled.

The new featurettes are: "Anna and the Killer," an interview with actress Munro much like the one accompanying Star Crash; "The Death Dealer," featuring Tom Savini; "Dark Notes," an interview with music composer Jay Chattaway; and, most entertaining of all, "Maniac Men." The latter explores an urban legend claiming the famous song from "Flashback" entitled "Maniac" had been written for this, with entirely different (and more graphic) lyrics. Lustig sits down with amused songwriters Michael Sembello and Dennis Matkosky in this entertaining shaggy dog story.

All this is on the Blu-ray, which also features "Mr. Robbie: Maniac 2 Promo Reel," featuring Spinell in scenes intended to secure financing for a Maniac sequel, never completed. A gaggle of trailers, TV and radio spots are included; a few of the trailers are in HD.

Disc 2, the standard-def DVD, includes "Maniac Controversy," a fascinating collection of mostly local news pieces surrounding the film's release, including one hugely critical report by critic Gene Siskel. "Maniac Publicity" isn't at all what I expected - posters, lobby cards, etc., but rather mostly a collection of radio and television interviews dating back to the film's original release: Lustig on "Movie Madness," Spinell on "The Joe Franklin Show" and at Cannes, etc. David Gregory's previously available "The Joe Spinell Story" is a 49-minute profile of a fascinating, tragic actor that is funny, sad, and informative.

The exhaustive, very entertaining extra features almost compensate for my negative reaction to the movie itself, as well as to its blah-looking transfer. Hardcore slasher & splatter fans will want to get this, but more discriminating viewers will want to Rent It first.