Note: The screengrabs below are from the 2006 DVD and not the new Blu-Ray release. 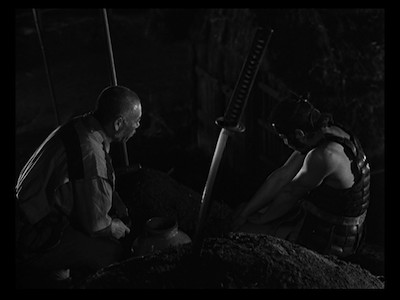 When I find out that someone hasn't seen Seven Samurai, I almost feel sorry for them. How could they have missed out on one of the biggest crowd pleasers of cinema? That fades rather fast, however, when I realize that means I will get the pleasure of introducing them to the film, that I will be making way for something that can't fail to be a positive stop on their movie-going journey.

Akira Kurosawa's 1954 adventure movie is a bona-fide classic. Seven Samurai regularly leads the pack when surveys of the best foreign films are compiled. The term "foreign," of course, being relative to where you are; I am writing from North America, where we are regularly told that we hate readin' our movies, it's too much like book learnin'. Again, these would be the opinions of people who have never seen Seven Samurai, because seeing it eradicates prejudices about non-American cinema. There is no stuffy philosophy, no symbolic chess games with death, Seven Samurai is popular entertainment through and through.

The story goes something like this: in the late 16th Century, a time of civil war in Japan, a remote farming village is under siege by a gang of bandits. Regular raids on their crops have left them with very little to feed themselves. Catching word that the brigands will be back when it's time to harvest the barley, a group of the local men head to the closest major town to try to recruit some samurai to come and protect them. At first, they fail, but then they come across Kambei (Kurosawa-regular Takashi Shimura), a stand-up warrior who has seen his fair share of losing battles. A thief who was interrupted in the middle of his breaking and entering has taken a small child hostage and has the townspeople at a standoff. Kambei shaves his head to look like a monk, talking his way into the shack where the thief has ensconced himself. Lickety-split, the bad guy is dead and the child saved.

Kambei resists joining the cause at first, but when he realizes how great a sacrifice the farmers are willing to make to recruit him, he changes his mind. With the help of an eager young samurai named Katsushiro (Ko Kimura), Kambei recruits four other fighters. A few of them are friends, and one of them is a seasoned master, the stoic Kyuzo (Seiji Miyaguchi). This is one short of the number Kambei hoped for, though a clownish drunk that Kambei rejected will end up being the seventh, whether the other guys like it or not.

That drunk is Kikuchiyo, and he is played by the legendary actor Toshiro Mifune. Though this was not Mifune's first movie, nor even his first with Kurosawa, there is a kind of magic to his performance that is evidence of an artist reaching a new level of craft. Kikuchiyo is the role of a lifetime, giving Mifune a wide space in which to roam. He is funny and good with children, always ready for a ribald joke. He is also a sensitive man, a farmer's son with deep pain he tries to keep buried. Of all the samurai, he is the only one who truly understands how the peasants suffer. Mifune is tremendously physical in the role. The actor has been compared to a wolf before (including in DVD Talk's own Stuart Galbraith IV's book about Kurosawa and Mifune, The Emperor and the Wolf), and the hairy soldier he plays in Seven Samurai shows Mifune at his most lupine. The performance is all instinct, pure animal. Am I crazy in thinking he'd have made a perfect Wolverine in a Japanese version of X-Men? 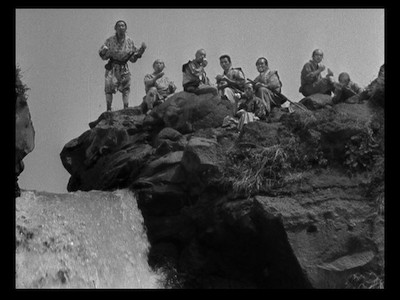 Seven Samurai is a long film. At over three hours, it again might seem daunting, but trust me, it goes by in a flash. The movie is broken into two parts, and Kurosawa, who co-wrote the script with two other writers, picks the natural intermission point. Part I is the gathering of the warriors and their introduction to the village, including preparing the farmers to be a part of their own defense; Part II is the harvest and the battle. In terms of genre, Seven Samurai is basically a western. Kurosawa was making a John Ford movie, substituting ronin for cowboys and the Japanese farmlands for the American West. In doing so, Kurosawa invigorated the form, and Hollywood eventually took as much back from him as he ever did from them. If the plot of Seven Samurai sounds familiar, it's because it eventually became The Magnificent Seven. The evocative musical score of Fumio Hayasaka also pointed the way to Ennio Morricone's work with Sergio Leone.

Of course, like the best genre movies, there is more to this story than just the fighting. Kurosawa's narrative deftly explores the social structure of old Japan, examining the class system and its illusions. The farmers want the samurai to help them, but they fear them at the same time. One of the men cuts his daughter's hair and makes her dress as a boy, afraid one of the fighters will defile her. He is chastised for this, but the truth is, his anxiety is not totally unfounded. Samurai are killers, and many of them are no more honorable than the bandits, regardless of what code they claim allegiance to. The larger story of Seven Samurai is of these two worlds coming together and finding ways to understand each other. They are going to end up down in the blood and the mud together, so they best figure out what they are fighting for toot suite.

Oh, yes, there is blood and mud. Again, I can't stress this enough: Seven Samurai is popular entertainment. These guys aren't duelists sitting around discussing the finesse of structured battle, these are hard fighters going up against some really nasty dudes. The war is long, taking several days, and the strategy loses its form as it goes. The mettle of each man is tested, and Kikuchiyo in particular struggles to come into his own as a warrior. Katsushiro also matures as a character, defined by his other relationships: he both chases that previously mentioned farmer's daughter (Keiko Tsushima) and develops an admiration for Kyuzo.

The fighting is brutal and Kurosawa doesn't sugarcoat it, men really die. The battle culminates in a final skirmish in the rain, leading to a bittersweet ending that comments on the nature of conflict and the price paid by those who undertake it. There is no easy victory. The saber rattling is tone deaf.

The years have done nothing to dull the power of Seven Samurai, nor do multiple watchings make it any less riveting. Each time I see it, the characters come more alive, and their fates never stop surprising me. It's the kind of movie that so grips you, it makes you completely forget you know how it's going to turn out. To this day, filmmakers are still trying to copy how Kurosawa balanced action, drama, and humor. Seven Samurai wins every time. 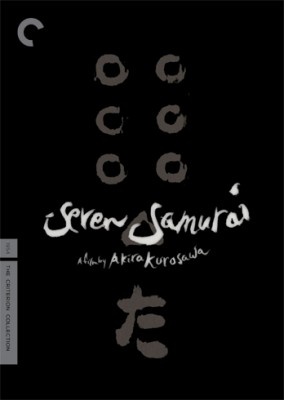 Video:
Fabled as the first ever Criterion DVD (despite its #2 spine number), this is technically the fourth go-around with the company for Seven Samurai (five if you count laser discs). This new BD release pretty much follows the outline of the marvelous 2006 three-disc reissue, though the material has been compressed down to two discs, with the full three-and-a-half hour movie on a single Blu-Ray. The 2006 set was a high watermark in the presentational evolution of older movies in digital formats, and our original review gave it pretty close to top scores across the board.

The Blu-Ray manages to do the DVD even better, bringing more clarity to the movie and improving the overall texture of the transfer. Lights and darks look fantastic, and most of the aging process has been pushed back, the tech team has lessened the scratches so that there is comparably little quantifiable print damage. The added crispness opens up the image and makes it feel more immersive, capturing in particular the full landscapes of the farmers' fields. Seven Samurai is becoming that movie that demands you upgrade every single time, and it's totally worth it.

Sound:
The soundtrack is presented in two options this time around: an uncompressed version of the original mono audio track and an added DTS-HD stereo mix. The mixes are both very good, with the fancier track creating a decent balance between the spirit of the original soundtrack and the benefits of modern technology. I still prefer the mono to be honest; it just sounds more right when the audio is a little flatter.

Extras:
The 3-disc Seven Samurai has one of the nicest packages in the Criterion line, and though smaller in size, the BD version copies the 2006 edition, including the slipcase and the 56-page book. The interior is naturally slimmer, as it only needs to house two discs, but it's actually handier for being more compact.

Disc 1 ports the two audio commentaries from the old DVD to the new format. Track 1 is a collection of pieces from David Desser, Joan Mellen, Stephen Prince, Tony Kayns, and Donald Richie, each covering different facets of the film and spliced together for one amazing feature-length audio discussion. The second is the original audio commentary by Michael Jeck, which fans of Seven Samurai will know has been kicking around since the original 1998 release. No extra will be left behind!

Disc 2 is now entirely supplemental material, and again, everything from last time around is carried over, there is no need to have to dig out that old disc for something you might have enjoyed prior. Plus, they are all now in HD.

The supplements on Disc 2 are as follows:
* Akira Kurosawa: It's Wonderful to Create: The 50-minute Seven Samurai-specific episode.
* My Life in Cinema, the epic length (nearly two hours) conversation between Akira Kurosawa and director Nagisa Oshima (recorded in 1993).
* Seven Samurai: Origins and Influences, a 55-minute look back created for the 2006 DVD.
* Three trailers and a teaser.
* Gallery of photos, promo materials, and production stills.

FINAL THOUGHTS:
The Criterion edition of Seven Samurai has been a gold-standard in terms of DVD production for several years, and now it's setting the bar high on Blu-Ray, too. This extensive package of the classic action-adventure movie is a mirror of the one that came out four years ago, but it's updated for a whole new era. Boasting a fabulous picture and illuminating extras, it goes beyond just the excellence of the movie and becomes all about excellence of presentation, too. DVD Talk Collector Series.