"Jesse Stone...we never talk about what we're talking about."

Another solid entry in the Jesse Stone series. Sony has released Jesse Stone: No Remorse, the sixth Jesse Stone made-for-TV movie starring Tom Selleck as the embittered, alcoholic police chief created by crime novelist Robert B. Parker (the movie is dedicated to Parker, who passed this year). Fans of this series will not be disappointed in this suspenseful, telling entry (Selleck is, dare I say, masterful in his continuing exploration of the character), and newcomers should feel welcome to jump in at this point: Jesse Stone: No Remorse is as good as you get with the now-dwindling number of network-aired made-for-TV movies. 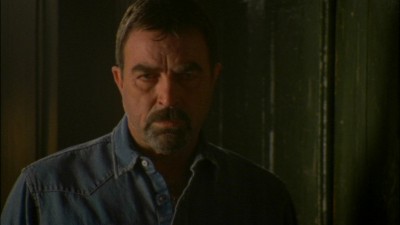 Taking up where the previous Jesse Stone movie, Thin Ice, left off, small-town police chief Jesse Stone (Tom Selleck), is spiraling down into alcoholism and depression at his secluded, mournful home. Having been put on indefinite suspension (without pay) for his willful disregard of council wishes by Paradise, Massachusetts' head of city council, Carter Hanson (Jeremy Akerman), Stone has nothing to do but sit and drink and contemplate the mess that is his life. Having "come down" career-wise by accepting podunk Paradise's job offer, the disgraced ex-L.A. hotshot detective has nowhere left to fall; he's at rock bottom, and it appears he's willingly letting himself slip into oblivion. Severely damaged by his unsuccessful marriage (his ex still calls to seductively, sadistically torment him with the implied possibility of getting back together whenever her new relationship falters), the debilitating effects of policework on his mental well-being, and the resulting alcoholism, without the structure of the routine, Barney Fife workload provided by being Paradise's top cop, Jesse is shutting down, cutting off communication with his former colleagues, Deputy Rose Gammon (Kathy Baker) and acting police chief Luthor "Suitcase" Simpson (Kohl Sudduth), and eventually pulling his phone out of the wall. Those who take it upon themselves to visit Stone at his home uninvited, are greeted by a ravaged, drunk or hungover Stone, carrying a pistol. 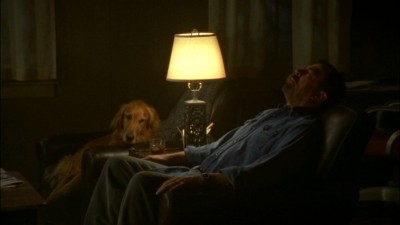 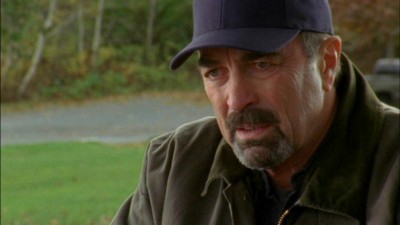 Fortunately, Stone's friend Healy (Stephen McHattie), Massachusetts's State Homicide Commander, understands that work--any police work--is what Stone needs to keep him from breaking down completely. Since Stone is on suspension, he can help the recovering Healy with a case (Healy was shot along with Stone, in the previous film): two brutal, unrelated murders in the parking garages of Boston...two murders that lead to a third shooting, all of which are somehow connected with gangster Gino Fish (William Sadler). Reinvigorated (as much as he can be) by this return to what he does best, back in Paradise, Stone circumvents council's orders that he partake in no police work by guiding Rose and in-over-his-head Luthor, on the sly, in their investigation of several brutal convenience store robberies that resulted in the death of a clerk. 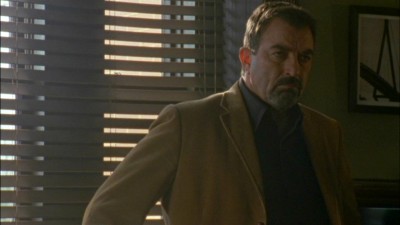 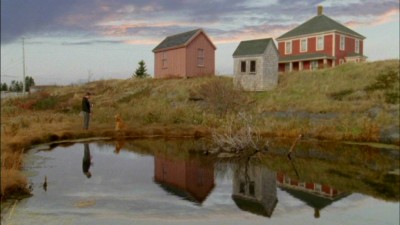 Do the big three networks even make "event" made-for-TV movies anymore, or is that all on cable channels like Lifetime? It's a form I've loved since childhood, so it's reassuring to see something like Jesse Stone: No Remorse showing up on CBS on a regular basis this late in the network game...particularly when these movies are of such high quality. I've reviewed all but the first Jesse Stone movie in the Tom Selleck series (you can read those reviews here), and I'm continually impressed with the films' rock-steady writing, direction and performances...which probably shouldn't be all that surprising since largely the same behind-the-scenes crew is carried over from movie to movie (director Robert Harmon has helmed all six). I've always maintained that Selleck's deft portrayal of Stone is fast-becoming his signature role (or at least it should supersede Thomas Magnum), but mention should also be made of his screenwriting talents. He's listed first here as the co-writer, along with executive producer Michael Brandman, and their script is yet again another beautifully spare, simple, forceful excursion into modern-day noir sensibilities, filtered through the detective form, with oblique, almost Hemingwayesque dialogue that suggests volumes of unspoken intent and meaning in each line (and as importantly, in each pause of the actors' deliveries). As an example, when Rose finally tracks Jesse down at his home, they exchange frugal verbal parries at each other, leaving the burden of personal revelation on each other (which is never picked up), before Jesse heavily states, "I need help." We know what he means, and so does Rose: his life is out of control. But he immediately follows that with an elaboration: he needs help programming his cell phone. That simple exchange says much about the character--old-fashioned, resisting modern conveniences, canny enough to cover himself when he reveals too much of his emotional state--and it's beautifully played by the two performers. That kind of elliptical, suggestive dialogue is exceedingly rare on today's television, where it seems that complex themes are often avoided in favor of easier digested bromides, telegraphed with crass obviousness. 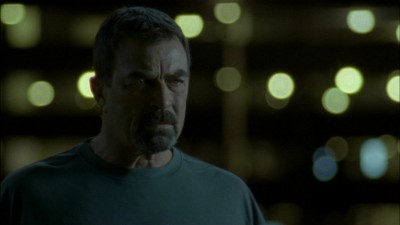 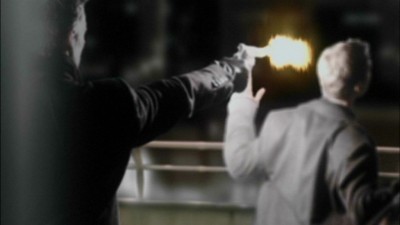 The film's two subplots--the murders in Boston, and the robberies in Paradise--are quite involving precisely because they're so different, ironically illustrating two sides of criminality that we expect to synch up differently than they do here: premeditated, revenge-based murder in the big, anonymous urban city of Boston, and senseless, random, anonymous violence in the small, comfy town of Paradise, where everyone knows everyone's business. Expecting those crimes to be reversed in locale only makes Jesse Stone: No Remorse all the more jangly and nervous, particularly when Stone makes it clear to convenience store clerk Emily Bishop (Mae Whitman) that there's probably little the police can do to protect her, unless the understaffed cops luck out in finding the perps before they kill again. That's why he suggests she carry her own gun--Murder, She Wrote's Cabot Cove this ain't, and the realization that big, strong, capable Jesse Stone is admitting the police can't protect a store clerk in sleepy Paradise, Massachusetts, is an unnerving note struck here.

I've enjoyed the reoccurring Gino Fish character played by William Sadler (from Parker's Spencer novels, as well), and in this installment, we're given a little bit more insight into the complexities of the character, with his sexuality figuring prominently in the mystery (William Devane's ex-cop/therapist character Dr. Dix gives out more background here, as well, as we learn why he quit the force and started drinking). It's a tough line to walk, making such a morally-repugnant character (he is, after all, a gangster and pimp, according to Stone's friend, Sister Mary John, played by Kerri Smith) into an at-times sympathetic figure who respects Stone's intelligence and balls, quite frankly, and who has helped him in the past. But the convolution of the character's motives is simply yet diffusely rendered, as are all of the characters that enter into Stone's world in Paradise and Boston (I only wish there had been more of Saul Rubinek's crafty ex-councilman/ex-con "Hasty" Hathaway featured here; he's a marvelous evocation of small-town crookedness and rot). You really have to listen to the dialogue here to begin to understand the characters. Most unusual, Stone's conflicted association with his adopted dog, Reggie (played by Joe), strikes perhaps the most mournful, abortive tone in the series (while neatly summing up the Stone character in general) as it comments devastatingly on Stone's own perilous emotional state. Reggie, who witnessed his master's murder in a prior Stone film, sticks with Stone like a lodger at his house, but neither dog nor human show any outward affection towards each other. Stone complains to Dr. Dix in a session that he feels Reggie is watching him and judging his actions; specifically his drinking (indeed, director Harmon and editor Steven Cohen manage some remarkable shots of talented dog performer Joe dolefully reacting to Selleck's emoting). Finally verbalizing to Dix that he keeps Reggie at a distance because he's afraid of losing him like he lost his wife and first beloved dog, Boomer, one night Stone tentatively reaches out to Reggie, tapping the bed to beckon the dog to sleep there with him. The dog, however, refuses, just as he later refuses to return the stick that Stone throws for him. Reggie, it turns out, is just as damaged as Stone is, and no amount of good will or good intentions is going to heal him. He's seen too much. Just like Stone. 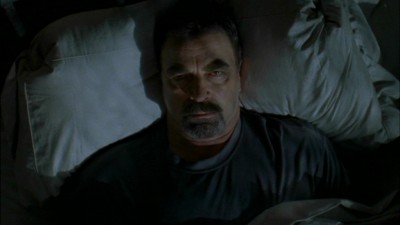 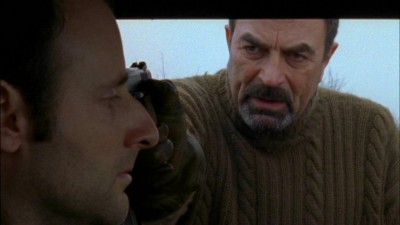 The Video:
The anamorphically enhance, 1.78:1 widescreen transfer for Jesse Stone: No Remorse is, like the rest of the Jessie Stone series, without flaws; the often-times dark film holds its blacks well, with little or no grain, while colors are subtle and correctly valued. Image is perfectly sharp and clear, and no compression issues were noticeable.

The Audio:
The Dolby Digital English 5.1 is feature-film quality, with subtle sound effects and music cues directionality that adds enormously to the film's chilly, dense atmosphere. English subtitles and close-captions are available.

The Extras:
There are no extras for Jesse Stone: No Remorse.

Final Thoughts:
These Jesse Stone films are some of the best programming on network TV. A noirish detective outing featuring another stand-out performance by Tom Selleck as the alcoholic, guilt-ridden police chief Jesse Stone, Jesse Stone: No Remorse benefits from a spare, evocative script co-written by the multi-talented Selleck that slyly looks at not only the continued breakdown of the central character, but the merging of small-town and big-city urban violence and crime. A solid winner all the way down the line for adults who want something more than senseless action, gags, and special effects in their police procedurals. I highly, highly recommend Jesse Stone: No Remorse.