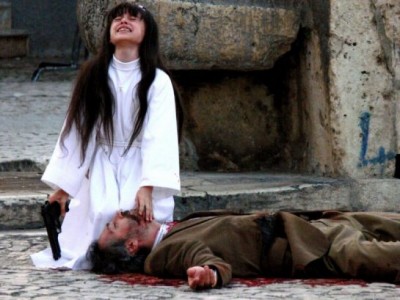 In the opening scene of Marco Amenta's The Sicilian Girl, Rita (Veronica D'Agostino) refuses to give up the pistol she's been carrying. "It's all I have of my father," she explains. The entire film grows out of that dichotomy between sentimentality and violence, between familial obligation and brutality. It's a deliberately muted picture, which works both for the film and against it, but whatever the reservations, it is well worth seeing; Amenta digs deep into his story to find the soul underneath, even at risk of alienating more hyperactive viewers.

The film, based on a true story, begins in 1985. Rita is the title character, the young daughter of a powerful Mafia don. She's oblivious to exactly who he is, but she knows that he is (as they always say) respected, and that he dotes on her--she's daddy's little girl. But then he is shot down right in front of her, in broad daylight, and young Rita is blind with rage. "We'll avenge Dad one day," her brother promises, and several years later, they attempt to do just that. But their plan leaves her brother dead as well, and Rita finally realizes the one way to take down the men who killed her father: by breaking the Mafia's code of silence, going into witness protection, and putting them all away, for good.

The early scenes, before the death of Rita's father, have a lyrical intimacy that is disarming, as is Amenta's frequent use of the subjective camera (several shots are from young Rita's eye level, and when she and her father stumble upon a dead body, his hand goes over the lens to shield her eyes). But he doesn't soft-pedal the violence, either; it's the kind of movie where, in retrospect, you realize it was no accident that little Rita was wearing that particular white first-communion dress in her final scene with her father.

Amenta adopts a low-key approach, choosing not to go for the kind of baroque, operatic tone we've come to expect from this kind of material. It's easy to see why he makes that choice--the flat, matter-of-fact conception makes several scenes fall more chilling. But the restrained style also keeps the picture from packing much of an emotional punch; additionally, the pace lags a bit, and the film feels longer than its 110 minutes.

In the second half, you feel a readjustment taking place; it is played less as an earthy crime story than a character-driven chamber piece, and it is more successful as the latter. Subtly, we begin to understand how this bold and potentially deadly decision has given Rita control of her life for the first time; she discovers her own confidence and sexuality in the freedom within her changed life. That newfound determination is seen most clearly in a powerful scene where, making her first entrance into the courtroom, she breaks away from her guards to stride past the men she's accused, and looks them all dead in the eye.

In those courtroom scenes, Amenta keeps the camera moving restlessly, clearly afraid of the inherent stagnation of such sequences; it feels like he's trying too hard. And the picture's big third-act turning point is foreshadowed clumsily and obviously. But the closing scenes are genuinely potent, and the filmmaker's eye for detail (he's made several documentaries about the Sicilian Mafia, including one about Rita Atria) serves him well here. The Sicilian Girl demands more patience than some viewers might be able to muster, but those who can tune in to its particular wavelength will find it thoughtful and rewarding.