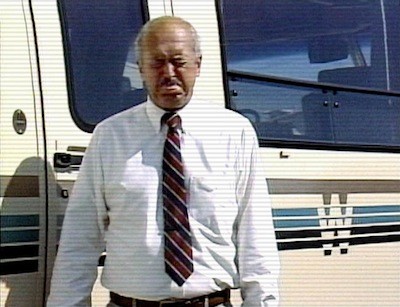 Most people have seen the videos of Jack Rebney, a.k.a. the Winnebago Man, a.k.a. The Angriest Man in the World, at some point or another. At one time an underground VHS sensation, in the digital age, guys like Rebney have become YouTube mainstays. The angry RV salesman clips have been culled from outtakes from a 1989 industrial video made to promote Winnebago vehicles, and they show a frustrated, foul-mouthed pitchman lashing out against nature, his crew, and his own inability to get his lines right.

It's funny stuff. Rebney has a gift for cursing, and there is some catharsis to be had in watching him lose his cool. Some of the chuckling is superior, some of it is knowing--a mixture of laughing at and laughing with. (As a guy with a temper and a Deadwood-esque vocabulary, I empathize.) A few years ago, documentary filmmaker and cinema professor Ben Steinbauer started to wonder what the story was behind these videos. Who is Jack Rebney, what is he doing now, and why was he so angry?

Winnebago Man is Steinbauer's search for the salty salesman--a difficult quarry, as it turns out. Amidst the dead ends and blind alleys, Steinbauer noses around the mythos behind the clips and explores the whole phenomenon of viral videos and how it effects the people who unwittingly become internet stars. The documentarian eventually finds the crew who worked with Rebney, and then via a private investigator, a lead on the man himself. Rebney has been living as a hermit in the mountains in Northern California, and though at first he pretends to be cool with his infamy, once he gets comfortable with Steinbauer, he reveals that his true reaction is a mixture of bafflement, disgust, and humiliation.

Steinbauer has stumbled on an interesting idea here. We watch all of the unintentionally hilarious videos online, and we never give a thought to the people who made them. Some guy falling down and breaking every bone in his body may look hilarious when we don't know anything about who is getting hurt, but that doesn't erase the fact that someone actually fell down and broke every bone in his body. What happens if that person we are laughing at gets to finally tell his side of the story?

Well, as it turns out, unless that person has a colorful history and a willingness to open himself up further in order to share, what happens is very little. Winnebago Man starts strong and has some good moments along the way, but there's not much protein here. I don't know much more about Jack Rebney now than I did before watching the movie. He tells us a little about his career as a newsman prior to the RV job, and we get to peek in on his current living situation, but he shuts Steinbauer down before the director can dig any deeper into what makes his subject tick. Rebney is still angry, still loquacious, and he's ready to lash out at the world, but he's smartly distrustful of how Steinbauer will portray him. 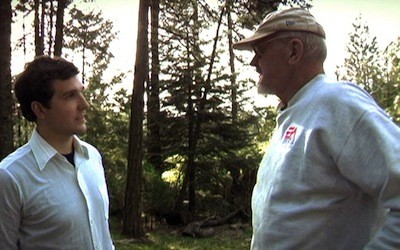 More irksome, though, is how Steinbauer portrays himself. The filmmaker adopts a role similar to what Morgan Spurlock (Super-Size Me) does in his films, positioning himself as an integral part of the subject. The documentarian and his quest for "truth" is given at least as much screen time as the titular Winnebago Man, and by film's end, I think Steinbauer has unwittingly exposed himself as a less than ideal witness. There is an irony to how much he flounders in trying to make his movie, it's almost as grueling a shoot as the original RV promotional, but it's hard to have the same kind of sympathy for the mealy mouthed Steinbauer. For as much as he claims to care about Jack's reality and the guilt he professes in taking part of this communal freak show, Winnebago Man contains far too many scenes of Steinbauer poking the bear for his handwringing to be believable. Rebney keeps telling him where he would want the film to go, but Steinbauer keeps pushing his agenda. I understand that he had a film he wanted to make and once he was in the wilderness, he had to salvage what he could, but maybe he should have taken a step back and found another way.

But then, Winnebago Man isn't that well made a documentary overall. Steinbauer and editor/co-writer Malcolm Pullinger know their way around their material and put a lot of it together in a professional manner, but their ability to come up with creative solutions for how to present some of it appears limited. Shots of Steinbauer pressing play on his answering machine or flipping through a phonebook are superfluous and cheap, and there are various scenes of Steinbauer back home engaging in his search that look like bad re-enactments. This is the problem when your documentary filmmaker can't stay behind the camera; he's too busy figuring out how to put himself in the frame to realize his story is unraveling. You'd think he'd intended to call the feature Winnebago Man & Me.

Thankfully, Jack Rebney comes to his own rescue in the final act, giving Winnebago Man a redemptive ending that is surprisingly touching. The old man agrees to go to San Francisco for a screening of his highlight reel and meet his fans and discover that they aren't so bad after all. One guy on the street who, before the show, basically says he's there for all the mean reasons Rebney fears, even emerges from the event with the realization that he was wrong. In only a couple of short hours, he goes through a bigger character arc than Steinbauer does over a couple of years. Finally, the filmmaker finds the transformation he is looking for, and it's outside of himself. Which, shouldn't that have been the point all along?

Winnebago Man is intermittently funny, occasionally touching, and if you have any kind of passing interest in the subject, there is enough here for you to take away that you won't be entirely dissatisfied with your viewing choice. You just need to know going in that it's not going to be the all-purpose cinematic vehicle you may be hoping for.