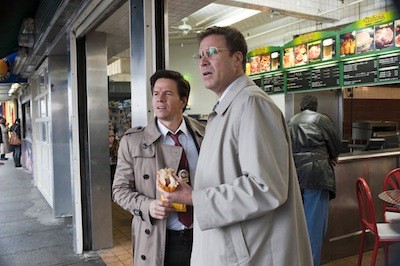 As we know from watching countless action movies over the years, New York is a tough place full of bad people. In the war on crime, there are only a couple of muscled-up supercops standing between the average citizenry and total chaos. In this movie, they are P.K. Highsmith (Samuel L. Jackson) and Christopher Danson (Dwayne "The Rock" Johnson), two over-stimulated butt-kickers who wreck cars and property in inverse proportion to the severity of crimes they solve. They take care of the crooks and get them off the streets, and the clean-up and administrative stuff and all that boring junk, that will get done by some other guys. In this case, desk jockeys Allen Gamble (Will Ferrell) and Terry Hoitz (Mark Wahlberg). The Other Guys. Get it?

The Other Guys is the new movie from Adam McKay, Will Ferrell's production partner and the director of quite a few of Ferrell's more successful films, including Anchorman. At its best, mostly in the first half hour or so, The Other Guys appears to be swinging for the same absurdist fences as the Ron Burgundy story. In particular, the coupling of Ferrell and Wahlberg has some initial magic that is really very funny. Ferrell's character, Gamble, is a meek accountant who doesn't want to be involved in danger, while Wahlberg's Hoitz is a perpetual wave machine of anger. A screw-up early in his career has gotten him stuck on a desk and partnered with a bean counter, and he spends every rage-filled minute of every angry day letting Gamble know just what he thinks of him while Highsmith and Danson are out sucking up all the glory.

Of course, the set-up here is that Highsmith and Danson can only defy danger for so long, and when they are taken out of commission, Hoitz sees his opportunity to rise. He wants to crack the high-profile cases, but instead Gamble brings him a little ditty about some missing construction permits. The two arrest an international financier (Steve Coogan), who is kind of like a bastard offspring of Gordon Gecko and Bernie Madoff. He's got his fingers deep into some dirty coffers, and when everyone seems intent on getting Gamble and Hoitz off the case, they know they are really on to something.

And that's when the movie loses most of whatever something they have. Up until then, The Other Guys is a rude comedy that rides primarily on the raunchy back and forth between Wahlberg and Ferrell, as well as their interaction with the supporting cast. (Most of the other players are fairly anonymous, but special note should be given to Michael Keaton, who makes the most of a part that shouldn't be nearly as memorable as it is.) The further we get into it, however, the more McKay and co-writer Chris Henchy (Land of the Lost) get wrapped up in the story. But who cares about the story? The Other Guys is a parody of buddy cop movies, so it should be more about the comedy than it is about the criminal plot. Even the action stops being funny, going from over the top and ridiculous (Jackson and Johnson crash their car into the side of a double decker bus, Johnson climbs out of the car and starts driving that bus) to just over the top. The wrecked cars pile-up in equal number to the dead jokes. 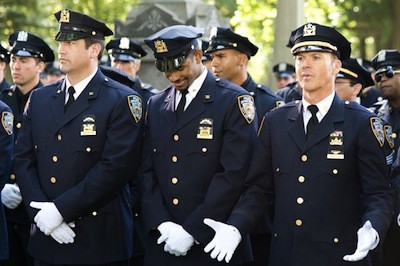 Look, I get why guys like Ferrell and McKay make these kinds of movies. They even have Mark Wahlberg spell it out for us: it was fun to play cops and robbers when they were kids, and it's even more fun now that they can actually play with guns and blow stuff up and get paid to do it. The problem is, that was also the point of Hot Fuzz, and after Hot Fuzz you have to bring something better than this to compete. There are long stretches of exposition and false sentiment where there should be jokes, and for all the hard work that goes into getting there, the climax can't even muster the barest hint of excitement or tension. If you're not going to let me laugh, you've got to give me something else instead. And if you're going to send-up the machismo of these kinds of films, then you'd best stick with it, because the jokes about women and gays get pretty tiresome once the self-deprecation turns into self-aggrandizement.

The conflict between giggles and gunshots isn't the only thing that's schizophrenic about The Other Guys, either. Bubbling underneath the surface of this movie is a commentary on the financial meltdown that hit the U.S. economy just as Bush was rounding out his second term. Coogan's character is a crooked moneyman borrowing from one investor to pay off another, building a pyramid of debt that is about to catch up with him. He's not a bad villain for a light-hearted film, Wall Street scam artists are pretty easy to hate. McKay drops all pretense, though, and the commentary grows unbearably toothsome in, of all places, the closing credits. Curious who played the hot female mercenary? (Tess Kartel, just in case you really were.) Well, her credit shares screen space with an animated power point presentation about how badly AIG, Goldman Sachs, Madoff, and the like stiffed the American people. All soundtracked by a song called "Pimps Don't Cry," performed by Cee-Lo and Eva Mendes (who, I might add, proves she is running out of steam playing yet another of her endless girlfriend/wife roles). Where the hell did all of this come from? First we'll make you laugh, America, and then we'll make you think. (Then again, maybe that's the trick: there is nothing else worth writing about in The Other Guys, so every reviewer will be forced to pass on McKay's message. Hmmm...diabolical much?)

The Other Guys is a case of too many things going on at once. It's an action movie, it's (barely) social commentary, and it's a comedy. Only the latter appears to be Adam McKay's forte, and when he sticks to it, he can still pull off some great gags. He just doesn't stick to it enough this time around to make The Other Guys ever rise above the also-ran distinction. 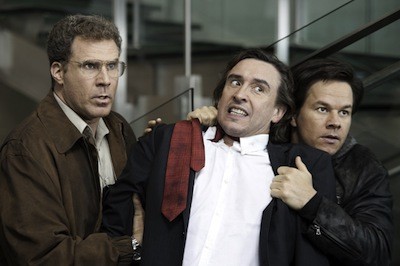