There's something about Modern Family that I can't quiet put my finger which bugs me. The show has recognizable names and faces, and seems to be one of a few shows that receive critical and popular acclaim almost immediately from the jump. Maybe I'm over thinking it, but I'm one of the folks that just doesn't understand what all the fuss is about when it comes to this ABC programming staple.

It's not without an interesting premise. A "documentary" crew follows around a trio of families. The patriarch is Jay (Ed O'Neill, Married With Children), who divorced his wife only to marry the much younger and very Colombian Gloria (Sofia Vergara, Four Brothers) and taking on her intellectual 11-year old son in the process. Jay's two older children have families of their own. Claire (Julie Bowen, An American Werewolf in Paris) is married to Phil (Ty Burrell, The Incredible Hulk) and the couple have three children. Mitchell (Jesse Tyler Ferguson, Untraceable) is the slightly less traditional one, as the show starts with him and his boyfriend Cameron (Eric Stonestreet, The Island) just returned from Asia with a freshly adopted baby girl. 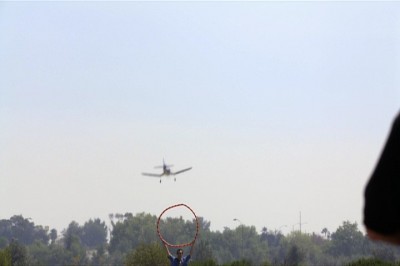 Spread over four discs, the show's first season run of 24 episodes chronicles their lives in front of the camera crew, and throws in interviews with the family at various points through each installment. There's moments of great hilarity and clever lines that go above what you'd expect for a sitcom that on the surface attempts to try do handle a lot, but does it without much effort. There are capable performers in Bowen and O'Neill, with the latter almost seemingly channeling an older Al Bundy, who's become more refined and at ease in his later years now that Peg and the kids are out of the house. Having a trophy wife like Gloria will do that for you I guess.

The other thing that's striking to me is that for a first season sitcom, Modern Family brings in a small group of guest stars whom you'll immediately recognize, then almost immediately ask yourself "What the Hell are THEY doing here?" Familiar performers like Elizabeth Banks (Zack and Miri Make a Porno) show up as Mitchell and Cameron's wild female friend. Justin Kirk, currently on the Showtime comedy Weeds shows up as a prospective job opportunity for Mitchell. Then you have your random appearances. I'm still trying to figure out how Oscar-nominated Edward Norton (Fight Club) is doing, playing the former bassist of 80's group Spandau Ballet appearing to play the hits for Phil at his birthday. But for as baffling as that may be, Chazz Palminteri (The Usual Suspects) provides an appearance as a longtime friend of Jay's whom might be gay, and results in great laughs. 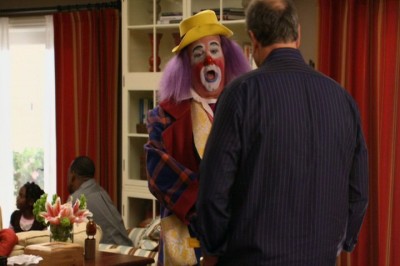 Yet with all these names and some big belly laughs, there's still some faults I find with Modern Family. First, with the approach of handheld and occasional jittery camera use, the references to Arrested Development have been abundant. However, let's be clear about something: the brilliance of Arrested was in the ability to push boundaries and be edgy within the entire cast and not smell the roses. In Modern Family, there's more mugging to the cameras of the documentary crew to enjoy a joke or particular moment that it borders on insulting. Look, if something's funny we'll laugh, or you can move on to a joke that's coming up that you know will be funny. That's was Arrested did; Modern Family almost seems to say at times "Look at what was said here! Look at how funny it is!" I'd hope they would be a little more secure in their sensibilities to avoid that.

Along these lines, the two people that seem to be lauded for their performances in the show (Burrell and Stonestreet) for my money don't deserve the acclaim that they do. Burrell at least conveys the portrait of a husband who's aware of his place in the family. He knows Claire runs the show, and when he tries to get a little more "power" in the dynamic it's funny to see it fail. But can we do without the mugging to the camera both in and out of the interview segments. It's as if he's a hairier version of Steve Carell's Michael Scott in The Office, right down to the semi-detached quotes and sayings. As for Stonestreet, I'll give him credit for going full bore into the role, but the "big guy who's gay" thing seems a bit too sensationalist for me.

There is no denying that Modern Family is a big formidable behemoth of popularity, with people flocking to appear on it. But when you look past the surface, any comparisons to Arrested Development should really be in style only, as the comedic elements spoke more to an Everybody Loves Raymond tone more than anything. The kids are a little older is this and have more impact than in Raymond, and everything is still wrapped up in nice 21- minute packages without any real storyline or character advancement. Comparing it to edgier material only really insults the material it's being compared to, and perhaps that's my biggest issue with Modern Family. Let's just agree you're safe comedy so I can respect you in the morning, OK?

All of the episodes of Modern Family are returns in 1.78:1 anamorphic widescreen, though it wouldn't surprise me to find out that it was shot in high definition. But the standard definition discs aren't shabby in their own right. Blacks don't possess much crushing, skin tones are replicated accurately and when the production goes to Maui late in the season, the exteriors look outstanding, and the other islands in the background are clearly visible in the shot. The discs look excellent.

All of the episodes come with a Dolby Digital 5.1 surround track that feels slightly wasted on the show. There's little noticeable action in the rear channels as far as directional effects, and speaker panning is sparse. The music and "action" is robust in the front channels, but there's no use of the subwoofer or even decent mimicry in the rear channels. It's a decent track, but hardly a sonic wonder.

Not really all that much, to be honest. The deleted/extended/alternate scenes total just slightly more than 45 minutes over all four discs, but it doesn't really add any new or hilarious jokes. The deleted family interviews are just more than 10 minutes in length, though eight minutes are on the first disc and serve to be slight extensions, more than anything else. Those cover the first three discs, with the other extras on Disc Four. 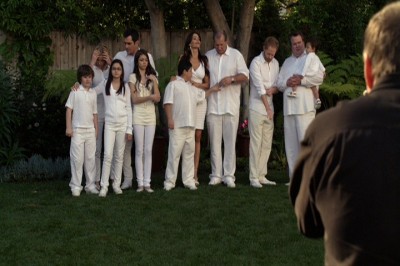 And on Disc Four, there's not too much, for that matter. A disappointing gag reel (5:41) shows more flubs and funny faces than providing real laughs, while the "Real Modern Family Moments" (10:24) include interviews with the cast and crew as they talk about what they incorporated into the show from their real lives. It's scary how a couple of them are dead ringers for their cast counterparts. "Fizbo the Clown" (4:13) features Stonestreet as he recalls actually doing the occasional appearance as a clown growing up. "Making of Family Portrait" (9:15) and "Modern Family Hawaii" (5:19) are the closest things to production featurettes for the show, and they're brief and forgettable.

I know what you're thinking; if I dislike the show, then why would I presume to rate it as I did? There are moments where it's good, but that's the ceiling for Modern Family as far as I'm concerned. Technically it's OK and from an extras perspective, it's almost like they started collecting material once they got a full-season episode order or something, so there's not too much cast and crew participation. Worth checking out to see what the fuss is about before making a decision to buy it (or check out the second season on air now).