20th Century Fox // R // October 19, 2010
List Price: $34.99 [Buy now and save at Amazon]
Review by Stuart Galbraith IV | posted November 7, 2010 | E-mail the Author
In many respects the ultimate cult film, The Rocky Horror Picture Show (1975) and the audience-participation / "shadow" performances it inspired is, truly, unique in the annals of movie going. A campy, sexually explicit ode to classic sci-fi and horror films satirizing and contrasting '50s-era American blandness with liberating sexuality, rock and roll and even the emerging punk scene, it began as a small-scale but quite popular London stage show (The Rocky Horror Show, 1973), and following mixed success in Los Angeles and New York it was adapted into a relatively low budget movie musical (negative cost: $1.2 million, a relative pittance).

The movie bombed when it opened in September 1975 but, beginning at the Waverly Theatre in New York the following April, it famously took on a new life as a midnight movie attraction, where audience members began interacting with the film, wearing costumes, and within a short time regular cast members in full costume lip-synched the entire picture, projected directly behind (and above) them.

I first saw Rocky Horror in the summer of 1978, not in a theater but surreptitiously acquired (not be me) on videotape, one of the first bootleg videos I ever saw. I was expecting something like a Mel Brooks-style parody of old monster movies and was startled but greatly entertained by what I saw; even without the audience participation it was plenty fascinating. The movie Fame (1980) featured a funny sequence where characters visit an accurately depicted New York screening of Rocky Horror, which in turn prompted my visit to a London movie house in 1982. To my disappointment, there was no stage show or audience participation - everyone quietly watched the film, like any other movie - but to my surprise the film ended quite differently with an entire song, "Super Heroes," at the very end along with different end titles.

I've since seen Rocky Horror a number of times with the "shadow" performances. I'm not a particular fan per se but I admire the casts' enthusiasm and the liberating freedom of expression such performances allow. (I do prefer the performances to all the shouting back at the screen.) The Rocky Horror Picture Show - 35th Anniversary* features "The Search for the 35th Anniversary Shadowcast" as an extra feature. Kind of a Rocky Horror riff (raff) on American Idol, I'd planned on merely checking it out for a few minutes for this review but ended up watching the whole show, fascinated, immediately after the movie. For these (mostly) amateur performers, Rocky Horror is an important part, even a defining part, of their lives.

The Blu-ray itself is quite good, offering as it does a decent 1080p transfer of both the U.S. and U.K. version, with myriad audio and interactivity options. Most or all of the extras from the earlier DVD have been ported over and there's a decent amount of new material. 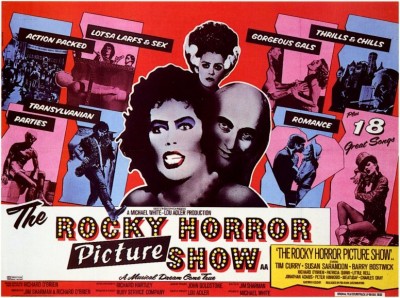 Newly engaged Brad Majors (Barry Bostwick) and Janet Weiss (Susan Sarandon) are lost in a thunderstorm when their car gets a flat tire. (Though the action supposedly takes place in November, on the car radio is heard Richard Nixon's resignation speech of August 8, 1974.) The rain-soaked couple makes their way to a nearby castle - played by Oakley Court, seen in innumerable Hammer horror films. They arrived chilled to the bone. (The actors were, too. You can see their breath in scenes both outside and inside the house.)

The master of the house is one Dr. Frank-N-Furter (Tim Curry), a vain, glamorous transvestite-scientist from another planet, though Brad and Janet don't realize this at first. A convention is held to honor Frank's success in unlocking the very secrets of life. With the help of handyman Riff Raff (Richard O'Brien, also the show's creator), a Dwight Frye-ish hunchback, along with his sister, Magenta (Patricia Quinn), a domestic patterned after Elsa Lanchester's Bride of Frankenstein, and Columbia (Little Nell [Campbell]), a groupie, Frank reveals his creation: mute muscleman Rocky Horror (Peter Hinwood).

A conceited Frank seduces both Janet and Brad, but when ex-delivery boy Eddie (Meatloaf), a former lover to both Frank and Columbia, reemerges from a deep freeze on his motorcycle, and after Rocky is found in bed with Janet, Frank becomes insanely jealous. He murders Eddie with an ice axe, shortly before Dr. Everett Scott (Jonathan Adams), Brad and Janet's former high school science teacher, arrives looking for his nephew Eddie.

The Rocky Horror Picture Show, like a lot of musicals, has a sensational first act, followed by a pretty good middle section, before becoming pretty aimless and ineffective by the climax. Once Frank deflowers the hero and heroine, the story pretty much stops dead though the songs and performances are good throughout.

It's hard to tell just what Rocky Horror wants to be. As a spoof of old movies it's not particularly funny, despite numerous references to old movies, especially in the film's title song, sung by O'Brien but featuring Quinn's red lips. The opening scenes, following the wedding of a friend Brad and Janet's friends, amusingly satirizes '50s blandness and sets up a stark contrast with the wild goings-on "over at the Frankenstein place" (as the song goes). Then as now the film is refreshingly, unashamedly out of the closet, with Frank-N-Furter strutting proudly like a peacock throughout, Curry's marvelous performance - part Joan Crawford-esque drag queen, part Maleficent from Disney's Sleeping Beauty (1959) - is a sight to behold.

These days Rocky Horror seems to attract the same sort of people drawn to other similarly obsessive but friendly and benign social fan bases: "Trekkies"/"Trekkers," trainspotters, Civil War buffs, horror movie fans. Initially however, Rocky Horror's first revivals primarily appealed to gays and transgender types who embraced the its encouraging message of "Don't dream it, be it." And yet this message seems to have resonated equally with introverted straight people, fans who through Rocky Horror have found an environment of like-minded people with whom they can truly express and be themselves.

Besides Curry, Quinn and Little Nell come off best in their colorful parts, and Meatloaf is sensational in his all-too-brief scene, which features a wonderfully authentic, retro rock song, "Hot Patootie - Bless My Soul." Erudite Charles Gray, as the on-screen narrator, is quite hilarious, a kind of British Criswell, stuffily delivering ponderous dialogue like, "It's true, there were dark storm clouds - heavy, black, and pendulous - toward which they were driving. It's true also, that the spare tire they were carrying was badly in need of some air, but they being normal kids and on a night out, well, they weren't going to let a storm spoil the events of their evening. On a night out - it was a night out ... they were going to remember for a very long time." 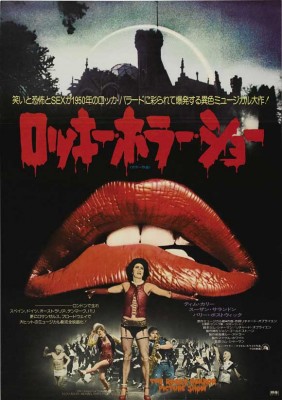 Filmed for 1.66:1 widescreen, The Rocky Horror Picture Show looks better than it ever has, though that's still somewhat limited. The picture is rife with process shots, especially vertical wipes and other old-fashioned transitional clichés found in serials and the like (and which briefly fell back into fashion after the release of Star Wars) These process shots tend to look much softer, but overall the presentation is a big step up from the standard DVD, which still had trouble with some of the reds and blacks, plus in high-def viewers can now freeze-frame things like the shots of Gray's "Denton Affair" manuscript, and read the various police statements therein.

Viewers can choose between the U.S. or U.K. versions. What's more, taking full advantage of Blu-ray technology, the disc includes additional viewing options listed under "The Midnight Experience" - options viewers can click on in any combination they choose. A 1983 callback track with subtitles includes the scripted dialogue commonly shouted back at the screen (almost non-stop). A "prop box" offers virtual props the viewer can "toss" at the screen, and there's the aforementioned shadowcast performance, featuring the crème de la crème, handpicked from the best shows in U.S. and Europe, which can also be viewed simultaneously. Finally, the film can also be played as originally conceived (though never released), with the opening scenes - everything prior to "Time Warp" - in black and white.

The 7.1 DTS-HD Master Audio is impressive, though I confess to listening to more than half the film in its original mono as it's my understanding home video versions use the stereo soundtrack album versions of the songs, which vary slightly. English, Spanish, and French subtitles are listed on the packaging, though my Japanese PlayStation 3 triggered myriad other language options, though not Japanese.

Beyond the "shadowcast" and other "Midnight Experience" features (described in detail above), there's also a pop-up trivia track; a karaoke lyrics feature available with and without the original vocal tracks; an interview with still photographer Mick Rock; and a poster and still gallery. All of this material in high-def.

In standard-def, most or all the material from previous home video releases, including deleted scenes, and alternate endings, trailers, and a retrospective documentary, about 70 more minutes worth of material in all.

Even with all this marvelous technology, the only way to really get the full Rocky Horror treatment is to catch one of the midnight screenings with the live show, still growing strong all these decades later. Who'd have thought it? As a movie, and a Blu-ray, The Rocky Horror Picture Show is Highly Recommended.

* The Marjorie Morningstar (1958) "35th Anniversary" laserdisc doesn't seem all that long ago.