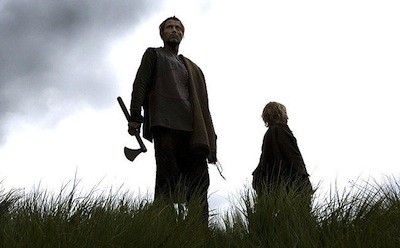 They say he was born in Hell, and his years on Earth have been fueled by hate. He is a slave and a gladiator, perpetually chained up, unleashed with just enough rope to take care of his opponents in a fight and maybe hang himself. He will beat you with his fists or a rock if it's handy. He will rip out your carotid artery with his teeth. They say he has never had a single master longer than five years, that's all they can handle.

They call him One Eye, and this is his cruel picture.

Valhalla Rising is the new film from Danish writer/director Nicolas Winding Refn (Pusher Trilogy, Bronson), and it is the dreamiest mud-caked, blood-soaked Viking picture you're ever likely to see. It stars Mads Mikkelsen, last seen playing the influential composer of Rites of Spring in Coco Chanel & Igor Stravinsky. He is our man One Eye, and his name is quite literal. The brute is deformed inside and outside, and he lives in a silent world of rage, forced to fight in bare-knuckle brawls.

One Eye is in the process of being sold, his owner (Alexander Morton) needs money to fend off the invading Christians. The fighter takes advantage of his new master's weakness and kills him. He takes off on his own with the man's young son (Maarten Stevenson) in tow. They hook up with a boatload of those aforementioned Christians as they head to the Holy Land for the Crusades. Only, the boat enters a strange mist and the sailors spend days on end trapped on a windless sea. When they emerge from the fog, they think they have returned to the damnation that spawned One Eye. This strange new land brings death and madness, causing the religious to question their faith and One Eye to question himself. 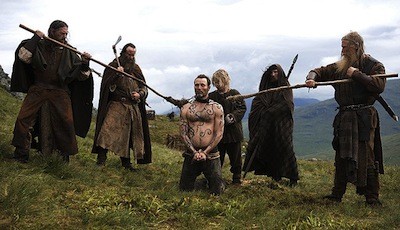 I would love to know what mad circumstance inspired a movie like Valhalla Rising. Under what conditions did Refn and co-writer Roy Jacobsen come up with this? Theirs is not your average Viking movie. Sure, it has fighting and killing, and whenever the violence does erupt, it's swift and brutal. Brains are bashed in, entrails are spilled, and if any of the survivors get blood on their clothes or skin, they don't bother to wipe it off. The muck and the gore is so vivid, the stench practically wafts off the screen. Mikkelsen is one tough bastard, and his wordless performance is fiercely realized. Imagine going to work every morning and thinking, "Right, whose skull will I cave in with an axe today?"

And then imagine his disappointment when the call sheet tells him that today is the day he will wander in the forest. Or sit on a boat. Or stack rocks. Because all of these things happen, too, and in a much greater quantity than the beating and the maiming. Refn has made a contemplative Viking movie, one that links the poetry of the wild to the ache of a man's soul. Or, depending on your interpretation, one that says Vikings had about as much nothing going on in their lives as the rest of us. If Refn's previous film, the ultraviolent prison movie Bronson, was an aesthetic séance of all things Kubrick, then Valhalla Rising is Refn's impression of Terence Malick choreographing the events inside Werner Herzog's subconscious. Man steps out into the wilderness in search of something greater than himself only to find out how small he really is. Hell, it even has some pseudo-Malick narration, though it's spoken out loud instead of being delivered in voiceover. Plus, Malick would have had the boy do it, not grown men. All of these film-school comparisons makes one wonder: What would a Nicolas Winding Refn film be like if Nicolas Winding Refn actually spent more time being Nicolas Winding Refn?

There is much to like about Valhalla Rising. Morten Søborg's photography is gorgeous, and the nightmares he conjures by way of One Eye's visions are as lurid and bright as the chilly landscapes are lush. The music of Peter Kyed and Peter Peter adds a moody undertone to everything, moving at a pace even more glacial than that of the film, stoking the dread that ripples beneath every scene. It's not really a boring movie, either, and though sometimes I think Refn mistakes standing around and staring at the sky for soul searching and/or visual poetry, I do think he has a tight grip on what he wants to do and doesn't spend too much time dawdling. Then again, that grip may be too tight. He could loosen his fingers and let a little more meaning drip loose. While this is not the big tease with no payoff that Bronson was, Valhalla Rising still could have amounted to much more than it did.

Even so, I think fans of historical action movies tired of the same old thing but still wanting at least a smidgen of the same old thing sprinkled into this strange new thing are going to dig a good portion of Valhalla Rising. And it's at least a hell of a lot smarter than its closest current competitor, Centurion (which I liked a lot less than our reviewer). If you need to see some guys in grubby armor slogging through the mud and disemboweling each other, Valhalla Rising is definitely the way to go. Well, unless you live near a comic book store, then you can just go get some issues of Brian Wood's super-awesome Northlanders, but that's grist for a whole other article....