Image // Unrated // November 16, 2010
List Price: $99.98 [Buy now and save at Amazon]
Review by Stuart Galbraith IV | posted December 7, 2010 | E-mail the Author
Hot on the heels of Season 1, released less than two months ago, comes The Twilight Zone - Season 2, with 29 classic episodes from the 1960-61 season (down from the previous year's backbreaking production slate of 36), in high-definition for the first time. While Twilight Zone's first season included some of the program's all-time best episodes ("Walking Distance," "Time Enough at Last," "The After Hours"), overall the first year was more cautious than later in the series, more in line with shows like One Step Beyond and Alfred Hitchcock Presents. It was as if creator Rod Serling wasn't confident that mainstream audiences would accept his wilder, more daring concepts. Episodes like "One for the Angels," "Perchance to Dream," and "Mirror Image," while generally quite good, didn't quite reflect that uniquely Twilight Zone spark that permeates the series' second year. Moreover, where year one was almost completely dominated by creator Rod Serling's original and adapted teleplays, year two features significant contributions from writers Richard Matheson and Charles Beaumont, adding a greater variety of both characters and tone.

Out of the 29 episodes, only four or five are below average; the rest are good to excellent and even the lesser ones have something to offer. Several episodes, notably "Eye of the Beholder," about a disfigured woman anxiously awaiting the results of her last-chance plastic surgery, and "The Invaders," about a backwoods woman tormented by doll-sized extra-terrestrials, are so famous they've entered that realm of pop culture iconography whereby even those who've never seen a single episode of Twilight Zone are at least aware of these particular episodes.

But more importantly the season features consistently solid, varied and often vastly underrated episodes, along with one or two overrated ones. More on this later. As discussed in greater detail in my review of The Twilight Zone - Season One, the big bump in picture quality justifies the cost of upgrading these shows from their already fine DVD versions. This set's new extras, on top of the mountain of previously-released material, is less interesting though an obvious effort has been made to give the viewer a lot of bang for his buck. 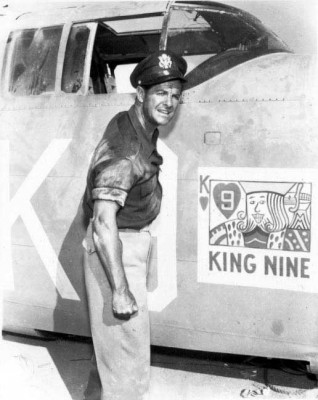 "King Nine Will Not Return"


Beyond the changes made to the opening titles, dropping Bernard Herrmann's music and replacing it with Marius Constant's iconic theme, the other distinguishing feature of season two is the use of videotape instead of standard 35mm film for six of the 29 episodes: "The Lateness of the Hour," "The Night of the Meek," "The Whole Truth," "Twenty-Two," "Static," and "Long Distance Call." It was a cost-cutting experiment that didn't pay off and through the years its use has almost universally been condemned. While the use of then-primitive and bulky video technology was limiting in some respects - most obvious in the soundstage car dealership "exterior" in "The Whole Truth," I'd argue that director Jack Smight in particular turned its technical limitations into creative advantages.

Beyond the widely-seen, Acknowledged Classics of season two - "The Howling Man," a superb show about a religious order that claims to have captured the Devil, and the aforementioned "Eye of the Beholder" and "The Invaders" - here are few other noteworthy episodes:

"Nick of Time" - This is a popular but undervalued masterpiece, in the series' Top Ten for sure, with superstitious William Shatner becoming obsessed with the predictions of a cheap little fortune-telling machine in the back booth of an ordinary diner. Pre-Star Trek, Shatner excelled at these kind of handsome but neurotic types on various anthology shows, here giving a superb, nuanced performance while Matheson's script is ingeniously ambiguous.

"The Silence" - This episode doesn't get much discussion either, probably because it's one of the handful of Twilight Zone episodes with no element of fantasy. But its story, about a gentleman's cub wager that its most pretentious, garrulous member cannot keep silent for an entire year, features a terrific performance by Franchot Tone and a marvelous O. Henry-like twist.

Three Videotaped Episodes - Though "Long Distance Call," with Billy Mumy on the hotline with his dead grandmother, is widely regarded as the best of the videotaped shows, I much prefer "The Lateness of the Hour," "Twenty-Two," and "Static," the latter two especially getting no respect. "The Lateness of the Hour," about a young woman (Inger Stevens) anxious to leave her overly protective parents and their household of robot servants, uses the claustrophobic and harshly intimate nature of early videotape to its advantage. It's a genuinely disturbing, skin-crawling episode. "Twenty-Two," about a stripper (Barbara Nichols) haunted by a recurring nightmare, is dismissed as an old yarn done better in the British film Dead of Night (1945) but I found it almost unbearably frightening as a child and, in sharp contrast to "The Lateness of the Hour," Smight's "opening-up" of the exterior scenes gets around the technical limitations of videotape while using it to add to the dread that hangs over this show from start to finish. I used to hate "Static," about an aging man (Dean Jagger) whose old radio picks up 30-year-old broadcasts, but it similarly takes advantage of the format - an unflattering but unflinching intimacy with the performer almost impossible with 35mm film - while Jagger delivers a beguilingly understated performance.

Looking back at these shows, I see that a common thread is stories featuring interesting/appealing character relationships rather than the usual bitter misanthrope with a chip on his shoulder the size of the national debt, a greatly overworked Serling stock protagonist.

"A Penny for Your Thoughts" - Rod Serling was as obsessed with milquetoast, nebbish types (usually in need of a guardian angel) nearly as much as overworked, unhappy white-collar executives, but it took writer George Clayton Johnson to nail that characterization down. In this charming show, Dick York stars as a mild-mannered banker who briefly gains the ability to read people's minds, along the way learning of a co-worker's (June Dayton) unexpressed crush.

"The Odyssey of Flight 33" - Cockpit verisimilitude and an authentic performance by Twilight Zone mainstay John Anderson as the pilot add to this engrossing story of a passenger jet lost in time.

"The Prime Mover" - A shaggy dog tale of telekinesis, starring Dane Clark and Buddy Ebsen as contrasting pals, with Christine White as Clark's long-suffering girlfriend. Its on-the-money casting and the actors' chemistry overcome its slight story, adapted by Beaumont from Johnson's story.

"Man in the Bottle": It's the old I'll-give-you-four-wishes-sucker story, but the central performances and character relationship of Luther Adler and Vivi Janiss as a middle-aged couple on the verge of bankruptcy make this episode appealing and memorable. Joseph Ruskin makes a sinister genie.

"The Rip Van Winkle Caper" - Another shaggy dog story, this one playing out in a favorite Twilight Zone setting, a scorchingly hot, lifeless desert. Sweaty Oscar Beregi and Simon Oakland steal a cool million in gold bricks, thinking they've outsmarted the law by hiding out in a dark cave in suspended animation chambers until the year 2061. More a throwback to E.C. Comic Books, it's nonetheless an enjoyable yarn.

"Will the Real Martian Please Stand Up?" - An unusually atmospheric, darkly amusing (and, ultimately, oddly downbeat) tale of a humanoid alien that has somehow slipped, unnoticed, amongst a group of bus passengers stranded at a diner after his (her? its?) flying saucer crashes into an icy lake. A fun show.

"The Obsolete Man" - Like John Anderson, Burgess Meredith top-lined four Twilight Zone episodes. In this one, Meredith is a librarian in a totalitarian society where books are outlawed, and thus is sentenced to death by sanctimonious judge Fritz Weaver. It's a bit too literal and preachy at times - ironically, when I first saw this back in the 1970s, they used to edit out its worst excesses, actually helping it - but the two lead performances are riveting, and the stark visual design is memorable.

There are a few. Everyone seems to love "Night of the Meek," another videotaped show with Art Carney as a pathetic drunk transformed into Santa Claus, but I find the show sloppily sentimental, badly acted, and visually ugly. And "A Thing About Machines" - Fussy Richard Hayden menaced by his household appliances, is a silly show with a grating central character. 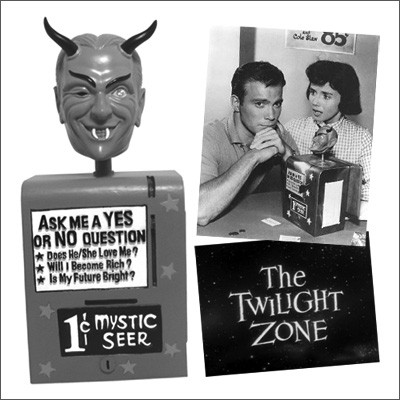 
As with Season 1, The Twilight Zone - Season 2 looks just wonderful in high-definition, pillar-boxed to 1.37:1, and the more ambitious, visually stylized episodes lend it even more to high-def than the first year. The uncompressed PCM mono audio is likewise strong, though in a few episodes I found "restored audio" option had the music track mixed too low and the dialogue track too high, and I often switched to the original mono, also included. The five discs are region "A" encoded. Menu screens are easy to navigate. Optional English SDH subtitles are included.

The main new supplement is an August 1953 episode of the anthology Suspense, "Nightmare at Ground Zero," written by Serling. Directed by Robert Mulligan it stars O.Z. Whitehead as a man who provides hand-made mannequins for atomic bomb tests. When his shrewish, paranoid wife (Louise Larabee) berates him as a failure he decides to slip her in with the mannequins at the Yucca Flats house scheduled to be vaporized later that morning. Featuring an instantly recognizable Pat Hingle and Lonny Chapman, it's a surprisingly effective - indeed, quite a suspenseful show - with one especially powerful scene near the end. The filmed-live, kinescoped program is in standard-def and includes several hilariously dated original commercials.

Also exclusive to the Blu-ray are 25 new audio commentaries by a batch of TV historians and music experts, a makeup similar to the group Image dug up for their earlier release of Thriller - The Complete Series. These are generally good but almost too much of a good thing: Did we really need four separate audio commentary tracks featuring six people on "Eye of the Beholder," for instance? Apparently older but previously unused interviews with Joseph Ruskin and H.M. Wynant are also included, as well as archival audio interviews by Zone historian Marc Scott Zicree with director of photography George T. Clemens and make-up artist William Tuttle. Additionally, there are previously unreleased episodes of the Twilight Zone radio series; and, best of all, isolated music scores for 22 of the 29 episodes. All or nearly all of the "Definitive Edition" DVD extras are included as well.

You can't lose with a show as good as this. Some may gripe about the high SRP ($99.98, though commonly marked down to around $60-70), but it wasn't long ago VHS copies of all 29 shows would have run you around $340, all told, via the old Columbia House subscription service. A great show with few missteps, and a DVD Talk Collector Series title.

This review is dedicated to William Shatner, H.M. Wynant and Fritz Weaver.