While I have been watching 30 Rock since the first season, I did not get a chance to come in from the ground floor/first episodes of it. However, in Season Two it was doing great work and in Season Three while they could be faulted for being not on their top form, they were still far above the rest. Having gushed about it as I have, one can sense in Season Four that there is a drop in form.

At first glance, the fault does not appear to lie with the players, as they remain the same from prior seasons. Tina Fey (Date Night) is Liz Lemon is still writer and producer of "TGS with Tracy Jordan," which stars Tracy Jordan (Tracy Morgan, Cop Out) along with Liz's longtime friend Jenna (Jane Krakowski, The Rocker). As the show runner, Liz balances the egos and eccentricities of the talent while ensuring the show airs. If it means an occasional fight with the network executive Jack (Alec Baldwin, My Best Friend's Girl) so be it, but the show follows the lives and adventures of her and her cast and crew, both on and off stage. 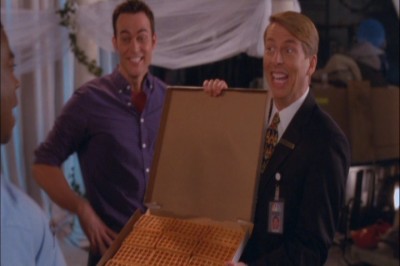 The core cast is more than capable of supporting the show, which gives them the luxury of flushing out the abilities of the supporting roles. Among the less visible cast that are given chances to shine are Kenneth (Jack McBrayer, Forgetting Sarah Marshall) the NBC page and Pete (Scott Adsit, The Informant!). But also given a bit more exposition in this season is Frank (Judah Friedlander, The Wrestler), the show's head writer. Along with their contributions are the subtle hints dropped about their character, whether it's Liz having a one-night affair with one of Tracy's entourage members or Kenneth's agelessness. They add an immediate identity to the characters and save a viewer the time of remembering who's who to some degree. So the cast remains strong, and the ensemble is also formidable, so what seemed to stick in my craw about Season Four?

I think that more than previous seasons, the show tended to focus a bit more on character and storyline advancement rather than settling for cramming as many jokes into a scene as possible. Liz still wanted to "have it all" both in career and family, and whether it was running into old flames like Drew (Jon Hamm, Mad Men) or Floyd (Jason Sudeikis, The Bounty Hunter), her journey seems to be beset by some cringe-inducing moments of self-sabotage or bumping into new ones When she bumps into Wesley (Michael Sheen, The Damned United), she sees the end of her quest and is not content with settling, and does what she can to avoid Wesley who (in Liz' defense) is the epitome of settling for someone you shouldn't have to. 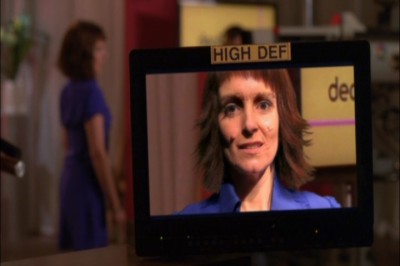 Then you have Jack. He's been wining and dining beautiful women from various income levels for the past three seasons, but in Season Four he's presented with two options that have their own merits; he can go for Avery (Elizabeth Banks, Zack and Miri Make a Porno), the young, attractive financial news reporter who shares many of Jack's current interests, or there's also Nancy (Julianne Moore, Chloe), Jack's longtime crush from Boston who is dealing with the final signs of a failing marriage. He tries to carry both relationships simultaneously for as long as possible until he's forced to choose. In a way, Jack's journey is the shows, whether or not you'd like to go for the character development or the jokes that mix in an Arrested Development eye towards continuity.

Perhaps that's where the show finds itself; they were putting out quality shows that were entertaining and hilarious in prime time on network television that, when they looked up, they realized where they were, and took Season Four as a chance to stop and smell the proverbial roses. Perhaps this season was their equivalent of Metallica's "Black Album." Or perhaps (as Noel Murray mentioned in his recent Onion A.V. Club piece discussing the excellent Arrested episode "Good Grief") the "creative exhaustion" that Arrested saw near the end of their show could be a bit more present in 30 Rock, and the latter might have "suffered some of the backlash" just for sticking around a fourth season and not being sure of what to do with itself. 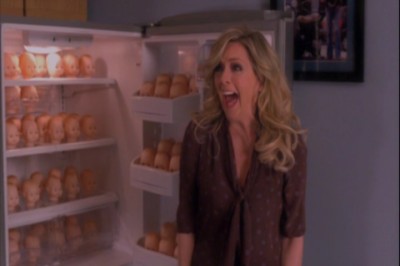 Whatever the reason, the fact remains that from a quality perspective, there were far fewer gems in Season Four of 30 Rock than in any other season since its first. One would hope that Fey and company have realized this (they seem to, as I'll mention in the supplements below) and can course correct the ship before the show becomes something of a parody of itself or worse, a shadow of what used to be funny on Saturday Night Live, which would make for a precipitous fall indeed.


1.78:1 anamorphic widescreen, consistent with broadcast. There isn't any edge enhancement that I could pick up and flesh tones are reproduced accurately, and the source material is clean as a whistle. It's definitely a step down from watching the original high definition broadcasts, but I'll take my Cheesy Blasters any way I can.


You get Dolby Digital 5.1 surround on the episodes and it sounds good; dialogue sounds strong, the underlying musical notes from Fey's husband (and show Executive Producer) Jeff Richmond provide a nice blanket of sound for the rear channels while the fronts give you all your sound and sound effects. A curious note though; the discs also come with a two-channel Dolby stereo track, but there's another English two-channel Dolby stereo track on many episodes too. I listened to them on the fly with the other tracks and couldn't tell what the differences were. Any thoughts?


30 Rock has ten audio commentaries on the 22-episode order for Season Four, hefty and a well-appreciated bump. Commentaries adorn the first two discs with the additional extras on disc three. The commentary listing is:

Back to "Stone Mountain" for a second; if Glover and Jacobs' names sound familiar, that's because they appear on Community (Glover also wrote for 30 Rock in Seasons Two and Three). They're an interesting inclusion, but really nothing more than a fan-based commentary. The other commentaries are pretty quick and don't reveal a lot of information, but the McBrayer and Hamm commentary is worth a listen for the general goofiness. 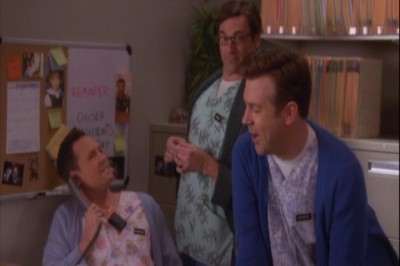 Moving on, the big extra here is the Food Network show "Ace of Cakes," where the crew from Baltimore's Charm City Cakes created a couple of cakes for "I Do Do" and the season's wrap party in an episode (20:30). For those unfamiliar with the show, picture your cool tattooed uncle and his friends making cakes, but they're a friendly capable bunch, and they are all show devotees, even performing quick tributes to the show during the episode. The head of the shop even makes real cheesy blasters (replete with chopsticks) as a surprise to the cast. It's definitely a show worth seeing if you haven't. Past that, there are two separate behind the scenes looks at "The Moms" (7:03) and "I Do Do" (5:22), which include cast and crew interviews, inspirations for scenes and the guest stars get interviewed here and there. You don't really learn anything new from them, but they're nice to have. Nine deleted scenes (5:58) provide more quick laughs but little in concrete usefulness, and the full "Tennis Night in America" song is next (1:02), along with a stills gallery to round things out. There are extended versions of "Secret Santa" and "I Do Do" here too, but they would appear to be consistent with the odd 40-minute broadcast episodes NBC was experimenting with in the season.


With the emergence of other comedy shows on the scene combined with a dip in form from previous seasons, 30 Rock appears to be drifting back closer to the pack in its fourth season. There are laughs, there are guest appearances galore, but they don't appear to be nearly as consistent (or as funny) as they were in prior years. There's a few more supplements here that are nice for fans of the show, but for newbies I'd start with the earlier seasons before throwing yourself into the crevasse.