Blue Underground // Unrated // March 1, 2011 // Region 0
List Price: $29.98 [Buy now and save at Amazon]
Review by Stuart Galbraith IV | posted February 26, 2011 | E-mail the Author
Nineteen seventy-one was a busy year for horror cinema. According to the Phil Hardy-edited Encyclopedia of Horror Movies more than five-dozen new horror movies were in release that year. One in five were vampire stories, most of those taking advantage of newfound permissiveness brought by changes to the BBFC in Britain and the recently established MPAA in America. Competing in a dwindling, increasingly marginal horror film market, producers around the world upped the ante in both sex and violence.

In the midst of all this came Daughters of Darkness (Le Rouge aux lèvres), a Belgian-French-West German co-production whose understated stylization - this despite its constant undercurrent of sadism, domination-submission, and flashes of graphic violence - is the source of its appeal. The author of the entry in Phil Hardy's book likens star Delphine Seyrig's character to Marlene Dietrich and the film to Dietrich's collaborations with Josef von Sternberg, a reasonable comparison. It's also adult and ambitious instead of juvenile, desperate, and exploitative like too many early-'70s vampire films.

The picture had been released to DVD multiple times, first by Anchor Bay in 1998, then by Blue Underground in 2003, and again in 2006 and 2008. I somehow missed all those various releases but based on standard-def clips from the film excerpted in the older features included here, this new high-def transfer is absolutely gorgeous, among the label's best-looking Blu-rays so far.

Beyond the recycled extra features, the disc includes an unexpected treat not at all emphasized in the packaging: a 101-minute bonus film, The Blood Spattered Bride (La novia ensangrentada, 1972) a Spanish variation on Le Fanu's Carmilla and which has similar story elements. That film is in 16:9 enhanced standard-def, not 1080p, but that's okay. It's a minor if moderately ambitious film - previously released to DVD by Blue Underground in 2000 and 2008 - better positioned as an extra feature than as a stand-alone title. 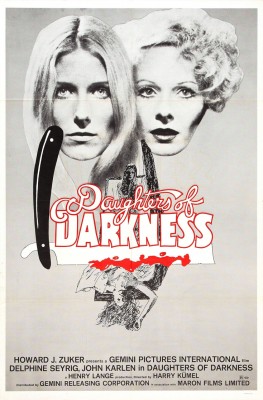 In Daughters of Darkness, a young couple on their honeymoon, Stefan (John Karlen, Dark Shadows) and Valerie (Danielle Ouimet), check into a grand but completely unoccupied hotel - it's the middle of winter - on the Ostend seafront in Belgium. Stefan is acting strangely, doing everything possible to put off introducing the new bride to his mother back in England. Rather than catch the next ferry, he pushes her into staying at the hotel for a few days, slipping concierge Pierre (Paul Esser) some money to pretend the mother isn't answering Stefan's overseas calls.

Meanwhile, as newspaper headlines follow a string of serial murders against beautiful young women, Hungarian Countess Bathory (Seyrig, Last Year in Marianbad) and her dark-haired, proto-Goth companion, Ilona (Andrea Rau), arrive at the hotel. The concierge is amazed: the countess looks just as she did 40 years before on a visit when he was but a young bellboy. The countess, despite sporting a hairstyle, fashions, and an antique Bristol automobile of 40 years past, insists he's mistaken, that perhaps he saw her mother instead. However, it's immediately clear to the audience that she's ageless. Eyeing the young couple in the hotel's dining room, she coolly sets her sights on seducing the young bride. Meanwhile, obviously threatened by the countess's moves, a heretofore-unknown abusive side to Stefan's personality begins to emerge, horrifying Valerie even more than the Bathory's attempts to seduce her.

The casting of Seyrig alone is emblematic of Daughters of Darkness' ambitions and occasional art house pretentiousness. Though it bears some similarity to other lesbian vampire films from the period - and, boy, there were a lot of those in the early-1970s - it's far removed from the blood-and-thunder thrills of The Vampire Lovers (1970) or crass sexploitation aims of movies like Lust for a Vampire (1971). Not much happens and the characterizations are extremely low-key but amusing and believable, with the countess gently prodding her way into the souls of Stefan and Valerie.

The film has some nudity, but it's all fairly justified dramatically, as are the short flashes of graphic violence. The real draw, though, is the unique atmosphere generated by director Harry Kümel and cinematographer Eduard van der Enden. The ornate hotel, in fact several locations seamlessly cut together suggesting one, is isolated and foreboding; I wonder if Stanley Kubrick watched this before making The Shining? The seaside exteriors are cold, lonely and unpopulated. The superb high-def transfer goes a long way to impress its dream-like qualities upon the viewer.

Presented in its original 1.66:1 format on an all-region disc (with modest black bars on the sides) Daughters of Darkness is a stunner. The film relies heavily on its graphic-novel-like imagery: the countess warming Valerie in her cape on a hill just before dawn, the wide angle shots of the isolated, ornate hotel. The colors are spot-on, the image is impressively sharp, and kudos especially to whoever did the color timing; all the nighttime and pre-dawn scenes look exactly right.

Unusual for a multinational Euro-horror film, despite the French, Flemish, German, and American cast everyone speaks English throughout, and the live sound captures their only slightly accented performances well. Husky-voiced Seyrig, apparently a lifelong chain-smoker, comes off especially well.

Audio is 1.0 DTS-HD Master Audio in both English and French (it's not clear which if any of the original cast dubbed the French version). English, French, and Spanish subtitles are available, including separate English subtitles for the French-dubbed version. The Spanish cast of The Blood Spattered Bride are clearly mouthing their lines in English, and only the English-dubbed version of that film is available.

Supplements are identical to earlier releases. Included are two audio commentary tracks, the first with Kümel and the other with John Karlen, moderated by David Del Valle. Kümel and co-writer/co-producer Pierre Drouot discuss the film while visiting the "Locations of Darkness," a terrific extra feature. Ouimet and Rau are interviewed separately, in "Playing the Victim" and "Daughter of Darkness," respectively. A theatrical trailer appears reconstructed from the new transfer, with original U.S. distributor info tacked on at the end. The Blood Spattered Bride isn't half as good and at 101 minutes a good two reels too long, but it makes an appropriate co-feature.

Straddling that uneasy no-man's-land between art and exploitation and, in its initial run, probably pleasing neither audience, Daughters of Darkness has enjoyed a deserved Renaissance in recent years and looks better than ever on Blu-ray disc. Highly Recommended.