Shout Factory // R // December 7, 2010
List Price: $19.93 [Buy now and save at Amazon]
Review by Stuart Galbraith IV | posted December 22, 2010 | E-mail the Author
Shout! Factory's ongoing line of Roger Corman-produced exploitation films continues with two above-average offerings: Crazy Mama (1975), an early film from director Jonathan Demme, and The Lady in Red (1979), written by John Sayles. Each is derivative, the former taking its title from Corman's Bloody Mama and Big Bad Mama, with other elements partly derived from American Graffiti. The more original The Lady in Red has some roots in earlier Corman films like Machine Gun Kelly and The St. Valentine's Day Massacre but may have chiefly been inspired by AIP's (not Corman's) successful Dillinger (1973). Cloris Leachman, the star of Crazy Mama, played brothel madam Anna Sage in that, the same part played by Louise Fletcher in The Lady in Red. Small world.

Each film rises above its main function as commercial exploitation. Crazy Mama is quirky and kitschy with an interesting cast and it frequently shifts gears in weird and almost wonderful ways, while The Lady in Red is bleaker and unexpectedly polished, more like Days of Heaven than the average New World film.

Shout! Factory crams both movies onto a single-sided, dual layer disc. The source elements are a bit rough - both look like 35mm theatrical prints rather than new inter-positives and Crazy Mama is, surprisingly, preceded by a UCLA Film & Television Archive logo, meaning that it presumably was sourced from their collection. Worthwhile audio commentaries and other goodies are included, including a "grindhouse experience" option. 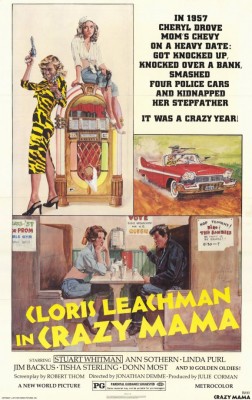 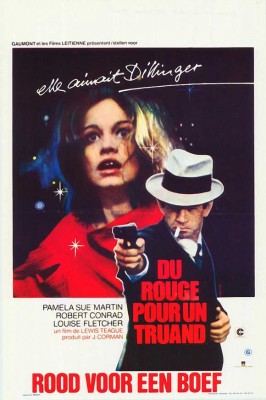 Crazy Mama attempts to do for the 1950s what Big Bad Mama did for the '30s, imitating but also subverting the bittersweet nostalgia of American Graffiti - complete with wall-to-wall oldies on the soundtrack - into something more campy along the lines of John Waters's films. (Co-star Ann Sothern, quite bloated by this time, even resembles Waters regular Divine.) Cloris Leachman stars as Long Beach, California hairdresser Melba. Evicted from her beauty salon (by Jim Backus, in a brief role), Melba, along with her mother, Sheba (Sothern, in fact just 17 years older than Leachman), and teenage daughter, Cheryl (The Office's Linda Purl), decide to drive cross-country to Arkansas to reclaim the old family homestead.

Along for the ride are Shawn (Happy Days' Donny Most), a surfer who got Cheryl pregnant*; Snake (Bryan Englund), Cheryl's current boyfriend, a leather-clad biker-type; and octogenarian Bertha (Merie Earle) - I'm not sure where they picked her up. In Las Vegas, the gang meet Jim Bob (Stuart Whitman), an unhappily married sheriff from Texas; married or not, he and Melba have a torrid affair (she even shampoos Whitman's hairy eyebrows) and decide to get hitched.

They also begin a minor-league crime spree, robbing grocery stores and the like. Oddly, they don't attract too much attention from the law at this point. Later, they decide to pretend to have kidnapped Jim Bob, calling his wife (Sally Kirkland) down in Texas and demanding a huge ransom.

Though set less than 20 years in the past, Crazy Mama is much less authentically period than Big Bad Mama or, for that matter, The Lady in Red, both set during the Great Depression. Contemporary vehicles are visible in some long shots, and the costumes, makeup, and hair seem more '70s to me. The actors, however, really seem to be enjoying themselves, and this enjoyment is successfully passed along to the audience. The film meanders aimlessly but amiably, with interesting and offbeat ideas: During a bank robbery Melba fires off a gun pointed at the ceiling but a bullet ricochets, hitting an innocent bystander, which genuinely upsets the amateur felon. There's an amusing running gag involving Burma-Shave and the extensive stunt work is impressively hazardous-looking, especially during the jarringly apocalyptic climax.

Though obviously not filmed much outside of Los Angeles County, the locations are nonetheless interesting, including Red Rock Canyon and a '50s-style motel of Indian wigwam units.

The Lady in Red doesn't much resemble the usual New World film. Despite the expected violent shoot-outs, cathouse antics, and women-in-prison nudity, all of it is dramatically justified and not at all gratuitous. Polly Franklin (Pamela Sue Martin) is an ordinary girl trying to survive the harshest years of the Great Depression. She works in a sweatshop where its nasty foreman (Dick Miller) openly sexually assaults his all-women workers, and has Polly's Jewish friend, Rose (Laurie Heineman, very good), arrested as a Bolshevik. Polly later goes to work at a dance hall where she stands to make just five cents a dance - until the other girls clue her in on where the real money is: prostitution. She lands in jail and is reunited with Rose, but a cruel jailer, "Tiny" Alice (Nancy Parsons), makes life miserable.

Polly pays Tiny off to secure an early release, going to work for high-class madam Anna Sage (Louise Fletcher, who must have had a terrible agent, this supporting part in a small-budget film coming so soon after One Flew Over the Cuckoo's Nest). There she becomes friendly with triggerman Turk (Robert Forster, unbilled) and is menaced by mobster Frognose (Christopher Lloyd). Robert Conrad, as John Dillinger, is second-billed but doesn't turn up until quite late into the film.

Unexpectedly good, The Lady in Red reflects Corman's obvious fascination with the Great Depression and the dire conditions of the working poor, especially women, and the humiliation they endured in order to survive, particularly the handful that refused to take poverty and injustice lying down (so to speak, in her case). Polly's an interesting character, one that picks and chooses her battles, and Pamela Sue Martin's intelligent performance shows her internalized deliberations at work. Polly's friendship with Rose is also interesting and Heineman's acting style is reminiscent of another longtime Corman associate, Luana Anders.

Besides Sayles's contribution, James Horner wrote the score, adapting many period songs, especially "42nd Street," which figures prominently in the story. Director Teague had been an editor on Crazy Mama.

Both films are presented in 1.78:1 enhanced widescreen (adapted from their 1.85:1 release versions) on one single-sided disc, and both generally look quite nice considering both seem derived from 35mm theatrical prints and have their share of scratches and other blemishes. The region "1" encoded disc offers English mono tracks only with no subtitle options; audio is fine, though.

Beyond the aforementioned "grindhouse experience" option, with trailers and a few drive-in ads tossed in, the set includes several audio commentaries: Jonathan Demme and Roger Corman on Crazy Mama, who also appear in an on-camera interview that turns mostly into a discussion about Silence of the Lambs and Corman's unmade Robert E. Lee movie; one with director Lewis Teague and Robert Forster on The Lady in Red, along with a second track featuring producer Julie Corman (Roger's equally hard-working wife) and John Sayles. Trailers and TV spots are also included.

*Nevertheless, Cheryl smokes throughout the picture, definitely politically incorrect in 2010.