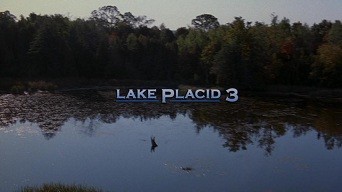 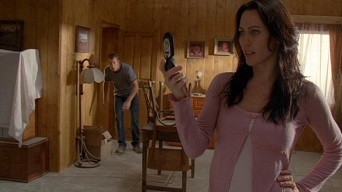 One of the first movies I reviewed for DVD Talk nearly 3 years ago was Lake Placid 2, a by-the-books SyFy Channel production that lacked most of the charm the original 1999 theatrically-released feature had (not to mention that it also lacked the participation of obscenity-throwing Betty White). The original involved two giant crocodiles menacing a woodsy Maine location. In that review of Lake Placid 2 (which involved more giant crocodiles than the original, this time cheaply and unconvincingly rendered with CG), I made a comment about how a Lake Placid 3 seemed to have been set up by that movie's makers. Well, the only surprise with Lake Placid 3 is that SyFy waited three years to churn out this obligatory second sequel. And like its predecessor, Sony is releasing the film on DVD in an Unrated edition, with additional gore and nudity scenes not seen on the cable channel.

To be honest, Lake Placid 3 isn't horrible; it just lacks anything distinguishable from the hundreds of other cheaply-made creature features that have populated the home video market and the SyFy Channel's Saturday afternoon programming for the last dozen years. As such, it sports a gaggle of stock characters, and unconvincingly-rendered CG creatures periodically pop up to consume secondary characters.

In this go-round, the main character is Nathan Bickerman (Colin Ferguson of SyFy's Eureka television series), an EPA specialist who inherits his mother's house (the Cloris Leachman character from Lake Placid 2) after she dies. Nathan has a wife and son - and in a clichéd but necessary scene early in the film, it's established that cell phone reception is spotty at the house. Yes, this is another horror flick where cell phones work perfectly fine until someone needs to call for help, when all of a sudden the signal is no longer available. In any case, the crocodile spawn from Lake Placid 2 are alive and thriving, thanks to Nathan's son who feeds them over the course of the next two years without anyone knowing. The crocodiles become enormous and devour the local wildlife until they decide to start chomping on humans.

And so the film introduces a dozen or so minor characters for use as crocodile fodder. Mostly, they're either nubile teenagers out on a hiking trip or poachers being led by the most ridiculous character of the bunch, Reba (Yancy Butler), a no-nonsense type who gets to spill the film's only funny lines as she fends off crocodiles. Long-time character actor Michael Ironside is also along for the ride as the local sheriff.

It takes a long while for this movie to pick up steam, but I will admit the last 30 minutes or so offer up some entertaining creature feature mayhem. Writer David Reed and director G. E. Furst cut between three parallel plot threads as the film heads toward its resolution (the teens, the poachers, and Nathan's family), and this keeps things moving and interesting. The action is fairly mobile, as the crocodiles attack both on land and in the local lake (not Lake Placid itself, a joke that gets used in the original film but not returned to in this sequel). Plus, a scene where Nathan's wife arms herself with a chainsaw to go after a giant crocodile was so thoroughly ludicrous that it merited a chuckle.

All of this was enough to warrant a Rent It suggestion for those who are fans of this type of fare. 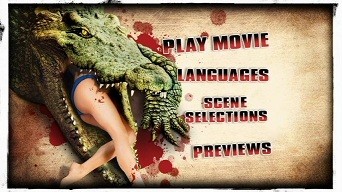 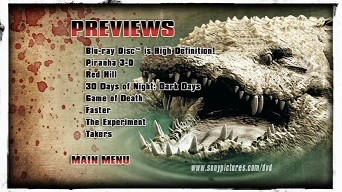 Sony gives Lake Placid 3 an anamorphic widescreen presentation with a 1.78:1 aspect ratio. Colors and details are strong, and the overall image quality is sharp.

Lake Placid 3 has no fewer than five language tracks: English, French, Spanish, Portuguese, and Thai. All are Dolby Digital 5.1. The English language track is the default. The dialogue, score, and sound effects are well-mixed and suitably strong. Optional subtitles are available in English, English SDH, French, Spanish, Portuguese, Chinese, Korean, and Thai.

I guess the plentiful language options on this disc help explain the relative lack of extras. A Previews sub-menu offers access to an ad for the blu-ray format and trailers for Piranha 3D, Red Mill, 30 Days of Night: Dark Days, Game of Death, Faster, The Experiment, and Takers. The first three automatically play before the main menu when the disc is first inserted into the player. And that's it - no Lake Placid 3-specific extras here.

Barely distinguishable from the hundreds of other low budget creature features seen on home video and the SyFy Channel over the last decade, Lake Placid 3 goes through the obligatory motions of stock characters and unconvincing CG crocodiles - though its final 30 minutes provide enough energy at least to warrant a look. Rent it, if you're curious.