The same might be said for Jack Bauer (Kiefer Sutherland). All he wants to do is quietly move to Los Angeles with his daughter, her husband, and their grandchild, but no-o-o-o-o-o. Within 24's first few hours, hapless Jack is at the center of a plot to assassinate the leader of a (fictitious) Middle Eastern nation while that country's revolutionaries plan to acquire highly-enriched nuclear fuel rods from the Russian mafia. By hour seven Jack's already been tortured with electrified jumper cables, stabbed by his partner (that barely fazes him), beaten by a hotheaded cop (having wandered in from The Wire), shot at, is nearly blown up in a helicopter and more.

Like it says on the box, 24 - Season 8 is The Complete Final Season. There was a sharp drop in the ratings this final year, though the decision to end the series seems to have been mutual and even cordial, and plans for a feature film adaptation are being discussed. In any case it's as good a time as any to end the show. It has varied precious little over the course of its eight seasons - it's practically the same show every season, though that's not necessarily a complaint; audiences didn't seem to mind, any more than the repetitiveness of James Bond, Dirty Harry, or Zatoichi.

Season 8 has all of 24's plusses and minuses front and center, in yer face. The serial-style format - with 24 hour-long "chapters" telling a single large narrative (albeit with myriad subplots) unfolding more or less in real time - remains highly watchable with its supremely effective cliffhanger endings, just like the old Republic chapterplays. It's also handsomely produced, looking much more like a pricey movie than a TV show.

But it's also often supremely stupid - gratingly so, with outrageously unbelievable plot machinations and, at times, plot twists that at times play almost arbitrary. For years the show was criticized as a neo-conservative fantasy come-to-life, populated with racial and religious stereotypes and a hero whose relentless torture of suspects always yielded results vital to America's safekeeping, and thus always justified.

Such complaints almost seem beside the point as 24 has in recent years become a kind of cartoon no one takes too seriously. Instead of abetting the normalization of torture and other controversial neo-con causes, 24's influence quickly eroded as the show collapsed into the realm of self-parody. It's hard to take seriously a political thriller in which every television monitor in New York seems to be tuned into Fox News, including all the sets at the U.N. itself. 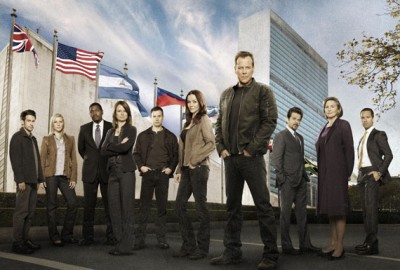 Having survived the deadly radiation poisoning he was exposed to during Season 7, Season 8 finds Jack Bauer in New York, hoping to catch a late flight to Los Angeles with daughter Kim (Elisha Cuthbert), her husband and their daughter. At the last minute, however, Jack is compelled to deliver to Counter-Terrorist Unit (CTU) headquarters an old nemesis claiming to have information about an assassination plot against President Hassan (Anil Kapoor). Hassan's Islamic Republic of Kamistan, more or less standing in for Iran, is presently brokering a peace accord with U.S. President Taylor (Cherry Jones), an agreement that includes Kamistan abandoning its nuclear ambitions.

Jack's involvement deepens when old colleague Chloe (Mary Lynn Rajskub) has concerns about the plot that CTU director Brian Hastings (Mykelti Williamson), 24's pig-headed director, the kind of character cliché virtually a requisite on this series, is choosing to ignore. Moreover, when the plot thickens and Hassan's brother and chief-of-staff, Farhad (Akbar Kurtha), is early on revealed to be behind the plot and now plans on acquiring nuclear fuel rods from Russia godfather Sergei Bazhaev (Das Boot's Jürgen Prochnow), Jack's one-time colleague, troubled and disgraced former FBI special agent Renee Walker (Annie Wersching), is brought in to work the case.

This last season of 24 is slick and exciting, but it's also unbelievably stupid at times. This is most obviously exemplified by an absurd subplot involving glamorous CTU data analyst Dana Walsh (Katee Sackhoff, Battlestar Galactica's Starbuck), who's carefully guarded past as an ex-con is threatened when her physically abusive former boyfriend (Clayne Crawford) shows up at CTU's front door. He blackmails her into helping him with a "big score"; using CTU's resources, she reluctantly helps him and his equally unappealing partner steal $120 grand from an NYPD evidence locker.

After creating such a strong, assertive character on Battlestar Galactica*, it's a little depressing to see Sackhoff playing such an unbelievably stupid, malleable and weak-willed one here. (She's also costumed badly; her data analyst looks more like a presenter at the 62nd Primetime Emmy Awards.) It's a predictable "B story" with an inevitable outcome - including her character's secret-secret identity. As has been the case with such characters since 24's very first season, the Big Twist involving her character makes utterly no sense at all. Moreover, fate of the world be damned, half of CTU gets swept up in what amounts to juicy office gossip.

Season 8 rigidly adheres to 24's proven formula, with all the familiar components in place: the obnoxious CTU/FBI director, who to protect his own neck maddeningly dismisses the concerns of Jack and Chloe; the time-killing middle-of-the-night hours, played out in nondescript back alleys and warehouses with all the energy of the Jerry Lewis Telethon at 4:30 am; the stop-at-nothing main villains, who unhesitatingly kill as many of their own men as government agents; perpetually pouty working-class data analyst Chloe, swimming upstream against better-dressed co-workers that undervalue her skill, etc., etc.

The Muslim extremists - most, played by Indian rather than Arab actors - are tired clichés: The ruthless extremist younger brother, the paranoid president, the virginal daughter straight out of 1001 Arabian Nights. The Russians are similarly painted in broad strokes: equally ruthless, pocked-faced borscht-eaters with appalling taste in clothes.

Amidst all this are a couple of good ideas: Renee Walker in Season 7 initially was appalled at Jack's unhesitating use of torture until, at a critical moment, she turns to the Dark Side herself. Season 8 finds her even more a loose cannon than Jack; in an early episode she clamps a suspects hand in a vice and cuts off his thumb with a power saw, as Jack looks on in horror. That Jack may finally be reaping what he sowed is one of this 24's few surprises, and Wersching is excellent in the role.

Filmed in Super 35, 24 has a gritty, sometimes deliberately grainy look that suggests a theatrical thriller rather than series television. The show looks great throughout, and like the 5.1 DTS-HD Master Audio up to contemporary industry standards for a show like this. My one complaint is the many green-screened backgrounds - nearly everything was filmed in Los Angeles, sometimes obviously so - tend to look a bit over-baked. Predictably, the sound effects track is a treat, with a lot of power and directionality in every scene. The region "A" encoded disc offers optional subtitles in English, Spanish, and French.

Supplements are standard stuff for an internationally popular franchise such as this - here in Japan 24 practically gets its own aisle at rental shops - with the usual deleted scenes and extended (though not by very much) episodes, and behind-the-scenes featurettes, the main ones focusing on the slick CTU set, which had me wondering if Fox News would approve of tax dollars wasted on all that expensive-looking furniture; and another on the "virtual New York" created for this season's shows.