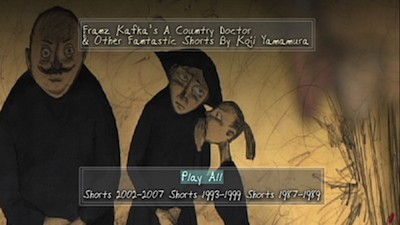 Franz Kafka's A Country Doctor and Other Fantastic Films by Koji Yamamura is a collection of animated shorts by experimental Japanese filmmaker Koji Yamamura. It contains what is probably his best-known work, "Mt. Head," a cartoon nominated for the best Animated Short Oscar in 2002. This, in many ways, is the middle point of Yamamura's work, even if it isn't exactly the center chronologically. The 13 programs presented here span from 1987 to 2007, arranged in reverse order, though also broken into chunks by decade. How you choose to explore is up to you.

"Mt. Head" is representative of the most compelling of Yamamura's work. It follows the travails of a miser whose stinginess causes a cherry tree to sprout from the top of his head. At first he fights it, but eventually he accepts it--only to have even more things begin growing around it once he does. The drawing style for "Mt. Head" is reminiscent of the color-pencil look of Bill Plympton, with the backgrounds having a hazy shimmer around the edges not unlike the Vaseline smear of dreams. Angles aren't so much exaggerated as bodies are stretched and inflated to create the appearance of an off-kilter perspective. This is also evident in the surreal Kafka adaptation. Removing the surrounding prose from "The Country Doctor" for his 2007 film, Yamamura exposes the odd skeletal structure at its core. The result is strange and inexplicable. Both films also show the director's fascination with traditional Japanese storytelling, including a theatrical chorus and antiquated instruments.

The odd thing about the backwards chronology on Franz Kafka's A Country Doctor and Other Fantastic Films is that the evolution goes the other way, and so it's hard sometimes to tell how a stylistic shift fits into the scheme of Yamamura's work. For instance, the second film we see, "Child's Metaphysics" (2007), is more in line with the shapeshifting freeform style of mid-period films like "Bavel's Book" (1996) and "Kid's Castle" (1995). Yet, the third film, "The Old Crocodile" (2005), has the look and narrative structure of a kid's storybook, an odd exception that doesn't really work. Visually, it stands apart from everything else, though thematically it fits Yamamura's interest in story and the imagination. "Bavel's Book," for instance, follows two boys as the contents of a book they are reading are so vivid, they are sucked into the scenarios described. "The Old Crocodile" is more baffling for the fact that it just doesn't work. It's not interesting to look at (the only time you can say that on this disc), and the story is pretty blah. 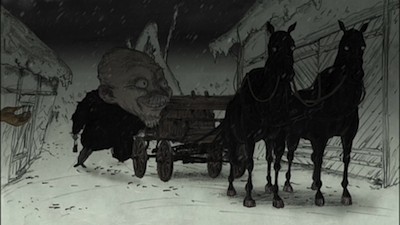 The flights of fancy and the a playfulness that Yamamura's cartoons showcase have a child-like quality, even when they are dark and weird, and so it's no surprise that Yamamura got along with children. His 1999 short "Your Choice!" was made in collaboration with young students in America and Japan. The story has the breathless quality of a child's anecdote, mining its own peculiar internal logic. Likewise, the art borrows from the youngsters' drawings, including using crayons to illustrate the backgrounds.

Capturing that essence of childhood is presumably the aim of "Kipling Jr." (1995), which marks another shift: namely, Yamamura's use of claymation. It's cute, if rudimentary, but the shapeless day of a little dog wandering around and the near-atonal gibberish of the soundtrack grow tedious. (At 15 minutes, it is the second longest cartoon, right behind "The Country Doctor," which is 21 minutes). Even more ho-hum are the three films in the Karo and Piyobupt series from 1993. Again, this is simple claymation, featuring cute characters that owe more than a small debt to the design of the Moomins, but not much happens in the shorts. They seem little more than a showcase for the stop motion. The style regresses further for "Perspektivenbox" (1989), combining clay, cut-outs, and traditional animation. It's a visual amuse-bouche: 4 minutes of airlessness.

It makes one wonder if maybe the backwards order is to bury the least impressive material, to lead with the successful work so that we keep watching. I could envision a lot of folks clicking off if it was the other way around. That's also perhaps why the one film shown out of order, "Japanese-English Pictionary" (1989), is saved for last. It ends the disc on a creative high. The whimsical short runs through the alphabet, playing a sort of visual word association, showing us each word in Japanese and English. It's like an extended Sesame Street short, with a poignant 3/4 mark and an amusing finish. It shows that Kimamura's work is stronger when he has a solid idea and isn't just farting around with cool pictures. 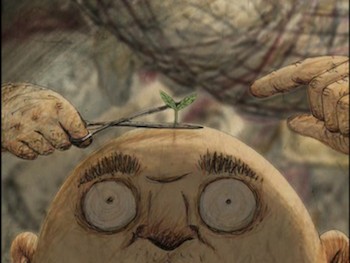 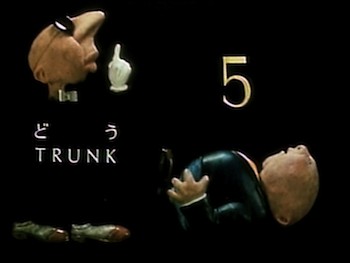 Video:
Aspect ratios depend on the film. Some are widescreen, some are full frame. For most of the disc, the presentation is very good, with vivid colors and a clean surface image. There is some interlacing, but it's minor early on, only increasing as we get deeper into the older films. Clearly the source material is different for each one, and less well-preserved as we dip into the 1980s. Expect more digital noise and print damage the longer you watch, though never to such a degree that it hurts the viewing experience. The worst by far is "Pictionary," which has a flicker that pops up intermittently.

Sound:
Most of the cartoons are in Japanese, though "Your Choice!" and "The Old Crocodile" are both in English. The Japanese-language films have English subtitles. Many actually have no dialogue, and music is important in all the shorts. The Dolby mix emphasizes the power of Yamamura's soundscapes, presenting an even mix that has a lot of forward thrust and creates big tones without distortion.

Extras:
The only extra is an essay by J-Film Pow-Wow's Chris MaGee printed inside the DVD cover.

FINAL THOUGHTS:
I wanted to like Franz Kafka's A Country Doctor and Other Fantastic Films by Koji Yamamura more than I did, particularly as it starts strong with the Japanese animator's post millennial work--including the title film and also his Oscar-nominated "Mt. Head." The earlier material is inconsistent, though, refusing to adhere to one style and usually without much in terms of narrative structure. While in some ways this freeform expression is Yamamura's strength, it is also his Achilles Heel. Maybe about half of the pieces here hit the mark, while the other half are rather dull. In terms of repeat viewing, it would be the kind of compilation where you'll end up picking and choosing rather than watching it all the way through, so you'd do best to Rent It. 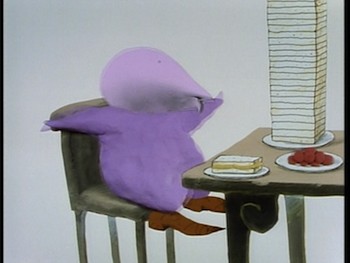 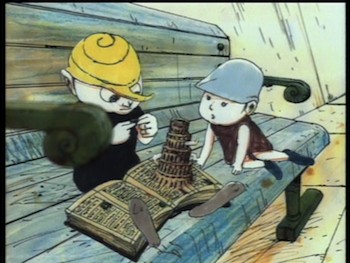