Fire on the Amazon

The film is a real anomaly, Serious Drama from producer Roger Corman's Concorde/New Horizons period, a company chiefly known for its low-budget exploitation films, though he occasionally dabbled in more serious fare (e.g., 1963's The Intruder, which he directed, and later Akira Kurosawa and François Truffaut movies that Corman's New World Pictures distributed). I'd love to know what attracted him to this environmentally conscious story about the Amazon rain forests. The screenplay is co-credited to "Margo Blue," in fact a pseudonym for underrated actress Luana Anders, who had a long association with the producer-director (and, later, Corman disciples like Jack Nicholson and Dennis Hopper). The project may have originated with Anders, or Corman may have hired her to rewrite or polish the script. Quirky WGA billing suggests the former, and that Catherine Cyran and Beverly Gray, both associated with Concorde at the time, worked together to rewrite Anders's script rather than the other way around, though I could be wrong.

In any case Fire on the Amazon is far better than its current 3.3 IMDb rating would suggest. It's sincere and surprisingly authentic, generally well-directed by Luis Llosa (Anaconda) with excellent location work, though its main character, an intensely irritating photojournalist played by Craig Sheffer (A River Runs Through It), is ill-conceived and Sheffer himself is miscast. It is, however, a real movie far removed from the usual Corman schlock, something everyone associated with it can be proud of.

Anchor Bay's release is prominently billed as "Unrated" yet runs just 78 minutes, the same as the "R-rated" cut (apparently 30 seconds of "hot stuff" was added to Bullock and Sheffer's sex scene), while a 102-minute version reportedly exists. The transfer is reasonably good with decent Dolby TrueHD 5.1 stereo, adapted from the original Ultra-Stereo release. A video promo, mistakenly billed as a "trailer" (well it is, just not a theatrical one) is the lone extra feature. 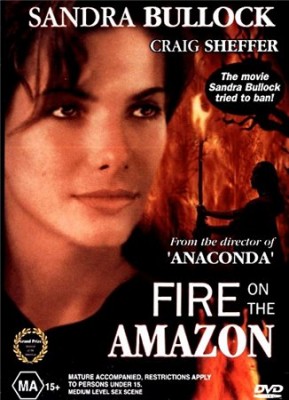 It's not clear whether this film was even released theatrically in the United States. This video cover art was the closest I came to finding original ad art.


The story is set in Bolivia, where Rafael Santos (Eduardo Cesti) - leader of a group of rubber tappers and other farmers opposed to the destruction of the rain forests by rich cattle ranchers - is assassinated under mysterious circumstances. Corrupt police beat a confession out of a local Indian they later murder, claiming their prisoner "committed suicide," but neither obnoxious photojournalist R.J. O'Brien (Sheffer) nor Rain Forest Preservation Society worker Alyssa Rothman (Bullock) is convinced. They decide to follow Ataninde (Juan Fernández), leader of the local tribe that resides deep in the forest, hoping he'll provide them with definitive proof of the alleged assassin's innocence. Meanwhile, a pistoleiro (Ramsay Ross), working for the cattle ranchers, is on R.J. and Alyssa's trail, determined to murder them both before the real story gets out.

Working against Fire on the Amazon's success is the abrasive R.J. character; the plot more or less revolves around his enlightenment, from naïve ugly gringo ("Hey, amigo," he says petulantly, "I'm an American!") to rain forest advocate, but it doesn't work. R.J. is pretty obnoxious even late in the film and does everything possible to piss off all of Bolivia. Sheffer, top-billed over Brad Pitt in Robert Redford's film of A River Runs Through It, filmed after this but released first, is a decent enough actor, but with his John-Malkovichy features and unpredictable intensity has none of the roguish charm that might have made this unsavory character a bit more palatable. (Come to think of it, Brad Pitt might have pulled it off.) Adding to the irritation is R.J.'s look; he dresses like Hall & Oates and has long curls rivaling Sandra Bullock's.

Bullock, firmly in a secondary role is excellent, delivering a confident performance that hits all the right notes. She's believable and it's obvious watching the film that she's an actress poised for bigger and better things.

The film doesn't much resemble the usual Corman production, though it does include a superfluous sex scene that might have been added at his insistence. R.J. and Alyssa sip an Indian mind-bending aphrodisiac and before long are naked and passionate. Much is suggested but Bullock's assets are discreetly hidden for the most part.

The film has many fine qualities: Santos's funeral is vividly shot with much verisimilitude, and there's good use of the South American locations throughout, locations that really impress in high-definition. The various political factions and grievances involved - the rubber tappers and Indians vs. cattle ranchers - are simplified but reasonably realistic, and scenes of protestors' passive resistance have an authentic feel. It's not a bad film.

Filmed for 1.85:1 projection, I suspect that at least some of the critical drubbing Fire on the Amazon has received through the years can be traced to a lack of (or extremely limited) theatrical release, with many viewers seeing this for the first time on inferior VHS tapes, drawn by Bullock's (and, at the time, Sheffer's) newfound fame. In any case this 1080p presentation is pleasant enough, showing the locations to good advantage and even including a visually arresting image here and there. The Dolby TrueHD 5.1 audio is fine for an early-'90s release originally in Ultra Stereo, the poor man's (or distributor's) Dolby Stereo. The disc is region "A" encoded and includes optional English subtitles.

No extras are listed on the box but what's billed as a "trailer" is. Actually, it's a video ad with video-supered titles, though possibly using a theatrical trailer edit as its starting point. Whatever the case, better than nothing.

Though far from perfect Fire on the Amazon is still far superior to, say, the laughable (and $55 million-dollar) Medicine Man (1992), the would-be rain forest epic starring Sean Connery and Lorraine Bracco. Sincerity and competent lower-budget filmmaking go a long way in this case, and while it's hardly a film for the ages, it's Recommended.